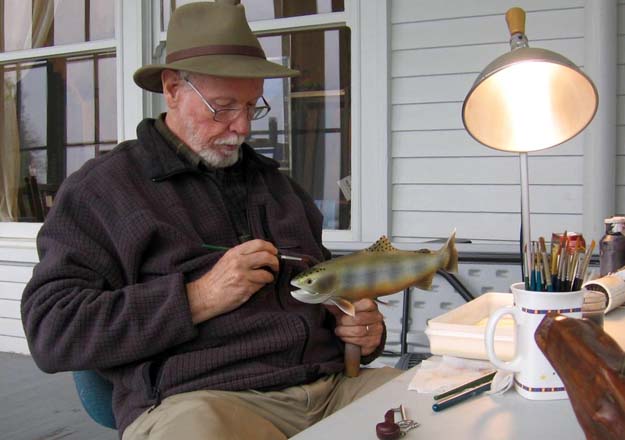 Here, Jim puts the final touches on another commissioned trout. All images are provided courtesy of Jim Wiley – published here with permission.

[dropcap]P[/dropcap]rovidential is not a word that I’d connect with the “social” internet, but serendipitous it was – stumbling over Jim Wiley on Linkedin. I recall leaving a message about wanting to profile him and his art. I love carved fish and birds or well-sculptured anything. His qualifies as remarkably well sculptured, as you’ll see.

Subsequently, we chatted by phone, then committed to let’s do this, and began fumbling our way through Photoshop, Messenger, Facebook, and Linkedin before simple emails salvaged the ingress and egress of data. Jim with more stamina than yours truly.

As you scroll down, you’ll see that it was worth slugging it out in cyber “code” to see what he does to wood.

The conversation with Jim Wiley

Fly Life Magazine.com: When did you discover your love for the natural world? Did it start with fish?

Jim Wiley: My education began on Richland Creek in Nashville, Tennessee at about six years of age. I lifted every rock or log to see what was under them.

I learned that crawfish pinch, snakes bite, wasps sting, and helgramites make good fish bait. My dad bought me one of those telescopic steel fly rods, and that became my favorite companion, other than Shag, my Wire Harried Terrier. My quarry was green sunfish and long eared Sunfish.

FLM: Remarkably, your wood carving and painting fish started at age 65 – expand on that – how and when did you start down your path as an artist?

Jim: Around 1970, my wife Wanda and I started a business dealing in antique fishing and hunting collectibles. It was very successful, and we pursued it for about ten years before moving to Tennessee. Around then, eBay came along and it became difficult to find and market our findings at a profit.

We loved the business, and I decided that I needed to be able to produce something. It led me to learn how to paint wildlife art which I presented on barn wood.

Later, at the Southeastern Wildlife Festival in Charleston, South Carolina, I was introduced to carving… sawdust has been flying ever since.

Jim: I’m a member of Trout Unlimited and have been for many years. My donated works have raised thousands of dollars for cold water conservation. My favorite restoration is brook trout habitat in the Great Smoky Mountains.

The very first purchase of one of my works sold at a benefit auction for just over $600. It was titled
“Little Brookie.” That event became my wake up call – maybe I was onto something with my art?

FLM: Has your career taken you on great fishing trips? Have you a favorite trip or destination? What type of fishing interests you most?

Jim: Early in my art adventure, I attended The Federation of Flyfishers Conclave in Gatlinburg, Tennessee. A smiling young gentleman approached me and said:” I’d love to sell your work in my flyshop in Helen, Georgia. I have over a mile of private water that you can fish as my guest when you come down to deliver some of your beautiful works.” I thanked him, saying, “I’d be interested in that.”

When I got home from the conclave, I got busy in my studio and kinda’ forgot about it. A few weeks later, I mentioned the encounter to my brother Bill. He said, “Have you gone?” When I said no, he shouted, “Go, ARE YOU CRAZY, this is a BIG deal, go today.”

I went, and I caught the biggest Trout I’d ever caught in my life!

I’ve been there more than once – not only is the fishing great, but Jimmy Harris, owner of the Unicoi Outfitters is the nicest guy you’ll ever meet!

FLM: If you had to chose just one of your subjects as your “favorite” which would it be?

Jim: Absolutely no doubt about it, it’s the brook trout! The beauty of it is from the mind of God, and he has blessed me with a gift to create an imitation.