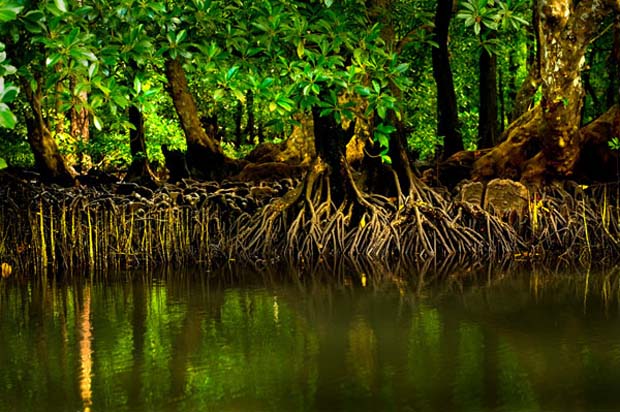 By Skip August 30, 2013 One Comment
As most Fly Life Magazine.com readers know, mangroves are safe haven for juvenile tarpon, cover for ambushing snook, and a good place to find prowler reds.

August, 2013  |  by: Darci Palmquist
[dropcap]I[/dropcap]f you’re the gambling type who likes to beat the odds, here’s a tip: In the race against climate change, place your money on mangroves. Along the coastal waters, land and sea intertwine in the tangle of twisted mangrove forest that encircles the islands of Micronesia. Photo by Ami Vitale.

According to a new report from The Nature Conservancy, Wetlands International and the Cambridge Coastal Research Unit, mangroves could be able to keep pace with sea level rise in some places. The authors found evidence that mangroves can build up soil at rates of 1 to 10 mm per year. In many places that rate is well within the range of the current 3 mm per year rise in sea levels, potentially allowing mangroves to remain in place even as rising seas threaten to engulf them.

Mangrove forests are trees and shrubs that thrive in the tidal waters of tropical or sub-tropical coastal areas — in the United States, they are mainly found around Florida and up into the Gulf Coast. If you’ve never seen a mangrove, picture a motley chorus line of tangled tree legs rising up from brackish water.

But they’ve seen better days: Scientists estimate that 35% or more of the world’s mangroves have been lost in recent decades, decimated by coastal development. Yet mangroves are also increasingly being recognized for their value as natural defenses against storm waves, as carbon storage and as nurseries for many marine creatures such as shrimp, crabs, fish and more.

How Do Mangroves Build Up Soils?

The report aims to present a picture of what science knows about soil build-up currently and what still needs to be known. It’s an area that has received little research attention to date.

“Mangroves have complex roots that help to trap and bind the sediments on the soil surface, while the unseen growth of roots beneath the soil surface helps build up the soil from below,” explains Dr. Anna McIvor, lead author of the report and a scientist at the Cambridge Coastal Research Unit. Diagram of a mangrove tree and the soil beneath it, illustrating how surface elevation change (soil build-up) may occur over time.

The processes that influence soil build-up – such as sediment deposition, erosion, root growth, decomposition, the burrowing of crabs and other animals, and more – are complicated, and how they interact is not widely understood. Moreover, a multitude of variables can influence the rate at which these processes occur in any given location. What’s most needed, say the authors, is more data on soil elevation changes, over longer time periods and from more varied locations.