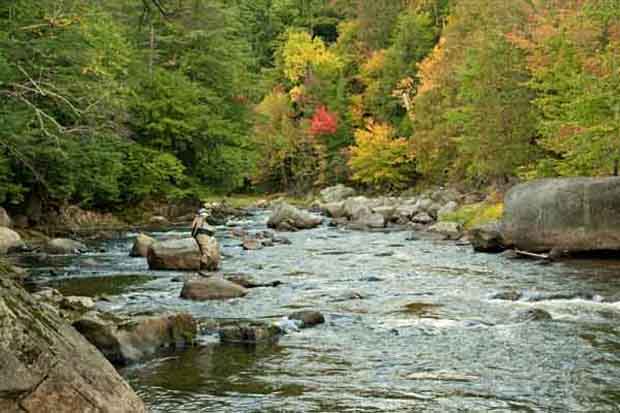 Where the River Meets the Road / By Matt Miller, senior science writer for the Nature Conservancy The brook trout is the jewel of streams in the eastern United States. Photo: Lisa Godfrey

[dropcap]A[/dropcap]s you drive around the Adirondacks—enjoying the jaw-dropping scenery—you can be forgiven if you don’t notice road culverts.

From a car, it might look as if you’re passing over a small bridge. Underneath, though, is often a metal tube channeling water—a tube that may create a barrier for native fish. While these culverts may escape your attention, for fish they are a matter of life and death.

That’s why the Conservancy is working with the New York State Department of Transportation and local highway departments to provide better fish access through culverts – a step that may help tangibly address some of our most pressing conservation challenges.

Relatively simple fixes in culvert design could reconnect miles of habitat for brook trout, one of the most iconic fishes of eastern streams, and prevent flooding during severe storms.

“Culverts may not be sexy,” says Michelle Brown, conservation scientist for The Nature Conservancy’s Adirondacks Chapter. “But improving them is a concrete step we can take to address climate change and connectivity for native fish.”

Jewel of the Forest Stream

Fly fishing for brook trout draws many anglers to Adirondack waters like the Ausable River.

In some ways, that has made them even more cherished by anglers and conservationists, who consider them not only quarry but an indicator of ecological health. The angling literature is full of purple prose celebrating the dwindling brook trout, but perhaps no one put their ephemeral nature better than Cormac McCarthy in his apocalyptic novel The Road:

“Once there were brook trout in the streams in the mountains. You could see them standing in the amber current where the white edges of their fins wimpled softly in the flow. They smelled of moss in your hand. Polished and muscular and torsional. On their backs were vermiculate patterns that were maps of the world in its becoming. Maps and mazes. Of a thing which could not be put back. Not be made right again. In the deep glens where they lived all things were older than man and they hummed of mystery.” Except, in some places, brook trout streams can be made right again. And perhaps nowhere is that more true than in the Adirondacks, the six-million-acre state protected area in northern New York.

The Adirondacks still have the extensive forest habitat and clear streams for brook trout to survive and thrive. Many streams have what fisheries biologists call heritage-strain brook trout—trout strains that have not been altered by stocking, fish perfectly adapted to specific watersheds, specific streams.

“Brook trout have been here since glaciation,” says Brown. “They’re a major draw for visitors to this area, helping to feed our economy. But even here, brook trout face challenges.”