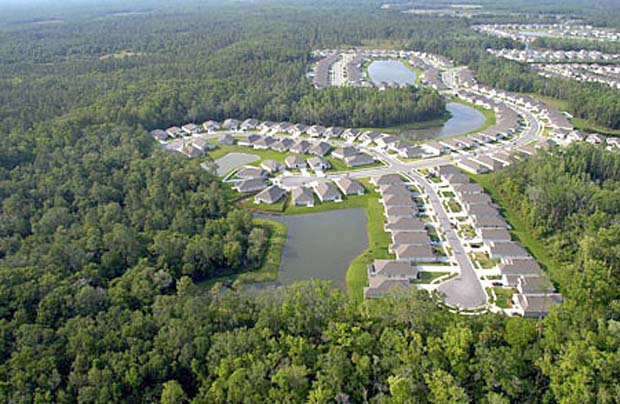 Conservation: They just won’t say NO!

[dropcap]O[/dropcap]ver a four-year span, the United States lost more than 360,000 acres of freshwater and saltwater wetlands to fierce storms, sea-level rise and booming development along the coasts, according to a newly released federal study. The disappearance of so much grass and forest marsh on the edge of waterways is a disturbing sign that government projects to restore wetlands are failing to keep pace, environmentalists said, as storms intensify, the sea level creeps up and development paves the way for rising coastal populations.

Saltwater wetlands help buffer sea surges that cause flooding during powerful storms along the coasts — such as Hurricane Sandy last year — and freshwater wetlands soak up storm-water runoff that often causes sewers to overflow.

They also serve as nurseries for numerous species of fish and assorted marine life, while providing habitat for three-quarters of the nation’s waterfowl and migrating birds. Nearly half of endangered species depend on them to live.

“They are getting it from all directions,” said Tom Dahl, lead author of the study funded by the U.S. Fish and Wildlife Service, the National Oceanic and Atmospheric Administration and the U.S. Environmental Protection Agency.

Study areas include the Gulf of Mexico, Atlantic and Pacific coasts, the Great Lakes and other fresh inland waters.

In the Chesapeake Bay region, Maryland has lost 60,000 acres of wetlands since the 1940s because of population growth and farming, and in 1997 it launched a bid to restore them, according to the state’s Department of the Environment.

Virginia estimates that half of the wetlands that existed in the colonial period have been lost over time to farming and development. There is an ongoing effort in the state to restore and add to the 1 million acres that remain, according to the Virginia Department of Environmental Quality.

Across the nation, wetlands have been converted to open water in some places and to mud in others. They include mangrove swamps, salt marshes, freshwater forested swamps, shrub depressions and wetlands floating on the edges of rivers.

The disappearance of marshes during the period covered in the study — between 2004 and 2009 — represented a 25 percent increase in the rate of loss in the same areas from the previous survey, which covered the six-year period between 1998 to 2004.

Storms and wetlands have waged an epic struggle on the coasts for eons. What’s relatively new, and detrimental to the wetlands, is an explosion of coastal residential and business development, along with coastal farming, that drain water from the wetlands or fill them with dirt for agriculture, parking lots, housing and retail stores.

As a result, sizeable chunks of wetlands die. Surviving wetlands are battered by rainwater runoff pouring from newly built surfaces such as driveways and roads, and much of that water is polluted with garbage, toxins and fine particle sediment. Wetlands can’t handle the added deluge.

“The plumbing of the whole system is altered,” said Dahl, a senior scientist for wetlands status and trends for the U.S. Fish and Wildlife Service.