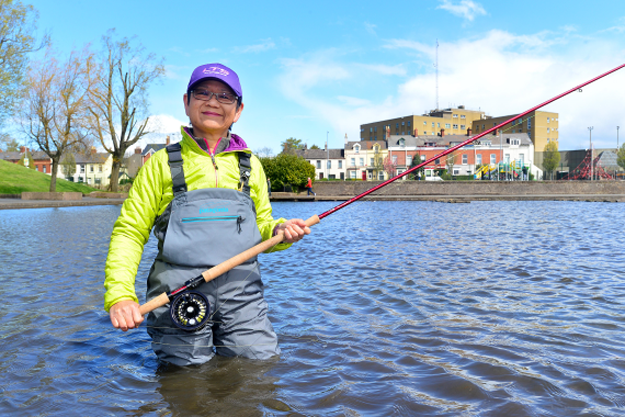 Being underhanded is a good thing. No, no, not politics!

Being underhanded is a good thing when casting two-handed

[dropcap]I[/dropcap]n Europe, the American and Canadian West, Alaska, and in clusters of U. S. and Canadian anglers that fish the Great Lakes or more easterly the Atlantic salmon, two-handed rods are understood to be tools that improve fly fishing results and expose more “fishy” water without the fear of having the forest eat all your flies. Too, wear your ‘arse’ out casting nine footers overhead all day or the limited usefulness 14-foot Spey two-handers. Where the difference lies between Europe, the origin of two-handed fly fishing and the rest of  North America is two-fold.

First, Europe uses a lot of shorter Spey rods or switch rods. In Europe, they are rods that are no longer than 11-feet. Paradoxically, the name “switch” was coined by fly rod builder R. B. Meiser in Oregon. His first switch rods were 9’ 9” long (still selling – great boat rods) and had a handle to accommodate two-handed casting.  In his shop and industry-wide, that length grew to 11-feet – about the limit of comfortable rod carry, two and single handed casting.

Second, Europe has developed a mastery of two-handed casting. It’s a much more relaxed, less tiring and more efficient than “generally” applied in the U. S. That applies to both the shorter switch rod and longer Spey rod.

The switch rod revolution has come and somewhat gone – staying steady out west in the U. S. and in Europe with revivals – like Winston’s renaming its’s newest switch rod entrants, Micro Spey. See our story on that subject . . .

Why are switch rods not fully embraced here in the U. S.?

Well, it’s hard to get anything new East of Denver, Colorado (except some Great Lakes folks) a decent tryout. But that might not be hard to understand. There are none in stock to try out at almost any fly shop you visit. That’s none in stock nor planned to be. And as a last swipe – soundly pooh-pooed in defense of the shortcoming. For example, go to any fly shop, let’s say in New Orleans, and ask for a 7-weight over the length of 9-feet. What is the likely response? If you want to know Webster’s definition of a blank stare – you’re lookin’ at it.

The spiritual experience of a switch rod is in the casting. It is sooo much more comfortable to cast than almost “any” single handed rod made. There is no need for the confounding double haul with a switch rod (OPST Commando Head with a Lazur running line). And there is no need even to explain rod loading… it’s beyond easy to feel. The right fly line, of course, plays mightily into the casting equation of “any” fly rod.

Critics say, “It’s not a true Spey rod.” Dah. Realistically, it’s not the best short pitch rod (35-feet or less)… nor are a lot of 9-footers and no Spey rods. Probably the single most significant drawback is as mentioned – in the eastern U. S., try and find one to test drive, almost impossible. Magenta arrow – it’s a loose dominant hand (if right-handed) that enables an easy offhand (fulcrum) pull back to shown position (yellow arrow). Many U. S. anglers try to create power by “pushing” with the dominant hand (magenta arrow) and keeping offhand close to the body.  The outcome is a short, inaccurate cast, and very tiring. The power and control come from the offhand’s two fingers hold “pulling” the rod back to the body and letting the enabler dominant hand stay (relatively) as shown.

Scandinavians do it better

Take a look at this YouTube video of Scandanavian two-handed casting style. The technique shown is perfectly adaptable to switch rod line management and casting. FYI: The angler, Göran Andersson is one of Europe’s well known and tournament tested fly anglers. Sort of like Lefty Kreh and Steve Rajeff folded into one.

This video is one of two straightforward tutorials on HOW TO CAST A TWO HANDED FLY ROD. What separates this video from so many others on two-handed casting is the use of Anderson’s hands. It’s the off-hand that makes the magic happen with the loose hold by the dominant hand the enabler. Yup, that’s it, but watch anyway.