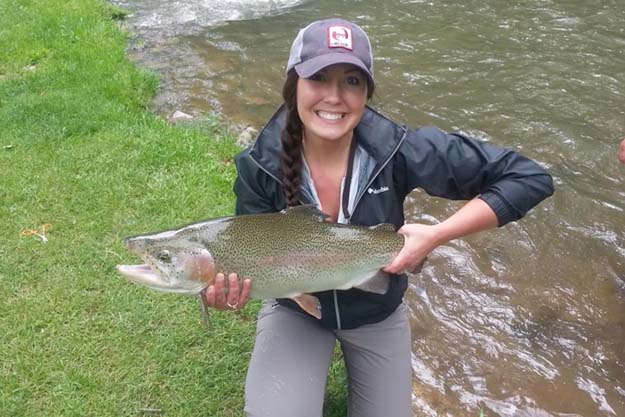 Jessica Callihan: Look up resilience, you’ll find her there

Jessica Callihan is a wounded warrior with a lot of metal pins, screws and parts. She bonded with fly fishing, expresses it through her art, and contributes by carrying the fly fishing message to other vets.

[dropcap]W[/dropcap]hen I spoke with her it was Veterans Day weekend. She had just gotten back from a week in Washington, DC, testifying before Congress, along with others, about veterans’ matters. She was encouraged by responses, but not by fellow vet Ryan Zinke, Secretary of the Interior, whom she said only seems dedicated to matters critical to extractors of oil and gas interests.

Why I asked, would you embrace fly fishing with such a passion? She said fly fishing led to a better life experience, a temporary escape from pain, and the out of doors experience she was born to.

What she said could have come from a few lines in David Mitchell’s book The Bone Clocks:

“If you don’t want the fish, why do you catch them?” A few seconds pass. “For the quality of the conversation.”

If she were driving on an unfamiliar road and came to forks that require a single, life-changing choice, which one would she choose? One fork well traveled with a smooth, weedless surface? The second fork showing some tire tracks but weeds growing on the centerline? The third with no tire tracks, no sign of travel and a steep mountainous incline? Yup. You’re right, that one.

You can tell her how to do anything, she’ll listen and embrace learning, but don’t tell her this is what everybody does and it’s the only way. Yup. That’s her.

Jessica walks with a cane. Pain is her personal companion Annette Brun of Scripps Networks Interactive, left, talks with Jessica Callihan as volunteers begin to build an art studio and ramp for Callihan at her home in Greenback (Tennessee) on Friday, Sept. 30, 2016. A Navy veteran who was injured during her service, Callihan had 10 surgeries and is now living with chronic regional pain syndrome. Photo by Amy Smotherman Burgess of News Sentinel, Knoxville, Tennessee.

A Michigan farm girl with a full academic scholarship to Western Michigan skipped her last two years to serve her country post 9/11.

In 2008, E3 Callihan, Aviation Electrician, stationed in Jacksonville, Florida, suffered a career-ending injury that shattered her right leg, earned 11 surgeries, five years in and out of a wheelchair, and unimaginable pain.

“I was always a goal-oriented person,” she told Tee Clarkson. “My goal became getting up in the morning and not wanting to commit suicide.” – Drake Magazine

She chose to live and to gamble

The gamble, if it worked, would save her leg. She opted for an implanted, self-triggering neurostimulator that sends electrical signals to treat pain.

It worked, she saved her leg

Unorthodox rehab, she decided, would at least get her outside. Farm girls are not fond of couches, TV, neon signs, glass and steel canyons that block out the sun, or of miles and miles of asphalt.

Out of doors all started again for her with an engagement at Mossy Creek, Virginia. It was at a Project Healing Waters camp.

Very coordinated and an eager learner sent her where she’s always comfortable, to the head of the class, but that had nothing to do with healing.

Funny, how little things can mean so much “Out of the Depths”

Healing came when she got swept into the challenge of fly fishing, the beauty of it, being in the water, listening to it, sensing the nature around her. She said, “I caught a trout, saw the vibrancy of its colors and watched it swim away. I felt human again… touching a trout.”

What had happened she said was; “Although I knew the pain was there, I could not focus on it. It was in the background.”

Along with painting, the act of fly fishing has become another neurostimulator. But like the stimulator itself, the parole from pain does not last a long time; it always has a window that closes.

The lady has no fear

After a time, she decided to take advantage of one of the best programs the government has ever come up with, paying for veterans’ college. In 2012 Jessica enrolled at Maryville College. A small, privately funded institution of higher learning with exceptionally high academic recognition and a world-class arts program.

The art of being Jessica. Jessica, wholly untrained or self-taught, a dabbler actually, with an absence from art since high school was in a college art program with academically trained professors. It seems unmanageable, but she just kept confounding them with, “Well, why not do it this way? Put the last layer on first.”

Jessica has had many mentors on her art journey. One of special importance to her is Thom Glace. Thom is one of the top watercolorists in the world. Jessica and Thom share a fascination with trouts, bugs, and the natural world, but work, mostly, in different mediums.