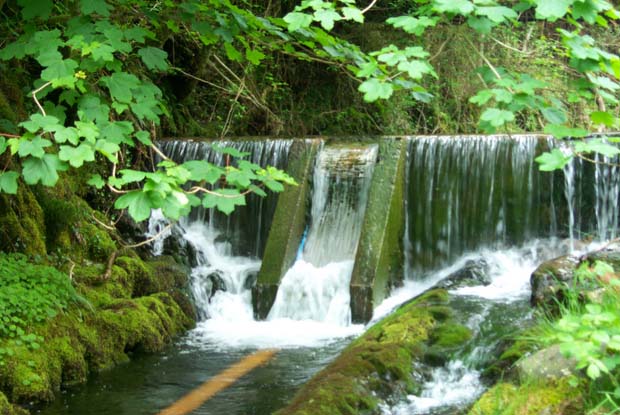 Sustainable Hydropower: Are Small Dams Really Better for the Environment? Small hydropower dams (often defined as below 30 MW) are frequently presumed to be low impact. However, this dam, Veazie, on the Penobscot River, had a capacity of 8.4 MW and was a major barrier to migration for the most important population of Atlantic salmon in the US. It was removed in 2013. Photo: ©Misty Edgecomb/TNC.

When it comes to dams, is small beautiful? Or are these dams tiny but terrible?

When it comes to hydropower, Schumacher’s aphorism is often interpreted literally and taken as an article of faith.

It’s easy to see why: small hydropower generally evokes a quaint New England mill dam, in stark contrast to the behemoths—hydro dams such as Hoover, Kariba and Three Gorges—that change the face of the earth as viewed from space.

But does small hydropower warrant its reputation as being environmentally friendly? Beyond the elegant aphorism, what’s the evidence?

Answering that question is increasingly urgent. Globally, dozens of policies reflect an underlying assumption that small hydropower is “green.”

In the US, several states with Renewable Portfolio Standards disallow electricity from large hydropower dams but embrace power produced from small projects (defined inconsistently as a megawatt capacity less than 30, 50, or some other double-digit number), in part due to a perception that small equals low impact.

The Clean Development Mechanism, launched under the Kyoto Protocol and intended to reduce greenhouse gas emissions, promotes small hydropower and streamlines its review due to perceived lower environmental impacts.

Countries across the globe—from China and India to Brazil and Mexico—have passed policies promoting small hydropower and subject its development to far less planning and regulatory oversight compared to large projects.

In one respect the answer is obvious: a 10 gigawatt project is going to have different—and much larger—impacts than a 10 MW project.  It’s like comparing apples to…apple seeds.

But that is not a terribly helpful insight. To be more useful, comparisons require scaling impacts to the energy that the dams produce.

A recent study (Kibler and Tullos 2013) looked at scaled hydropower impacts in the Nu River basin of southwestern China (the Nu becomes the Salween as it flows into Burma).  The researchers calculated impact per MW of capacity across 14 metrics between small and large hydropower projects (with small being below 50 MW, as defined in Chinese policy).

They found that small hydropower dams had greater impact per MW for 9 of the 14 metrics, including length of river channel affected and impact on habitat designated as conservation priorities.

These results were summarized in media reports as, “small dams can pose a greater threat to ecosystems and natural landscapes than large dams.”

Because their study site includes one of China’s last major rivers without a large dam across it, this isn’t necessarily the most appropriate, or helpful, headline from their study.

After all, a 9-5 score in “impact metrics” in the David(s) vs. Goliath battle of the hydros isn’t as straightforward as 9-5 in runs for baseball:  perhaps cutting a mainstem river in half, as a large dam can do, outweighs all other impact metrics, like catching the golden snitch in Quidditch (don’t laugh, I couldn’t think of another sport with a scoring event so disproportionate).

But, if nothing else, these results clearly indicate that small hydropower can’t get a free pass and be presumed to be environmentally benign.

By scaling impacts to power capacity, the results are relevant to a somewhat obvious problem with small hydropower projects: the cumulative impacts of their proliferation across a river basin or region.

But even more disconcerting than cumulative impacts are examples illustrating that even individual small hydropower dams can cause significant impacts.

In other words, just like two-year old children, small hydropower dams don’t require strength in numbers to be naughty; they can be tiny and terrible on their own.  And like an overtired toddler on a plane stuck on the tarmac, a small dam’s bad behavior usually results from being in the wrong place.