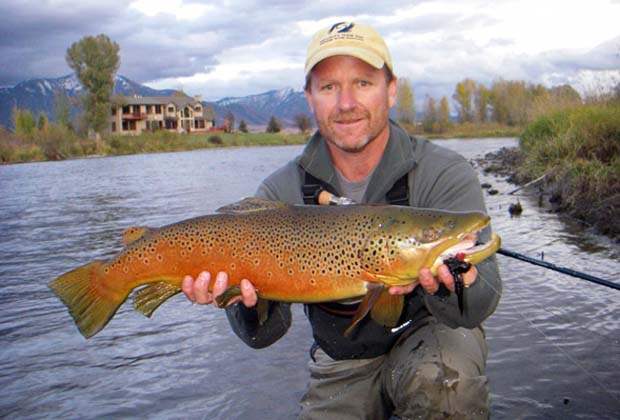 Spring is not that far away and drop shoting in dirty, high water can be the best fishing of the year

There are not dozens of ways to utilize two flies, or three, on one leader. That is of course, if you are interested in caching rather than just fishing. Fairly recently, the word ‘Czech’ nymph fishing has crept into editorial parlance of a few upper-crust trout publications, selling the idea that is a new “invention.” Well it is not. Thirty five years ago it was called what is: drop shot fly fishing. Even the hardware guys adopted it and used flies, and that too was decades ago.

Because you cannot see does not mean the fish cannot see

The trick to successful drop shot fly fishing is keeping two flies in the zones, or levels, that trouts feed in. One, a midge, caddis larvae, or mayfly nymph just a few inches from the bottom and two, an emerger 12- to 16-inches above that. There are, of course, a gazillion named “nymphs.” Kelly Galloup, owner of  Slide Inn Lodge (Madison River, Montana), explains there are only three types to concern yourself with when drop shot fishing: midges, caddis larvae and mayfly nymphs (and stoneflies).

Twelve pound test butt section at 3-feet long followed by 3X at 3- to 5-feet long (difference = water depth). The weight is at the bottom of the rig and touches the bottom as the midge, caddis larvae, or mayfly nymph is at 6-inches above floor and dropper fly is 16-18-inches above that.

Kelly started his fly fishing career at the age of 13, tying flies for the local tackle shop. He started guiding at the age of 16 and is still guiding to this day some; well lots of years later. He owned the Troutsman fly shop in Northern Michigan for 20 years. He sold the Troutsman and moved to Montana where he and his wife Penny bought the Slide Inn lodge on the banks of the Madison River. Kelly has written two books Modern Streamers for Trophy Trout and Cripples and Spinners, and has numerous DVD’s on tying and fishing. He has over fifty nationally recognized fly patterns that are sold world wide. He is also a line and rod designer for Scientific Anglers and St Croix rods. Kelly has been published in nearly every major fly fishing periodical in the country and is one of the Editors a large for Fly Fisherman magazine. Kelly is also the hosts of Fly Fish TV on the VS’s Network. Kelly is one of the most sought after speakers in the country and spends much of his winter months speaking for clubs and Sports shows. In 2003 Kelly received the living legend award from the FFF, and in 2007 the Charles E Brooks memorial life award.