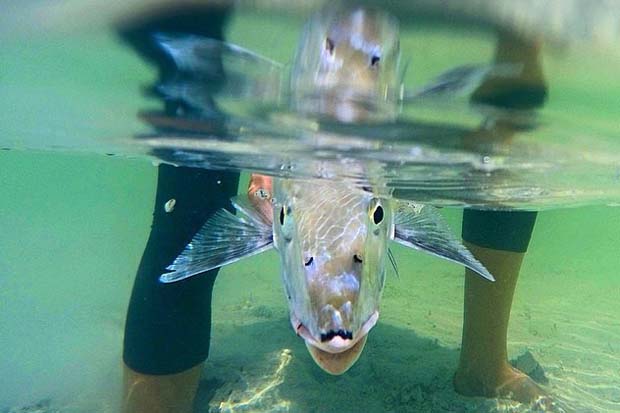 The Bahamas: Part 2- The battle for bonefish and the future of the Bahamas

The negative outcome is a historically guaranteed one Prescott Smith with his famous father, Charlie Smith, inventor of the Crazy Charlie Fly and first Bahamian lodge owner. Prescott is the man behind the controversy and is the president of the Bahamas Fly Fishing Industry Association. Prescott owns Stafford Creek Lodge on Andros Island.

The man behind the misnomer tilted “New Fly Fishing Regulations to Improve Quality of Visitor Experience“ is politically astute. Over the past several years, according our interview with him at the 2011 BTT Symposium, he began traveling to all of the out islands of the Bahamas and selling the importance of protecting bonefish and promoting catch ‘n release practice.

He is passionate about preserving the Bahamian fisheries, but interlocked is his populism theme. Populism ‘always’ leads to protectionism followed by economic failure and then, political chaos. It has happened in the Bahamas before as well as many other countries.

In Part 2 of The Battle for Bonefish and the Future of the Bahamas, Beau Beasley, writing for  Marshal Cutchin’s MidCurrent, shines more light on a train wreck seemingly waiting to happen. [dropcap]T[/dropcap]he island nation of the Bahamas boasts the largest saltwater flats in the entire Caribbean, reputedly ten times larger than those of Mexico. Countless celebrated saltwater species—including bonefish, tarpon, permit, snook, crabs, shrimp, and lobster—call these flats home. Protecting the future of these flats in perpetuity is, unsurprisingly, of paramount importance to interested stakeholders, who include Bahamian fishing guides and lodge owners, governmental officials, and all other citizens who benefit from the nation’s sporting tourism.

This article is part two of a series on the controversy surrounding proposed conservation legislation in the Bahamas. From the beginning, Bahamian legislators have faced strong opposition to the proposed Fisheries Resources (Jurisdiction and Conservation) Act, which seeks to more closely regulate fly fishing guides and lodges and establish a saltwater conservation fund paid for by the sale of fishing licenses. Among its most vocal critics are foreign lodge owners who fear they are about to be regulated out of business, and local fly fishing guides, many of whom have invested their life savings—and a lifetime’s worth of sweat equity—in their Bahamian businesses.

This article examines critics’ complaints about the proposed measure, which include:

Its protectionism has resulted in more than a little bad press for the island nation;

The legislation talks a good game about conservation but is woefully short on specifics;

No mechanism is in place in the legislation to account for the funds collected from the sales of fishing licenses; and

The article also examines ongoing conservation work in the Bahamas and provides an overview of the bill’s possible future.