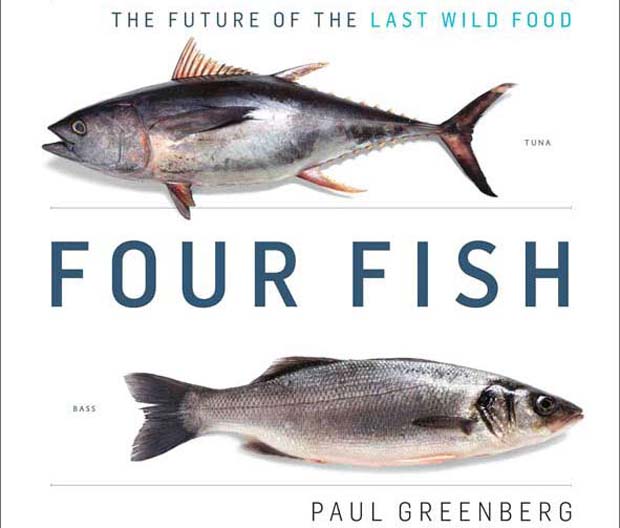 [dropcap]A[/dropcap]week or so ago while doing “spring” cleaning in late July, it dawned on me that I might have hoarder tendencies. Is keeping stacks of old newspaper articles and magazines that appeal to a personal appreciation of good writing, conservation and fly fishing, a signal that one is a hoarder? Sifting through old newspapers articles and magazines stories was, nonetheless, like visiting old friends. A few hours into the job and two huge, full garbage bags later a New York Times (NYT) Book Review magazine came to light. It was a review written on July 29, 2010 by Sam Sifton. NOTE: In July of 2010, the date of the review, Sam had just been installed as restaurant critic for the NYT.

The book review was about Paul Greenberg’s, at the time a new book, titled Four Fish. An important, highly researched and easy to read work. “Four Fish” takes as its subject global fisheries market and the impact human decisions have had, and continue to have, on a fast track to disastrous outcomes on the four of the most important wild fish: tuna, cod, sea bass and salmon. While the book starts out with facts of worldwide overarching by commercial fishing interest by independent countries like Japan (and others) makes a reader feel the need to take a handful of anti-depression pills. “Wild fish were once everywhere, of course, in such numbers as to astound. (And still, Greenberg reports, the current global catch of wild fish measures 170 billion pounds a year, “the equivalent in weight to the entire human population of China.”). Wild fish seemed to be, as Greenberg puts it, “a crop, harvested from the sea, that magically grew itself back every year. A crop that never required planting.”

Each of the four species is brought into view in HD and it ain’t pretty – looking down the road.

Greenberg, a NYT contributor, later on in the book brings into play some interesting optimism and that, along with some brilliant writing distinguishes Four Fish. He shows how we can start to heal the oceans and fight for a world where healthy and sustainable seafood is the rule rather than the exception.