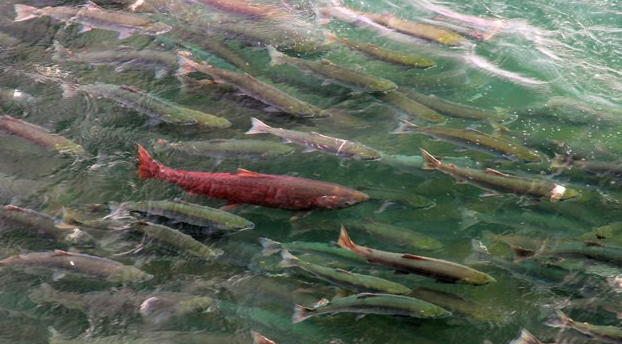 By Patrick Cooney / in Ecology: Organisms & Habitats / The Fisheries Blog

[dropcap]M[/dropcap]any fishes migrate long distances to spawn. In order to better understand these movements, scientists have classified these migrations into several categories.

Anadromous fish are born in freshwater, then migrate to the ocean as juveniles where they grow into adults before migrating back into freshwater to spawn. Examples: salmon, smelt, American shad, hickory shad, striped bass, lamprey, gulf sturgeon.

Catadromous fish are born in saltwater, then migrate into freshwater as juveniles where they grow into adults before migrating back into the ocean to spawn. Examples: American eel, European eel, inanga, shortfin eel, longfin eel.

Amphidromous fish are born in freshwater/estuaries, then drift into the ocean as larvae before migrating back into freshwater to grow into adults and spawn. Examples: bigmouth sleeper, mountain mullet, sirajo goby, river goby, torrentfish, Dolly Varden.

Oceanodromous fish are born near spawning grounds, then drift on ocean currents as larvae before settling as juveniles to grow into adults before migrating back to spawning grounds. Examples: black grouper, mutton snapper, goliath grouper.

Although these different types of migration classifications may be difficult to pronounce, they are important to understand in order to help maintain connectivity between critical habitats.

The Fisheries Blog was started in 2011 by a group of scientists who are professional fisheries scientists by day and communicators of scientific information by night. On The Fisheries Blog, we write popular articles and other short fisheries-related stories that are often inspired by the interesting topics that we hear about during the day.