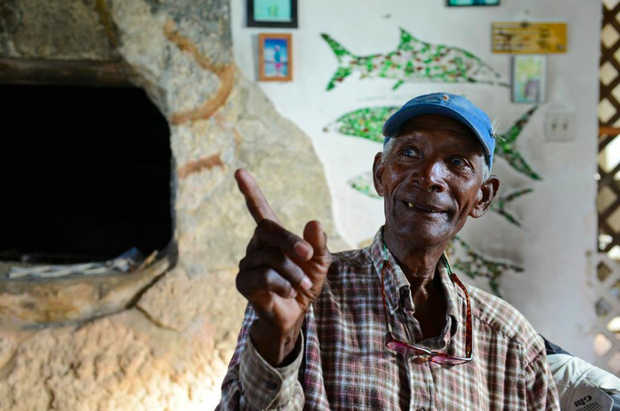 Origins of the Crazy Charlie Fly

[dropcap]W[/dropcap]hile some fly anglers believe that *Bob Nauheim from California invented the fly called “Crazy Charlie” it was actually invented by Charles Smith from Andros Island, Bahamas. Here’s how the fly came to be according to Charlie Smith: “One day, Prime Minister Pindling came down to the Small Hope Bay Lodge with Prime Minister Trudeau. Dick Birch (Canadian lodge owner – primarily a dive destination) and I were very friendly. Dick told me that the PM wanted me out there to cook and serve them both . . . The next day, Dick said to me, ‘Well Charlie . . . You have to take the two Prime Ministers fishing so you have to go to the drawing board.’ So I went to the drawing board and invented the Crazy Charlie Fly (Prescott Smith told FLM.com that the eyes were beads from military tags and the body was chicken feathers). The next day, I took Pindling and Trudeau fishing. Pindling caught two fish and Trudeau caught three. Pindling used to call me “Life.” The Prime Minister said, ‘Life, you let him catch three and I only caught two bonefish.’” I said, “Isn’t that what you taught me? We have to look after our guests! And that’s exactly how it all started with the fly.” He went on to say, “And from there, I gave my fly to Bob Nauheim, a guy I fished. He was the owner of Fishing International in California. He asked me if I would accept the name of the fly to be Crazy Charlie. So I wrote a letter saying yes and I signed it, and that’s how the Crazy Charlie fly started.”

Years later, when Bob Nauheim had popularized the fly, he returned to fish Andros and ended up staying where Prescott guided. Prescott said, “He asked me if my father was mad at him for taking all the credit?” Charlie Smith, now 78, was the first Bahamian to own a bone fishing lodge when he started Charlie’s Haven, a lodge on the water’s edge in Behring Point, Andros. Years later he took over the Bang Bang Club, a lodge built on a private cay. It became so well known around the world that corporate bigwigs to prime ministers sought out the privacy, solitude and bone fishing that the Bang Bang offered.

*Bob Nauheim, a popular figure in fly fishing, died in 2005.

The Crazy Charlie Fly stays in the fly box because it still seduces several species of flats dwellers; not the least of which are bonefish and permit. Today, there are many variations to the original fly which was built with whatever was available in thread, hook (hand sharpened); beads from a military ID tag and chicken feathers (hand plucked). Since then, tyers have improved the fly many-fold with new materials, tying techniques and plain old innovation.

Here’s Don’s recipe and instructions for the Crazy Charlie Fly:

1. Set the hook in the vise and sharpen as necessary. 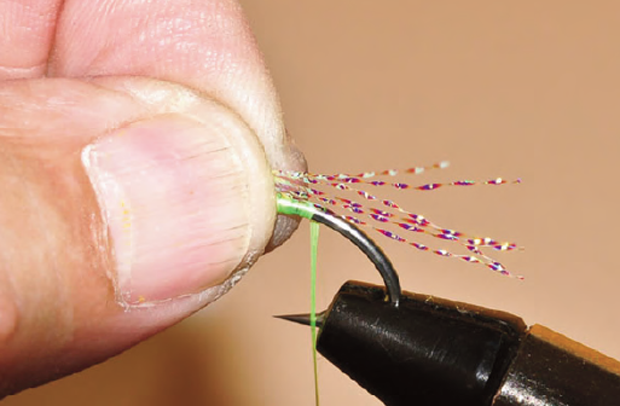 2. Start the thread between 1/8-inch and ¼-inch behind the hook eye. At about ¼-inch behind the eye set the bead chain eye on top of the hook shank and with a figure eight crossing of the thread wrap it in tightly and then make several courses under the bead chain to tighten the eyes. Wrap the thread to the bend of the hook. Tie in six or seven strands of Krystal Flash leaving an inch or so extending
behind the hook bend. Tie in the tip end of the V-rib so that when it is wrapped forward the curved side is on the outside. Wrap the thread forward to the front of the bead chain. Twist the Krystal Flash and wrap it tightly to the front of the eyes and tie it off on the hook point side of the shank. Trim the butt ends ofthe flash at the bend of the hook about ½-inch long.

3b. Wrap the V-rib around the Krystal Flash and hook shank. Make the wraps closely towards the hook eye. Tie it off just behind the bead chain. 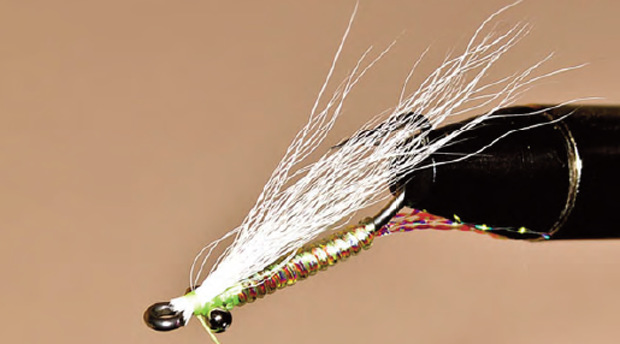 4. Flip the fly over with the hook point up. Fold the leftover flash back towards the hook bend and wrap it in. Cut a small amount of bucktail, trim the butt ends of the hair and soak them in cement. Tie in the bucktail so that the tips extend just beyond the hook shank.

5. Take a 2-inch piece of 16-pound Hard Mason mono. Fold it in half and pinch the bend into a sharp point. Turn the hook point down and slip the guard just behind the hook eye and wrap the thread across the weed guard and then reverse and cross in the opposite direction. Turn the hook point back up. Make a couple of wraps around the near leg of the guard, cross under the hook shank, pull tightly and repeat on the opposite side until the legs are where they defend the point of the hook. Whip finish a head and coat with head cement.