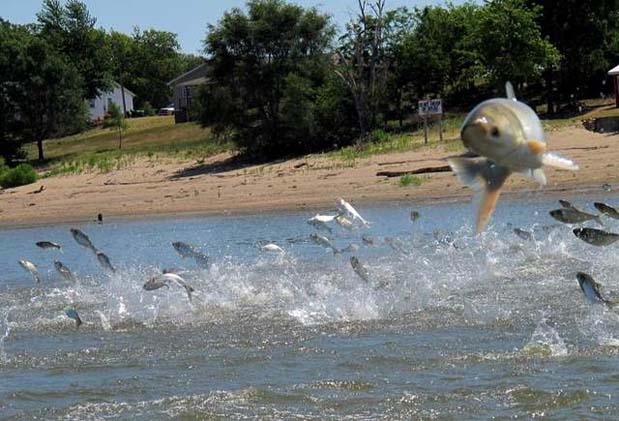 Opinion: Over 200 invasive species in our Keystone Fishery

Is America’s Keystone Fishery A City Block From Disaster?

A female Asian Bighead Carp can lay 2 million eggs a year. What does that mean for the future of Lake Michigan?

Twenty percent of the world’s fresh water surrounds us, and that’s great. It provides us multiple uses for recreation. Swimming, boating, canoeing, kayaking, sailing, SUP’s, and fishing. When I ask people from neighboring states where they like to go fishing, they always say they head up north and fish Michigan’s rivers and lakes. But, recent news of more eDNA, from Asian Carp, found in the Chicago shipping canal has me concerned.

How many more years are we going to spend doing research, wasting millions of dollars, looking for a way to prevent the impending doom of their arrival in the Great Lakes? If they do arrive, or [GASP] are already here in the Great Lakes, what amount of devastation will they cause on a billion-dollar fishery? Will anglers from the Midwest still come up and fish the Pere Marquette for salmon and steelhead?

We’ve been here before, invasive species are not a new thing. In fact, we have almost 200 invasive species of flora to fauna in the Great Lakes. We’ve been battling the sea lamprey since the late 40’s when the Welland Canal opened and nearly decimated a thriving Lake Trout and Whitefish fishery in less than half a decade. These days the FWS spends millions of dollars a year on research and containment of the vampire of the Great Lakes.

New residents from the Black and Caspian Seas have also taken hold in Lakes Michigan, Huron, Ontario, Erie and Superior. Round Goby and Eurasian Ruffe out-compete the common darter and native sculpins in the deep waters we love. They have a voracious appetite for eggs and have targeted smallmouth beds. Smallmouth bass have retaliated, finding a new flavor of the month, but can’t keep their population in check.

Zebra and Quagga mussels liter the fresh water sea floor, estimated at 4 quadrillion. Trying to wrap my mind around that number makes my medulla oblongata ache. Sure, they’ve filtered out the water in Lake Charlevoix and Lake Michigan, made it pretty and clear so we can see depths of 30 feet, but we need the phytoplankton in the food chain. This is where the story gets interesting.

You can only have ‘X’ amount of fish and organisms living inside a contained body of water. For simplicity, let’s pretend you have a 20 gallon aquarium representing Lake Michigan; you can have 20 one -inch fish, you can have 10 2-inch fish, or you can have five 4-inch fish. The aquarium can only hold ‘Y’ amount of food to support the food web, from basic plankton to higher-end organisms. When you take out the basic plant nutrients many organisms depend upon, your top level feeders will disappear.

Enter the Asian Carp: the Silver, Grass and Bighead carp. Their names are kind of misleading because they really are big minnows. They don’t feed on the bottom like other carp that we know in the Midwest . These guys are filter feeders that eat phytoplankton, plankton and diatoms. You can almost think of them as the whale shark of the freshwater seas. They can consume 20 to 25 percent of their body weight a day in micro-organisms (plants), and they grow at extremely fast rates, making them undesirable as a food fish for other predators.