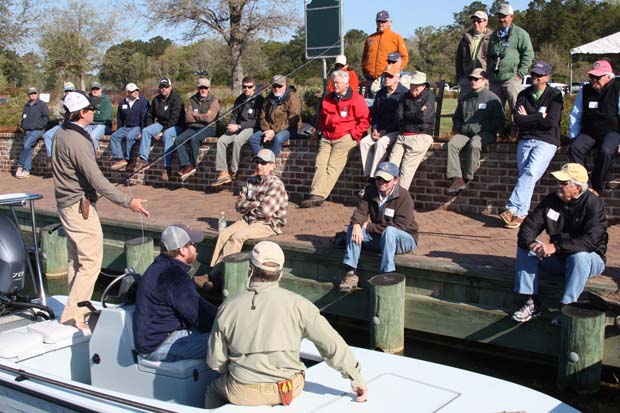 In hospitality, the chief thing is the good will (Greek Proverb)

[dropcap]T[/dropcap]he third annual Low Country Fly Fishing Expo was held in Okatie (OH-kuh-tee), South Carolina at the Oldfield Club on March 28. The property is on a former rice plantation converted into living domiciles for the well heeled horse, sporting clays, golf and tennis enthusiasts. It sits on the Okatee River and provided a perfect venue for an outdoor day of getting better at fly angling – acres of mowed fields, a large gazebo, a tent and a first-class dock on a finger bay of the famous river.

You can’t learn to ride a bicycle by the telling What’s was so special about the Low Country Fly Fishing Expo? Well, it was its emphasis. The attendees were the center of attention, not the presenters. In most expos, symposiums, shows it’s the presenters who are center stage. Too, the presenters really, really knew their stuff and forked it over, willingly. It must be a southern, low country thing.

It was the most in depth one-day fly fishing gathering I’ve ever been to in over 40 years.

Aided by dozens of fellow low country guides, this year’s event organizer, Owen Plair (Bay Street Outfitters in Beaufort, South Carolina) utilized his management skills to arrange a day for large platoon of 70 plus fly angling enthusiasts to learn, relearn or refresh themselves with the very core matters of fly angling.

Included was a catered lunch that several local anglers speculated would be $20 per at any good restaurant in nearby Beaufort, SC. What southerners can do to chicken is amazing. Seconds anyone?

The real bonus for the attendees was that Plair had dozens of Low Country guides helping with the casting. Casting was notably the most popular venue. It was live action casting all day. Everyone attending got plenty of attention. No one could possibly have left unimproved or not a wiser angler.

Rank beginners, intermediate level and skilled fly anglers were aided all day long. The guides were up to any question. For example, a gal from Savannah said to one participating captain: “This may be a stupid question.” She was stopped right there. The guide said: “There’s no such thing as a stupid question, only stupid answers.”

Am I ready to fish? Were they doing things ‘bass ackward’ on purpose? Capt. Tuck Scott opened the expo with a hilarious hour and a half fly fishing ‘mini-series’, no-holds barred comments, but good natured. Mishaps by the dozen unfolded when Tuck took to the platform and ran Leroy (L) and Otis through the paces of fly fishing the flats from a skiff. Fly Life Magazine.com photo.

Capt. Scott Tuck opened the day with the entire rank & file seated on the docks retaining wall looking out on the water. In a planned scenario, two volunteer fly anglers presented themselves at the dock prepared to fish with Scott.

Tuck Scott has either worked at Comedy Central or is a protégé of Stephen Colbert. He spent an hour and a half pointing out, in a hilarious way, clients’ mistake after mistake. Errors he no doubt sees on many of his 200 days on the water. For example, the prepared to fish volunteers arrived at the dock with reel in-hand, rods still in aluminum tubes, and when asked what was the leader make-up? The “ready to fish” volunteer anglers didn’t know.

Eventually, Capt. Scott poled away from the dock and pointed out situations that flats guides key into and notice about their clients: attentiveness, casting skill level, willingness to look and see fish, casting to an actual fish with the window of time being short and ability to set the hook. Everything from feet shuffling on the deck to high sticking was observed. The volunteer anglers unfamiliarity with actually fly fishing from a boat was exposed. Nonetheless, valuable lessons were learned.

Fly fishing from a SUP Jonas and Tiffany’s Dragonfly rental SUP boards were available for free all day. Because of the windy and cold weather conditions only a few ventured out for a lesson. They’re as stable as any flats skiff of the same dimensions. Fly Life Magazine.com photo.

One somewhat unnoticed event (because it was unscheduled) was Jonas and Tiffany Stephens’ on the water SUP board presentation. While the weather was bluebird sunny and a 55 degree day, it was blowing 15- to 25 knots coming from random directions all day. It felt real cold. Only a few takers boarded their Mark Castlow built Dragonfly SUP boards.

The fact that never seems to get told is that these Dragonfly SUP boards, and only Dragonfly, are as stable as a flats boat of the same dimensions. The cooler is both a balancing aid and seat. Tiffany said you can get a Dragonfly SUP board with a sissy bar  – providing guaranteed angler stability.

Jonas and Tiffany paddled around the three football field size lagoon as if walking onshore. The only fish of the day was caught by Jonas – also unscheduled, he said.

In his third decade of teaching fly casting, Captain Dave Murray, known for good reason as the Lefty Kreh of the coastal south, introduced beginners to casting a fly line. He energetically aided intermediate and skilled anglers in finding their rhythm; feeling the line load the rod and getting them to stop breaking their wrists.

Everyone was coached to perform better; get more distance and improve their accuracy. The typical mistakes by attendees were hula hooping (as if swinging a bat), not letting the rod work (muscling) and wrist issues (over hinging). Tony Royal has owned Bay Street Outfitters in Beaufort, SC for over 19 years. Here, he goes over in great detail the how and why of choosing and rigging equipment. He covered the subject thoroughly. No detail is too small Tony says. Fly Life Magazine photo.

Along with the new Savannah based outdoor clothier Flood Tide, were Orvis and Sage. The latter two brought plenty of ammo, including their newest rods and reels. It was great opportunity to test drive what we all just read about.

After 30 years in the salt (South Florida) and a new coordinate, Atlanta, I was trout rod challenged. With a good idea of what I wanted, I tested a few rod and reel combos that were advertised to perform to my liking, and were in my price range. With help of Orvis rep Ben Austin I reached a decision.

Although Orvis describes it’s new Recon 5-weight, 9-foot trout rod as a mid-flex action rod. To me, it seemed softer than described, but likeable because it didn’t have that recovery twang on longer casts.

The day ended with happy faces all ’round with promised get togethers of new found friends along with fond farewells. No one turned down the lunch. It was almost worth the price of admission. Fly Life Magazine.com photo. Capt. Owen Plair, expo organizer, goes over the fine points of HOW TO fish the low country. Local anglers flocked to his presentation, which was also video enhanced. Fly Life Magazine.com photo.