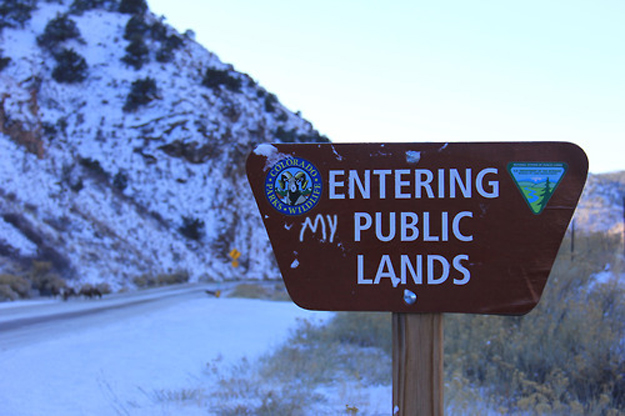 A business man looks at what GOP theft will cost us If this was heading for Bristol Bay, how would you feel Lisa Murkowski?

Op-Ed If America’s public lands were a business, the GOP would be bungling the balance sheet

[dropcap]A[/dropcap]merican politicians have always been obsessed with running government “like a business.” They promise to make bureaucracies leaner and let the free market fix all our problems.

Well, if America’s public lands were a business, shareholders would be shocked by the gross negligence of some of their top executives

But we’ve let the fossil fuel industry into the boardroom. We’re allowing gas and mining companies to boss around our elected officials How would you feel if the Russians had the mining rights to this?

Rather than harness the power of public lands for maximum benefit, some politicians on the right — including Utah Gov. Gary Herbert, Maine Gov. Paul LePage and Sen. Lisa Murkowski (R-Alaska) — are trying to repeal laws that safeguard ecologically vulnerable landscapes. They’re working to roll back protections on some of our most special wild places, including Bears Ears National Monument in Utah, the Arctic National Wildlife Refuge and the Katahdin Woods and Waters National Monument in my home state of Maine. And they are pushing to transfer ownership of federal lands to states.
What right do the states have to assert control over land owned by every American citizen?

They cloak all this in an argument for states’ rights, but that’s baloney. What right do the states have to assert control over land owned by every American citizen? Selling public lands has been item No. 1 on Big Oil’s agenda for a long time. It’s a theft of valuable property owned by all of us

Public lands already get used for drilling and mining and grazing and other kinds of development, which makes good sense. But some places are simply too exceptional to put at risk. That’s why both political parties have long placed trust in our federal agencies to make appropriate decisions about the best use for our lands. It’s not a perfect system, but it works pretty well.

These agencies, such as the Bureau of Land Management and the National Park Service, take into account the input of citizens, along with scientific and economic data, to provide a wide range of benefits from public lands.

It’s outrageous that politicians would take away this oversight. But just as bad, these supposedly business-minded politicians can’t read a simple balance sheet

No, they’ll use robots Will Exxon own this.

Some argue that oil and gas jobs would multiply if more lands were opened for development, but in reality, those jobs are being replaced by robots. Because of automation, between a third and a half of the workers who lost their jobs after prices fell a few years ago still can’t find work, even as prices and production surge again. Those jobs have largely moved on to new industries, such as renewable energy. (Would you believe it?)

You can’t outsource the jobs of workers operating a roadside motel near a national park or automate the job of a local river guide in one of rural America’s many wilderness gateway towns. Public lands power a sustainable, homegrown economy. From 2008 to 2011, during the height of the recession, the outdoor industry grew 5% every year

Areas in the West with protected lands consistently enjoy better rates of employment and income growth compared to those with no protected lands, a recent study shows. In the 22 years since the Grand Staircase-Escalante in Utah was declared a national monument, jobs grew by 38% in two neighboring counties.

Some lawmakers are acting far outside the interests of the public land owners they were elected to serve. In the corporate world, we’d show them the door immediately. Of course, that’s not how our government actually works.

We need to work together to protect our public lands. We all value access to wild places where our air, water and wildlife are safe from pollution and development. We all benefit from the enormous economy generated by the conservation of our lands. And we all hate getting ripped off by hucksters posing as smart businesspeople, threatening not just our economy but our American heritage as well.

Let’s drop the discord, start acting like owners and demand that our elected representatives start delivering the value we deserve

For links and images in complete story […]

Yvon Chouinard is the founder of Patagonia […]