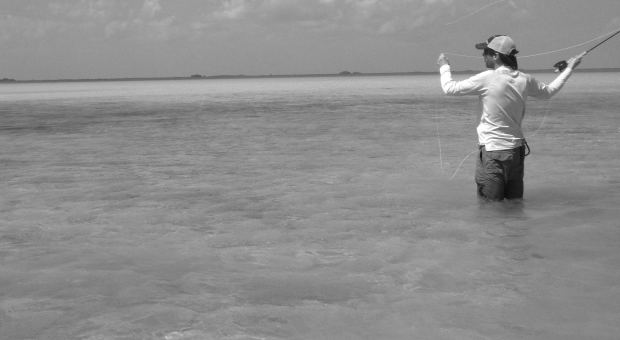 A cerebral approach to fly fishing

Hold on, you can succeed at catching before the casting gods grant you passage

[dropcap]S[/dropcap]tatistically, fly casting is so perplexing that schooled anglers of the bait and metal brotherhood, trying to convert, fail at a rate exceeding 80%,  according to the ASA survey several years ago.

Women, it was pointed out, are twice as likely to succeed as men. It’s reported that they endeavor to listen to instruction.

I learned to become a good predator before a good caster. All it took was the patience of a mentor, Tad Potter of Pittsburgh, Pennsylvania, a willingness on my part to listen, and buying about $5 worth of hardware store items. The latter, a thermometer and a piece of mosquito screening. I had some scrap 2 X 2s and a staple gun.

An elaborate version of a stream thermometer. A Fishpond image.

The water temperature, freshwater (coldwater) and saltwater, plays a game changer role in just how bugs and baits, and the pescados that prey on them, go about their business of fornicating and eating – two of their three favorite things – evacuating processed nutrition the other. So, knowing vital temperature parameters provides a window opened.

Assessing the situation calls for patience

1. Knowing what is predominantly available as a food source in a stream at specific water temperatures and seasons could catch you a trout, but if you take one more measurement, you probably will catch a trout.

2. Knowing just exactly what the makeup of aquatic life is in the water is another piece of the “cerebral” puzzle. There is only one way to be sure just what the aquatic life composition is in that freshwater body of “coldwater” you intend to fly fish.

3. That mosquito screen that you bought and built into a seine is your ticket to success. The seine is a square, small box held together by those 2 X 2s. To use it, just stick it in the water on top of your wade boots and shuffle forward. What you kick up and trap in the seine is what’s for dinner – voilà! Now, as they say, match the hatch

4. There is not always the coincidence of the stream you just fished having the same variables holding in a stream only a dozen miles away.

5. Bug hatches could be timed differently or just be different altogether, and so on. The water CFM could have changed, the temperature separate, and the aquatic life lopsided one way or just different. Recommendation: A good way to come up tight

Get up close and personal with a local fly shop. Then, through them, hire a guide for these reasons:

They’ll school you in fly casting, aquatic life, where the fish hold, choose the flies you need, teach you about knots, stream conservation, how to fight a fish, how to release a fish, and most importantly, how to fly fish.

Yes, book her or him again. It’s the best, and fastest road to a degree in “flyfishology.”

Featured Image by A. Derr – www.longislandonthefly.com