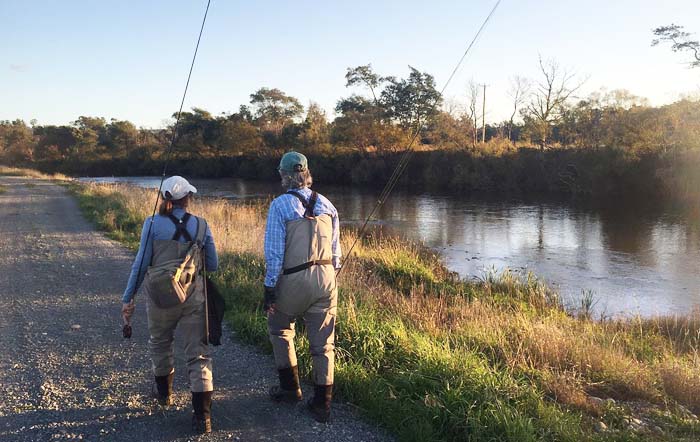 I just love this fly. It’s easy to tie, I have all the materials, and it’s been successful for 170 years

[dropcap]A[/dropcap]ccording to Tim Flagler [Tightline Productions], Wikipedia, Martin Joergensen [Global Flyfisher], Catherine Comar’s book A Graceful Rise: Women in Fly Fishing Yesterday, Today, and Tomorrow and a random selection of a few blogs, the Red Tag fly, which I was about to write was a copy of a Royal Wulff and Adams, is an ancient classic.

The fly was born in the 1850s and attributed to Martyn Flynn from Worcestershire, England – tied as a dry fly and meant for grayling in the North Country of England

For the benefit of history buffs, the original name was The Worcestershire Gem, but few people refer to it as anything else than the Red Tag these days. A very suitable name since the predominant red tail or tag is one of the main traits of the fly. As a fly of the 1850s and earlier, beginning with Dame Juliana Berners, A Treatyse of Fysshynge wyth an Angle [1496 – first known book on flies and fly fishing in England] tying was done with simplicity, few cheap and common materials and all-natural.

At some point, the fly migrated to Australia’s Tasmania where it became famous for attracting takes by brown trout and remains a fly box must today. Currently, the fly is tied with a body of peacock herl, a tail of red or crimson Antron yarn, and a red cock’s hackle for a collar [actual color of hackle is reddish brown]. The hackle can be hen’s hackle for wet fly versions. Hook sizes vary from #16 through #10. Ribbing was added later and served as an anchor for the Antron.

Martin Joergensen, Global Flyfisher, says the fly palmered [Red Palmer] is a go-to fly for saltwater and especially picky sea trout in calm, clear water. His tying is similar to that shown in Flagler’s video but decidedly beefier.

In Flagler’s version the recipe for the Red Tag Wet Fly is:

The big question is, does the Red Tag Wet Fly catch fish? I’d never leave home without a half dozen. I doubt it’s going to start failing now.