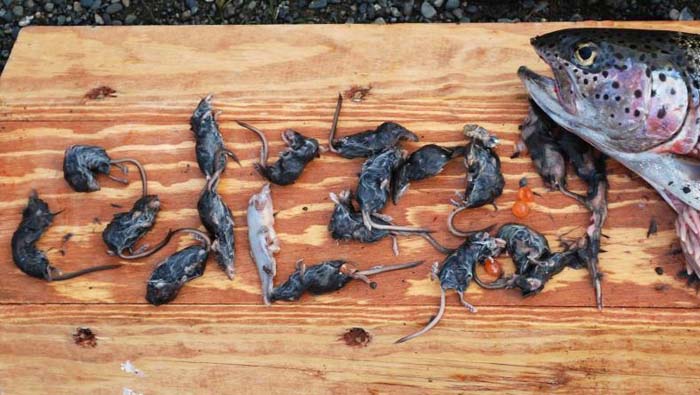 Alaska and voles – mousing your way to victory

[dropcap]M[/dropcap]y friend Angie Roth and her sister Carol are off soon to LA for a conference on human trafficking followed by a week in Alaska hoping for a shot at silvers, but in late July not likely.

Carol, not being a lawyer, more rational than her sister lawyer so I convinced her to take a couple of dozen egg patterns that will be attracting trouts in salmon rivers, and the ever useful vole pattern – mouse. Maybe the most fun way to catch Alaskan trout.

The egg patterns were, of course, easy, but the voles a little more interesting to tie. Here’s what I know about voles:

1. Use tube flies so you can use smaller size #6 or #8 narrow gap barbless hooks. Less damage to the fish and better hook up stats.

2. Be a blustery caster – plop that vole with a grand splash. Pitch near structure and pop it from shore. A short 6-foot tippet is all you need and 16-to 20-pound test.

3. Make sure the erratic and noisy retrieve keeps the vole fly upright, a rolling upside down mouse is not natural. In trout world, unnatural is a threat.

4. Setting the hook is not as easy as it first seems – given the types of strikes. It’s the toughest test because trout will both pounce and sip. My favorite way is like when tarpon fishing, let the animal eat. No high sticking, side setting, just handset straight – but make it eat.

5. You’ll do better in shallow water.

6. If the mouse misses, put it right back where it was.

7. Pay attention to your guide.