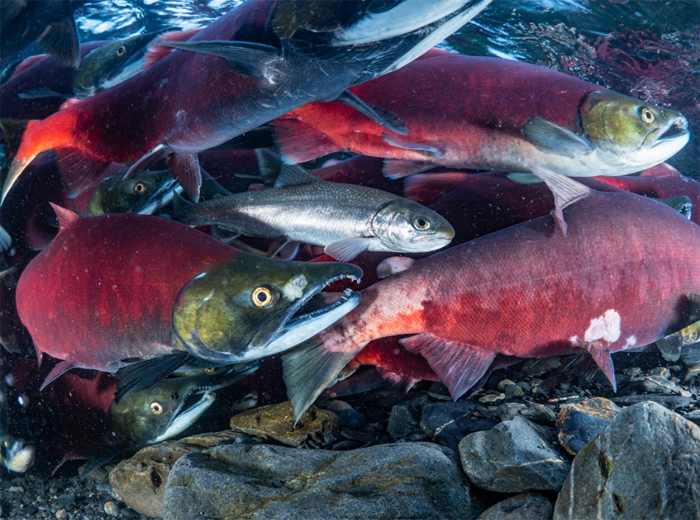 The Japanese investment firm, DOWA, must do the responsible thing and back out of a mining project that could decimate native salmon. Sockeye salmon, Chilkat River, Alaska. Photo provided with permission courtesy of American Rivers – photographer Connor Gallagher.

America’s Most Endangered Rivers of 2019

From water scarcity on New Mexico’s Gila River, named the #1 Most Endangered River in the country, to sea-level rise on the Hudson and flooding on the Upper Mississippi, America’s Most Endangered Rivers of 2019 illustrates what’s at stake and the choices facing communities.

“Climate change is striking rivers and water supplies first and hardest,” said Bob Irvin, President and CEO of American Rivers. “America’s Most Endangered Rivers is a call to action. We must speak up and take action, because climate change will profoundly impact every river and community in our country. Healthy rivers are our best defense against droughts, floods and the impacts of a changing climate.”

Climate change is the most consequential environmental challenge facing our planet. In the U.S., cities are struggling to do more with less water, fish and wildlife are struggling to survive, forest fires are growing more destructive and storms are triggering more life-threatening floods. In March, record flooding across the Midwest killed at least four people and cost more than $3 billion in property damages in Nebraska and Iowa. The harshest impacts of climate change are often most prevalent in communities of color and economically disadvantaged communities. 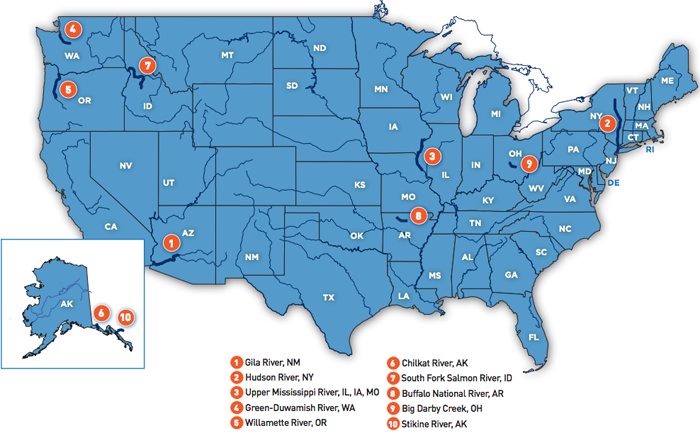 The National Climate Assessment released in 2018 states, “Water quality and water supply reliability are jeopardized by climate change in a variety of ways that affect ecosystems and livelihoods…Very heavy precipitation events have increased nationally and are projected to increase in all regions. The length of dry spells is projected to increase in most areas, especially the southern and northwestern portions of the contiguous United States.”

The top three rivers in America’s Most Endangered Rivers of 2019 demonstrate how climate change is already having an impact, and how our actions will either weaken or strengthen river communities:

#1 Gila River –The Southwest is becoming hotter and drier due to climate change. Building a costly new diversion and compromising river health doesn’t make sense when there are cheaper, more effective water supply alternatives for the region.

“Our nation is at a crossroads. If we continue to degrade and abuse our rivers, we will compromise our ability to deal with increasingly severe droughts and floods. But if we protect and restore our rivers in thoughtful and equitable ways that do not perpetuate the mistakes of the past, we can strengthen our communities and create a more secure future,” Irvin said.

“We are committed to spotlighting threats and working with communities on solutions that benefit people and rivers. We believe everyone in our country deserves clean water and a healthy river.”

In addition to announcing the nation’s ten endangered rivers, American Rivers honored Ohio’s Cuyahoga River as “River of the Year.” The title spotlights the river as a national success story and celebrates the progress Cleveland has made in cleaning up the Cuyahoga, fifty years since the river’s famous fire that sparked the nation’s environmental movement.

“Fifty years ago, the Cuyahoga River was so polluted it caught fire. In this anniversary year, we celebrate the progress that has been made in Cleveland, and we underscore the importance of clean, healthy rivers to cities nationwide,” said Irvin. “May other cities draw inspiration from Cleveland’s story, and may we all work together to spark an urban river renaissance nationwide. Because everyone in our country deserves clean water and a healthy river.”

In its 34th year, the annual America’s Most Endangered Rivers® report is a list of rivers at a crossroads, where key decisions in the coming months will determine the rivers’ fates. Rivers are chosen for the list based on the following criteria: 1) The magnitude of the threat, 2) The significance of the river to people and nature and 3) A critical decision-point in the coming year. Over the years, the report has helped spur many successes including the removal of outdated dams and the prevention of harmful development and pollution.

AMERICA’S MOST ENDANGERED RIVERS® OF 2019

Gov. Grisham must choose a healthier, more cost-effective way to provide water to agriculture than by drying up the state’s last major free-flowing river.

The U.S. Army Corps of Engineers must consider effective, nature-based alternatives to storm-surge barriers that would choke off this biologically rich tidal estuary.

Local leaders must produce a flood protection plan that safeguards communities and restores habitat for chinook salmon — fish that are essential to the diet of Puget Sound’s endangered orca whales.

The U.S. Army Corps of Engineers must immediately improve 13 dams to save wild chinook salmon and steelhead from going extinct.

The Japanese investment firm, DOWA, must do the responsible thing and back out of a mining project that could decimate native salmon.

The U.S. Forest Service must safeguard endangered fish by denying a mining proposal that could pollute this tributary of the Wild and Scenic Salmon River.

Local leaders must use state-of-the-art science to craft a responsible development plan that protects this pristine stream.

The International Joint Commission of the United States and Canada must protect the river’s clean water, fish and wildlife, and indigenous communities by stopping harmful, polluting mines.

American Rivers believes every community in our country should have clean water and a healthy river. Since 1973, we have been protecting wild rivers, restoring damaged rivers and conserving clean water for people and nature. With headquarters in Washington, D.C., and offices across the country, we are the most effective river conservation organization in the United States, delivering solutions that will last for generations to come. Find your connections at AmericanRivers.