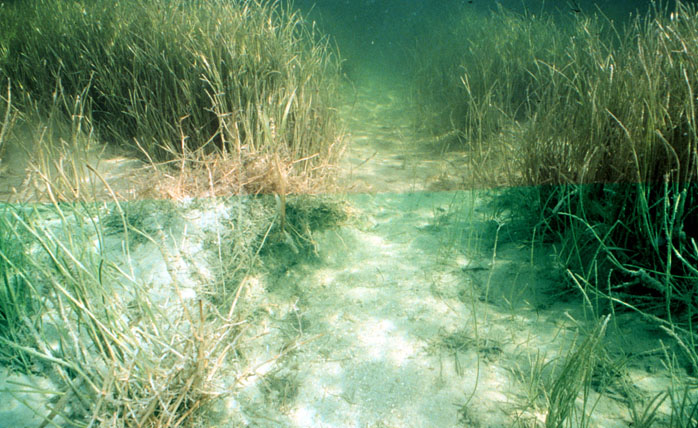 A prop dredge-damaged seagrass bed will take 7 to 10 years to regenerate. Sediment plume is as harmful to seagrasses as prop dredging itself because it can also cut roots (rhizomes) that anchor as deep as 5-feet. Dredged seagrass paths are a sure sign of abysmally ignorant boaters, who have raped everyone’s fishing future. Seagrasses are disappearing from the Florida keys at an unacceptable rate. The Florida Keys guides say that the acres and acres of propeller and plume damage to seagrasses are almost always caused by, with no malice intended, casual boaters, jet-ski operators. Nearly all personal watercraft operators and novice sports fishers with boats are both impatient and unfamiliar with where they are, what they are getting into, or doing. Photo Florida Keys National Marine Sanctuary / Harold Hudson.

Recovery: Prairies Under the Sea [dropcap]S[/dropcap]eagrasses, more closely related to lilies than true grasses, are distributed across Earth’s salty and brackish shallows from tropics to Arctic. There are 72 known species in four major groups.

Thick roots and rhizomes anchor these flowering plants against currents while simultaneously stabilizing sediments and shorelines.

Seagrass prairies improve and protect water quality, support complex food webs, and sequester more atmospheric carbon per acre and for longer than terrestrial forests. They’re being destroyed, mostly by human activity, at the rate of one football field every 30 minutes.

In the early 1930s eelgrass, a temperate species, took a huge hit throughout the North Atlantic from what was presumably a non-human cause — wasting disease.

If significant eelgrass survived in Virginia’s coastal bays in 1933, a hurricane and bay scallop dredges likely did it in. Lush eelgrass prairies were suddenly replaced with shifting sands that blocked sunlight, filled in navigation channels and smothered oyster reefs.

Also dependent on eelgrass and declining with it were speckled trout, red drum, flounder, striped bass, American brant and bay scallops, all of which had pumped money into local economies. One gastropod, the eelgrass limpet, even went extinct.

By 1930 Virginia was harvesting more bay scallops than any other state, but two years later the fishery collapsed, and it hasn’t resumed.

“As kids we picked up bay-scallop shells on the beach and didn’t know what a live version looked like,” says Bo Lusk, Coastal Scientist for The Nature Conservancy’s 40,000-acre Virginia Coast Reserve, longest expanse of coastal wilderness in the East. “Chesapeake Bay was where the eelgrass was; you never expected it on the sea side.”

Investing in Seagrass Can Yield Big Returns, But It Requires Patience

Seaweed Farming: A Gateway to Conservation and Empowerment

Ted Williams detests baseball, but is as obsessed with fishing as was the “real” (or, as he much prefers, “late”) Ted Williams. What he finds really discouraging is when readers meet him in person and still think he’s the frozen ballplayer. The surviving Ted writes full time on fish and wildlife issues. In addition to freelancing for national publications, he serves as national chair of the Native Fish Coalition.