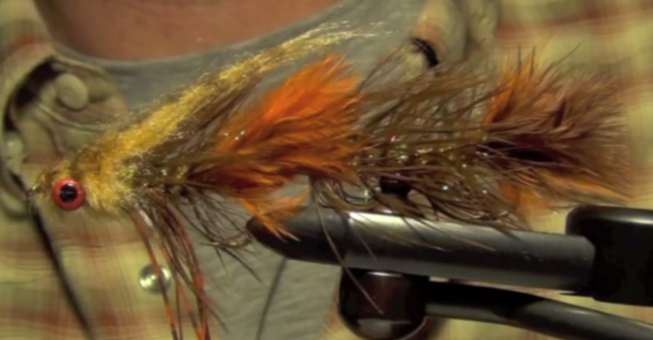 At The Vise: Articulated Gonga Streamer

[dropcap]W[/dropcap]e did not fish this fly but have no reason to doubt its reported support since we have two separate blow by blows of its success. One, a report from North Georgia (rainbow trout and largemouth bass) and a friend/tyer from Idaho who reported her successes on the famed Silver Creek (browns) and from her lawn on the Wood River (large rainbows). Each had modified the Gonga by color choices of the marabou, pseudo hair but not the ice dubbing. No comments on hook choices, bead colors or wire. Georgia preferring lighter and Idaho darker flies.

NOTE 1: This fly is very similar to several versions of the articulated Woolly Bugger.

NOTE 2: To keep the rear fly/hook out of the way of the forward fly/head, attach a rubber band to the rear hook, the first tie, and anchor to your vice. Viola, never in the way and no self-impaling possible.

Note 3: Articulated flies are a bear to carry, they need to be hauled around in a special fly box that can accommodate their lengths as well as dual or multiple hooks.