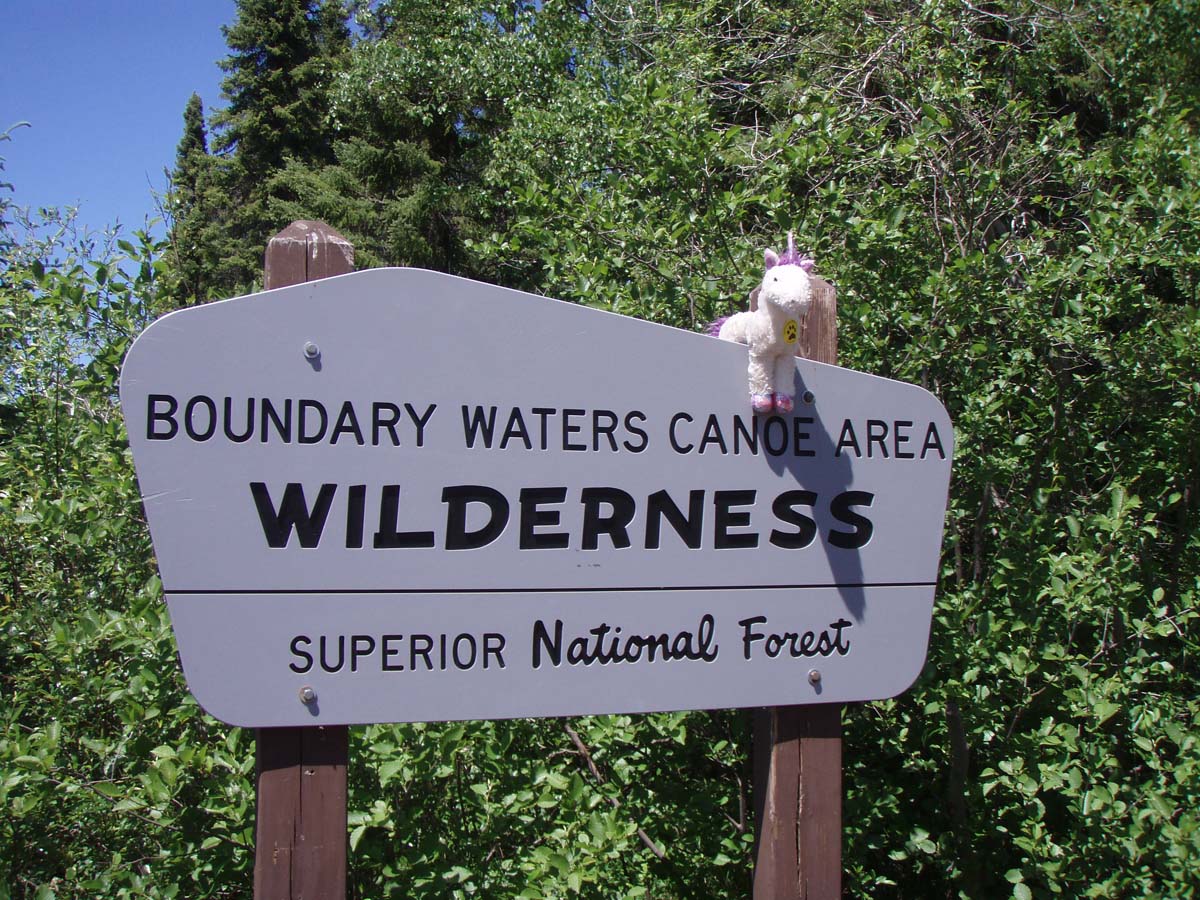 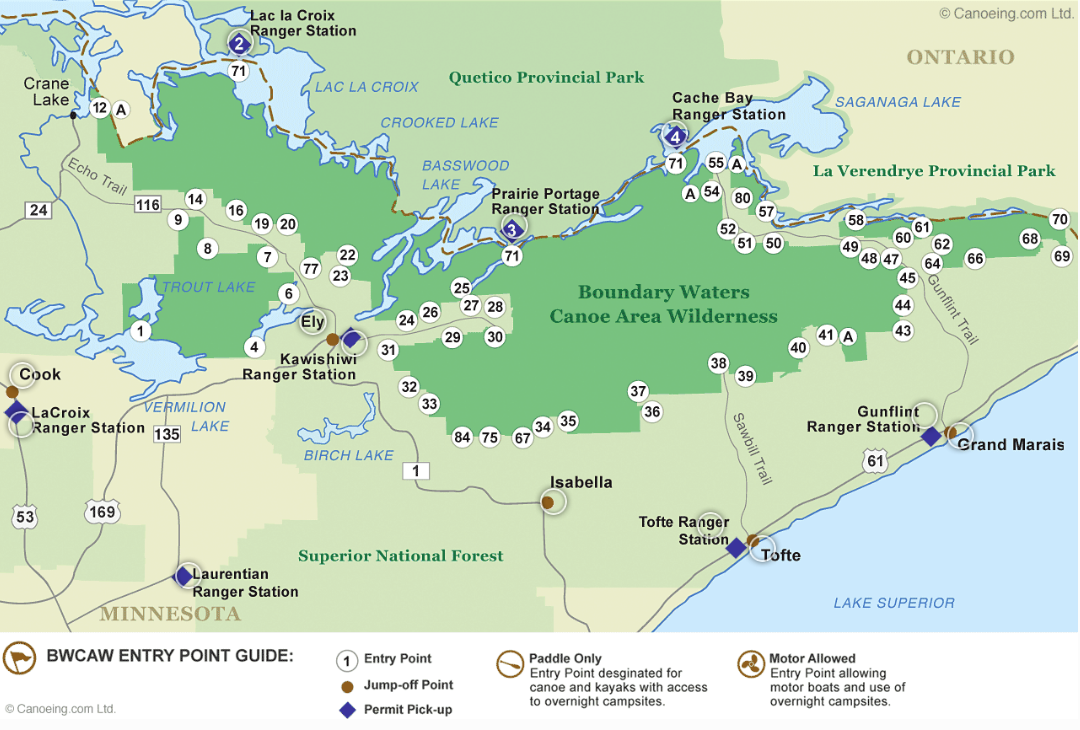 Permits are required year-round for all visitors to the Boundary Waters Canoe Area Wilderness. Overnight permits are issued on a quota system which regulates how many groups can begin a trip at each entry point, each day. Map illustration credit Canoeing.com.

The leases, reinstated during the Trump years, would have allowed a Chilean mining conglomerate to dig for copper and nickel near the Boundary Waters wilderness in Minnesota.

The Biden administration said Wednesday that it had canceled two mining leases that would have allowed a copper mine to be built near an area of pristine wilderness in Minnesota.

The Interior Department said it had determined that the leases, held by Twin Metals Minnesota, a subsidiary of the Chilean mining conglomerate Antofagasta, were improperly reinstated by the Trump administration in 2019.

President Obama had previously moved to block the mining project, declining to renew the leases. But beginning in the early weeks of the Trump presidency, the administration worked at high levels to remove roadblocks to the mine. [NYTIMES reported in 2019]

That move followed discussions between Antofagasta executives and senior administration officials. The billionaire Andrónico Luksic, whose family controls Antofagasta, also rented a $5.5 million house in Washington to Ivanka Trump, the daughter of former president Donald J. Trump, and her husband, Jared Kushner, early in the Trump administration when the couple was first moving to Washington, D.C. 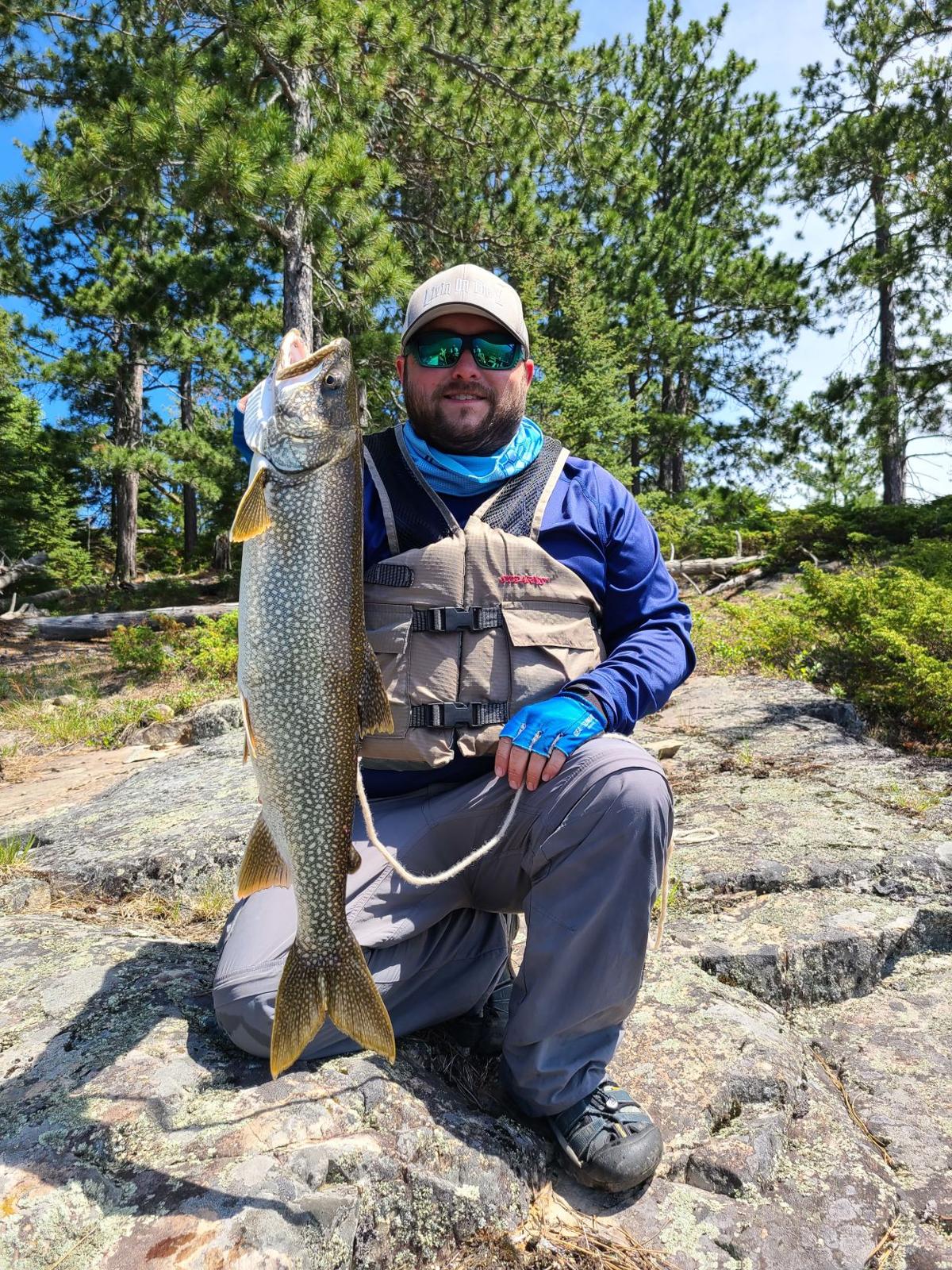 Avid anglers know Boundary Waters Canoe Area Wilderness as a phenomenal place for fishing. Without any development or human interruption on lakeshores or in watersheds, wilderness has complete ecosystem functionality. Fish have fully intact spawning, rearing and foraging habitats — all those necessary elements to thrive. On developed lakes, those habitats slowly disappear, the marginal culmination of each successive change, often deleterious, to lakeshores and their watersheds. Photo credit The Free Press.

WASHINGTON — Today the Department of the Interior canceled two hardrock mineral leases adjacent to the Boundary Waters Canoe Area Wilderness in northeastern Minnesota. The action comes after the Department’s legal determination that the leases, held by Twin Metals Minnesota, were improperly renewed by the Department in 2019.

“The Department of the Interior takes seriously our obligations to steward public lands and waters on behalf of all Americans. We must be consistent in how we apply lease terms to ensure that no lessee receives special treatment,” said Secretary Deb Haaland.

“After a careful legal review, we found the leases were improperly renewed in violation of applicable statutes and regulations, and we are taking action to cancel them.” — Secretary Deb Haaland

A new legal opinion from the Interior Department’s Office of Solicitor found significant legal deficiencies in the circumstances surrounding the 2019 renewal, including: the lease renewal forms contravened the Department’s regulations; the Department did not duly recognize the U.S. Forest Service’s consent authority; and the inadequate environmental analysis failed to include a no-renewal, no-action alternative. Subsequently, the Interior Department has canceled the two leases.

NOTE: No mineral production has occurred on either lease since the original date of issuance in 1966.

The Interior Department’s Bureau of Land Management (BLM) manages the mineral deposits located in the Superior National Forest. As the surface management agency, the Agriculture Department’s U.S. Forest Service issued a decision withholding consent to the renewal of two mineral leases in 2016, citing the risk of environmental contamination of the surrounding watershed as a key concern. Subsequently, the BLM rejected the renewal application submitted by Twin Metals Minnesota. Based on a now-withdrawn legal opinion, the Interior Department improperly renewed the expired leases and granted their renewal in 2019.

Separately, the Biden administration is considering actions to protect the Boundary Waters and surrounding watershed. The BLM and Forest Service are reviewing public comments and conducting Tribal consultation in relation to a proposed withdrawal of key portions of the national forest lands from disposition under the mineral and geothermal leasing laws. While the review is underway, the BLM has initiated a two-year segregation that will prohibit the issuance of new federal mineral leases within 225,378 acres within the Rainy River Watershed.

The science-based environmental analysis will evaluate the potential impacts of the mineral withdrawal on the important natural and cultural resources in the area. The Secretary of the Interior has the authority to withdraw lands for a maximum of 20 years, subject to renewal; only Congress can legislate a permanent withdrawal.

The Boundary Waters is the most visited wilderness area in America and the only lake-land wilderness in the National Wilderness Preservation System. It boasts more than 1,200 miles of canoe routes and 2,000 designated campsites within its million-acres of lakes and forests that extend along the border with Canada and adjacent to Voyageurs National Park. Congress expanded protections for the wilderness area in 1978, when it directed the Forest Service to maintain high water quality and to minimize “to the maximum extent possible” the environmental impacts associated with mineral development.

Responsible development of domestic mineral supplies is important to transitioning to a clean energy economy. The study and two-year segregation from new mineral leasing will give USDA and DOI the opportunity to fully support science-based decision-making in the Rainy River watershed.