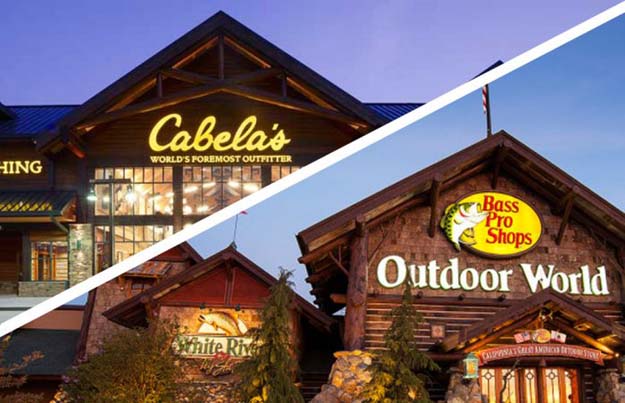 Bass Pro Shops image. The effect on fly fishing purchases will be minuscule as neither entity has the staffing or product that mirrors fly anglers’ needs. However, during the merger startup, closures, and inventory sell-offs, folks looking for a deal will find it.

[dropcap]T[/dropcap]he merger of Bass Pro Shops and Cabela’s (CAB) has received the go-ahead from antitrust regulators.

In a filing with the SEC, Cabela’s said Wednesday the Federal Trade Commission informed the company earlier this week that it concluded its investigation of Bass Pro’s $4.2 billion buyout. Cabela’s shareholders will vote on the deal July 11.

The transaction, which is expected to close during the third quarter, is also contingent on the successful sale of Cabela’s financial unit to Synovus Financial (SNV), a bank based in Georgia, and Capital One Financial (COF).

Bass Pro and Cabela’s initially agreed to a deal worth roughly $5.5 billion, but the outdoor retailers amended the merger after Capital One ran into regulatory hurdles over its plans to buy all of World’s Foremost Bank, a Cabela’s subsidiary.

Cabela’s agreed in April to be bought for $61.50 a share, down from the original purchase price of $65.50 a share. Under the new plan, Capital One will buy Cabela’s credit card business. Synovus will acquire the assets and deposits of World’s Foremost Bank.