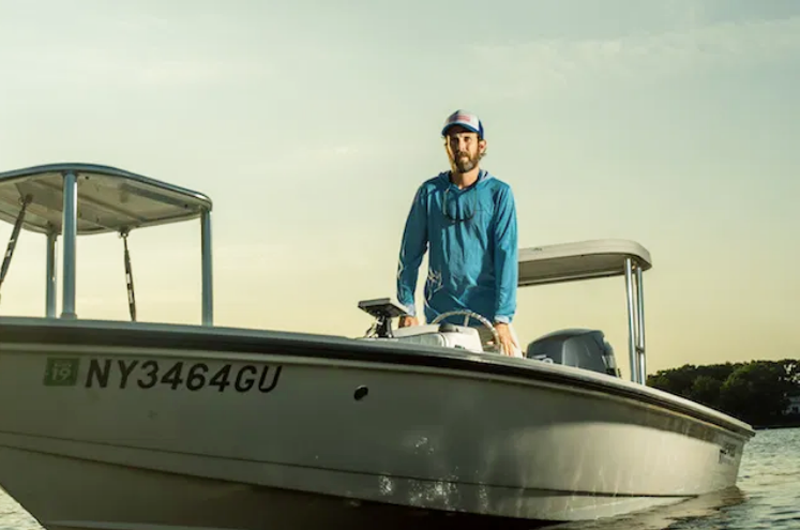 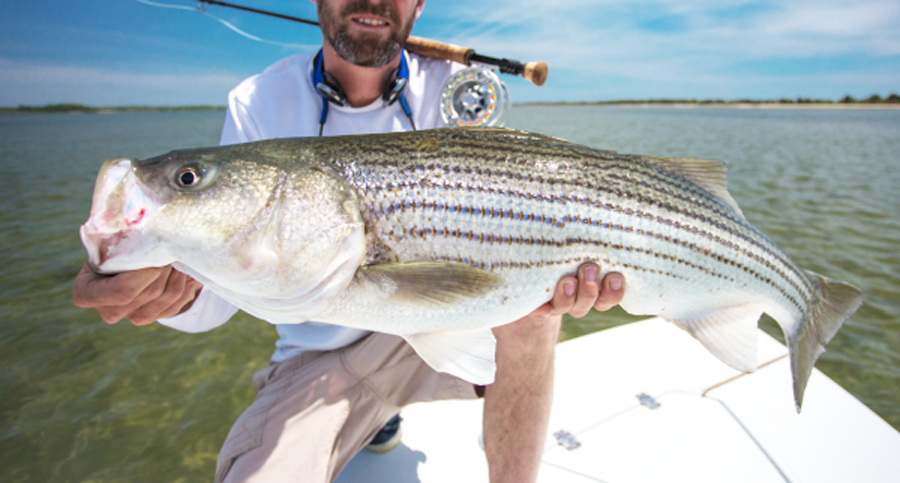 The stripers are back, and sight casting is what it’s all about

There is no more challenging or rewarding way to catch a striped bass than to do so on the flats in shallow clear water. Just watching these fish move through the water with a bright sun above them is worth the price of admission alone. In May and June, these fish stop into Peconic Bay and Gardiner’s Bay (among others) to fill up on chow after their long migration up from the Carolina’s or somewhere thereabouts.

Peconic Bay’s perfect early season temps bring in many stripers anywhere from 5-40-pounds. We miss many ’40s but to see fish in the high twenties  and the thirties is not uncommon. Getting a shot at a sight-fished bass in the 20-pound range is unnerving, to say the least, and will not be quickly forgotten. Some years are better for the big fish than others, but the possibility of casting to a knee-shakingly big fish is genuine at this time of year. 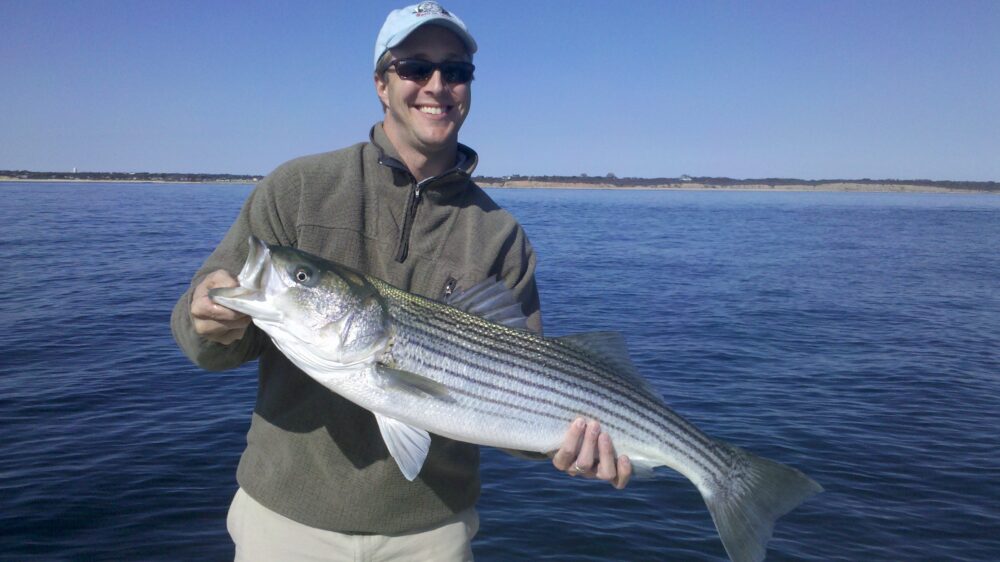 In the Spring, count on these fish coming into the bays and eating a whole lot of sand eels before heading out to deeper water further to the east after the summer’s sun gets beating down in mid-July

My absolute favorite season is soon upon us. Flats fishing for stripers on Long Island during May and June is really the culmination of all of my favorite components of this sport. The fact that this season comes after a somewhat dogged winter makes it even sweeter but the true pleasure is derived from seeing these beautiful creatures in 2-feet of often gin clear saltwater. It is pure sight fishing for striped bass which alone is enough to keep me coming back. But perhaps the coolest component of this sub-sport is the chance to cast to, fish to, and hopefully fight a truly big striped bass in very shallow water. Every body movement is seemingly magnified, from the fish’ approach to the flat, it’s approach to the fly, the take, the head shake and the run. It’s all better in clear and shallow water. And when you are not casting to a fish, you are scanning and searching for them with one of the most beautiful backdrops imaginable. All of this is two hours from JFK Airport.

Stripers eat plenty of different baits in Peconic and Gardiner’s but be sure to be well supplied with sand eel patterns if you make your way. Other important foods for these fish include bunker early in the season and shrimps, crabs, and cinder worms as the water warms in mid-June.

Generally, the action starts to the west and slowly moves to the east as the bay temps warm with the progressing season means we are never fishing the same waters for too long, which is hugely entertaining. Also, the range of different forage species provides a lot of variation in the flies we tie and fish. The presentation of the sand eel is quite different from that of the mole crab, so variety is a big part of the fishing scenario. Bright days are better for sighting fish on the flats, but we have had many bang-up days fishing in overcast conditions when the season is full swing, and the bass numbers are high.

North Fork and the Hamptons are a few miles apart, but decidedly different planets

While the North Fork and the Hamptons have a decidedly different vibe, both have a multitude of dining options and an array of comfortable accommodations. A long weekend on either is a great way to break up the summer and allows for fishing on a weekday which always produces less boat traffic and sometimes happier fish. Another big bonus is that this area gets extremely busy after the flats fishing has peaked, so the summer crowds that the Hampton’s are famous for have yet to swell to unbearable proportions. 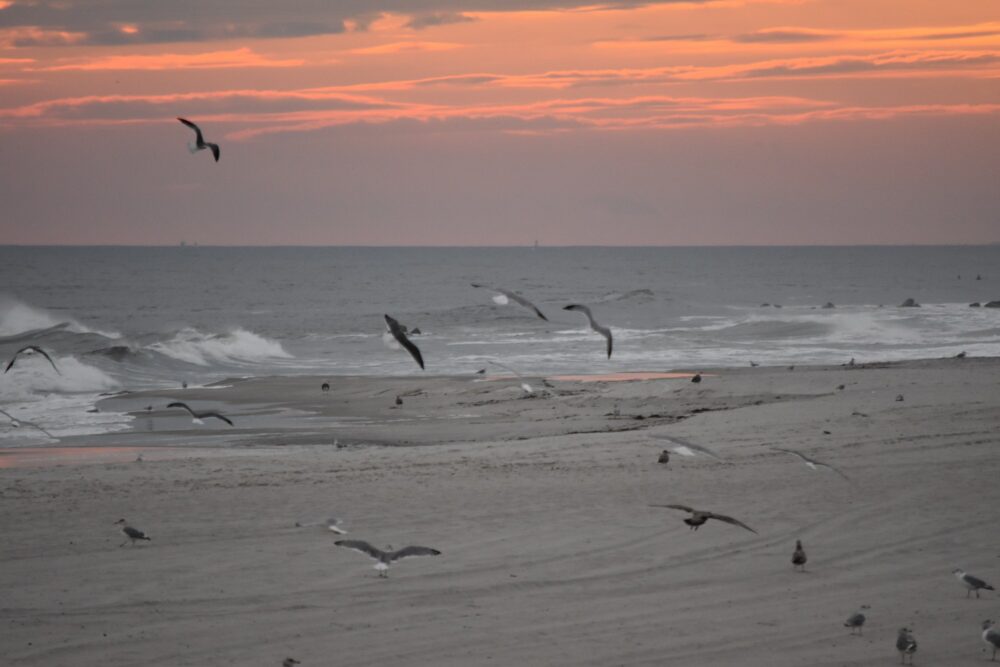 The Hampton’s where the Atlantic Ocean meets seagulls gliding on the wind and dodging the surf and waves during a glorious sunset.

While Richard Strolis is better known for his freshwater flies, we found this simple sand eel recipe to be effective and quick to tie. As each Spring rolls around in the Northeast and we get ready for stripers on the flats, I scramble to tie up as many sand eels as possible. We are happy to have Richard’s work here at FLM and will be featuring more of it in the coming months. Or you may go check out his website.