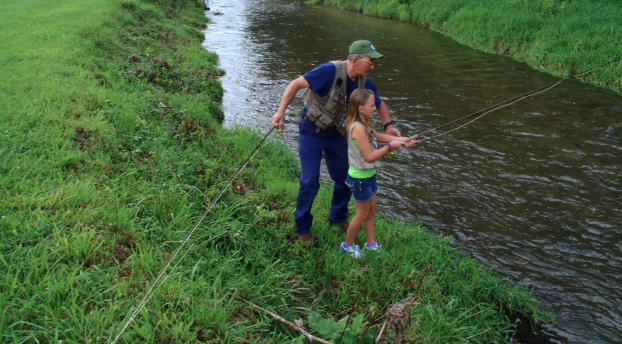 Click on image to visit Thom Glace’s website. Thom’s watercolor of the Eastern Brook Trout is the subject of Jimmy Jacobs’ new book.

Who is Jimmy Jacobs:

dropcap]J[/dropcap]immy Jacobs is a native of Atlanta and now resides in Marietta, Georgia. Since 2012 he has been the Georgia Editor for Southern Trout Magazine online.

For 25 years he was an editor for Game & Fish Magazines covering the states of Alabama, Florida, Georgia, Kentucky, Louisiana, Mississippi, Tennessee and West Virginia. In that capacity, he has written extensively about the region from the Southern Appalachian Mountains to the Atlantic and Gulf Coasts.

He was the Outdoor Columnist in the Sports Section of the Atlanta Journal-Constitution newspaper from 2008 to 2016 and also in the Athens Banner-Herald in 2016.

He also is the author of award-winning guidebooks to fishing and hiking in the southeast region, as well as a volume of Southern humor and nostalgia, plus an adventure novel.

His new book, Brook Trout in Dixie: Jewels of the Southern Appalachians, is out and you can get a signed copy (in person) this weekend in Atlanta, GA. It is more than fitting that Jacobs be the first to devote a book to Dixie’s little-speckled trout. He has been fishing the Southern Appalachian Mountains for more than four decades. He is also the author of Trout Fishing in North Georgia, Trout Streams of Southern Appalachia, and Tailwater Trout in the South. Another of Jacob’s venture of late is being the editor of Southern Saltwater Fishing Fishing Magazine that premiers in a few weeks.

This is a great, five-star book that has already pushed aside another book on the top shelf of my southern trout and fly fishing book shelf. If you have any passion whatsoever for the brook trout of the Southern Appalachians, this is a must have/must read title.

Autographed copies of Brook Trout in Dixie: Jewels of the Southern Appalachians are available directly from the author at his online bookstore.