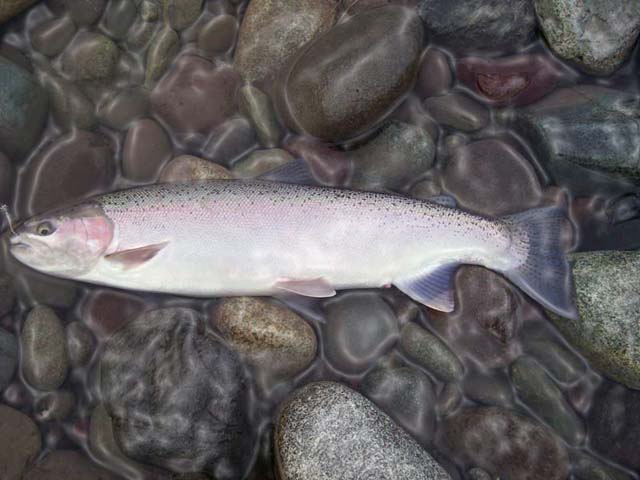 Book Review: Put some ‘Steel’ in your library

[dropcap]S[/dropcap]teelhead, you say? Now there’s a fish that has garnered more writ—if judged on the basis of “grabs,” or strikes per angler-hour — than any other I know of.  So what’s all the fuss about? Read Sean Gallagher’s “Wild Steelhead” (Wild River Press, 2013) and you’ll discover why, which the way he tells it, includes several factors: Let’s start with the difficulty inherent in landing a steelhead, along with the tradition and culture that surrounds these sylphs—one that defines a lifestyle and a place in the wilderness: rain gear, untamed rivers and old-growth forests. The author and his friends, who join in the narrative, have all embraced its green totality. Then, the development of flies and techniques—some borrowed from Atlantic salmon anglers who, despite rumors to the contrary, aren’t the flipside of steelheaders—is also a part of the romance. So what else can be said about these elusive migrants?

We used to think of steelhead as sea-going rainbows that spawn in coastal streams in the Pacific Northwest—trout that grew on occasion to 30-plus pounds. In a freshwater stream, that’s one hell of a fish and surrounded, no doubt, by a legend or two. Now — thanks to genetic hair-splitting— steelhead have been “demoted” to Pacific salmon. However, in spite of the biological bullying, they still fight like steelhead and once in freshwater, they remain a mystery.

Of course, the rivers they enter haven’t changed their pedigrees, so tweaking the Latin hasn’t altered the bell curve. Meaning they have to be tough to survive. Picture long green riffles on cool fall days, and tall Douglas firs that rise through the mist—an idyll not lost on a bevy of anglers.

Volume One of this two-volume, slip cased edition begins with former editor of Northwest Salmon, Trout and Steelheader, Bill McMillan’s son, John’s in-depth analysis of steelhead biology, from the emergence of alevins from the gravel stream bed to the return of spawning adults, and everything in-between.  From there on out, it’s what Gallagher refers to as “a book of experiences.” Wild River Press published an earlier, similarly-named volume titled “A Passion for Steelhead,” which was written by noted authority, Dec Hogan. Although I have yet to read it, I understand that “A Passion for Steelhead” focuses more on fly fishing technique. Both titles are available directly from the publisher.

Much of “Wild Steelhead” consist of interviews (Gallagher calls them “Around the Campfire”) with the few living personalities in this inscrutable sport—some I remember from my days in Washington State, and others who chose to eschew the limelight—as well as Sean’s personal musings (“The problem is, You’re here!”)  You’ll learn how steelhead have attracted a cult-like following, and how the devout make pilgrimages to their mythic Nirvana—the rivers of mainland British Columbia and Vancouver Island —although there’s plenty of good fishing right here in the States.

Tom Pero, owner/publisher at Wild River Press, is one such devotee. When he’s not casting for steelhead either here or abroad, he’s editing and publishing high-quality sporting books— which showcase the writings of acknowledged experts, along with the usual dollop of breath-taking photography. “Wild Steelhead” is the latest example.