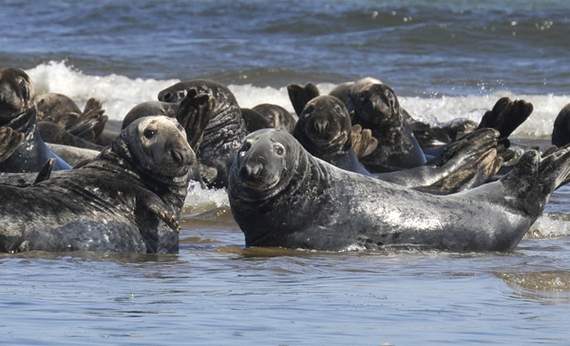 By AndrewJanuary 9, 2013No Comments
By Doug Fraser

[dropcap]P[/dropcap]ROVINCETOWN — Rich Wood knows the names and faces of the people from New Jersey, New York and Connecticut who used to come here in the fall to surfcast for giant striped bass with the magnificent white dunes as a backdrop and a wild frothy ocean before them.

They don’t come anymore to the beaches along the back side of the Outer Cape, Wood said, because it’s too hard to catch anything with the number of seals feeding there.

“Business has changed dramatically,” said Wood, who recently had to close one of his two tackle shops. “You can’t beat July and August, but, traditionally, mid-September to mid-October would be big, my No. 2 season. But people stopped coming.”

“My business is really down,” he said.

Fishermen and business owners blame the resurgence of the gray seal population on the Cape and Islands over the past decade — 5,611 in 1999 compared with an estimated 15,756 in 2011 — for killing off a traditional fall fishery that brought in money in the off-season and helped the Cape gain a measure of fame in the recreational fishing world for catching big bass.

“I have heard the same things,” said Owen Nichols, director of marine fisheries research at the Provincetown Center for Coastal Studies.