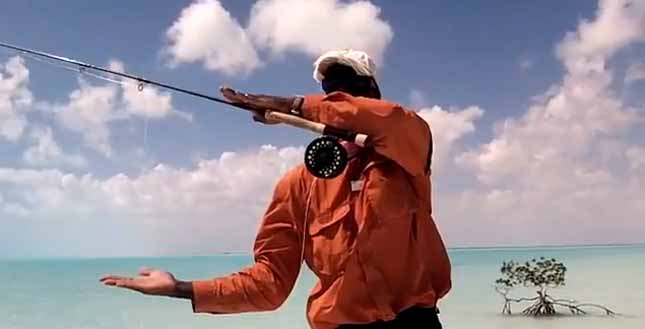 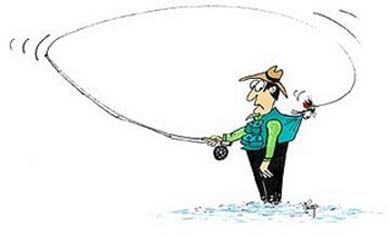 Too many punches to the head.

[dropcap]W[/dropcap]e’ve all been down this road; whacking ourselves in the head and back with a fly when it’s windy and especially when we’re using weighted flies. Slow to learn, I finally decided enough was enough. One day, more than a decade ago while fly fishing for bones in Islamorada, Florida. A lead eye Charlie attacked me from behind and left a residual knot the size a marble on my thick, Irish skull. I realized then that it’s always going to be windy in the Keys, South Florida and the Bahamas, especially in the winter,  and that heavy flies were a part of the game that I loved and that there had to be a better way to cast them without suffering from combat fatigue. We all learned how to modify our casts so as to not keep injuring ourselves, but I knew my modification wasn’t the answer.

I called Andy Caldwell, a friend who’d beaten me to retirement by 11 years. We’d met in Ketchum, Idaho in 1991. He and I loved talk about fly fishing, flies and destinations. We fished that spring after ice-out, all summer long and into fall almost every day. Then we began long-distance conversations almost monthly until he passed away a few years ago. I still miss him. Andy and I were never equals. Andy taught me how to “properly” fly cast, tie flies, swim them like bait and how to catch fish. He was always better than me.

Once he retired, Andy became a professional guide and casting instructor. He spent his summers in Montana in a camper-van parked behind a fly shop that he part-timed at and wintered in the Abacos, Bahamas where he had small studio apartment in Marsh Harbour. He had a Bahamian built wooden skiff that was in its 50s, powered by a new 40HP 2-stroke. The marina where he kept the boat was just a few blocks from his apartment. The skiff was immaculate, sturdy and required a lot of grooming.

Andy had a steady flow of hand chosen clients that visited him in the Bahamas. He had to know you, like you and you had to be a good caster and angler. Bribes to get on his boat didn’t work. Making money was not the object of Andy’s life – never was. 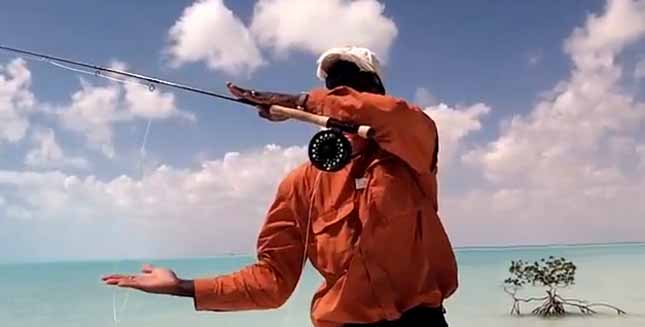 Capt. Shawn Leadon, head guide at Andros Island Bonefish Club, shows the window that your cast needs to stay within. It provides plenty of room for making a rounded, non-stop loop.

I began flying over to the Abacos around 1997 – staying at a rented room down the street from Andy’s place. Andy and I fished at least ten hours everyday, drank a lot of Kalik and talked about fly fishing for a solid week.

My Belgium cast schooling was in real time on the water. The Bahamas, like South Florida and the Florida Keys, always blows 15- to 20-mph in the winter. Although it’s simple to explain how the Belgium cast works – it takes a good bit of practice to be on auto-pilot. I couldn’t say that I had it down cold in one day, but I was more than efficient in three days and by week’s end, I was good, but never “just as good” as Andy. 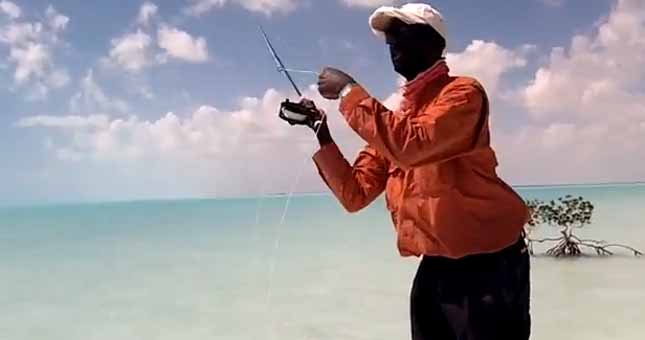 The back cast and haul.

Here’s how Andy explained how the Albert Godart or “Belgium” cast works. First, it’s a side arm backcast, about 40 degrees (+ or -), which will keep the line just about parallel to the water. Second, never let the line stop moving – the rod is loaded until the fly is on the water. Never do anything that causes a “sudden” change in the line speed or the line will collapse into a series of “Ss”. Third, just before the line reaches back cast termination, swing your arm up and raising up your elbow to produce a line swing (similar to two handed casting) that relaunches the line forward, (never directly overhead or you’ll be back to getting whacked in the head again). On the forward cast, your arm should not stop parallel to the water or be pointed at the horizon, but above – angled up.

The double haul is always in play and not at all tricky to employ with the Belgium cast. The final issue with this cast is that it can produce half-twists in the line, but if you can keep the cast rounded out or in an “oval” shape, you’ll avoid that tangle. 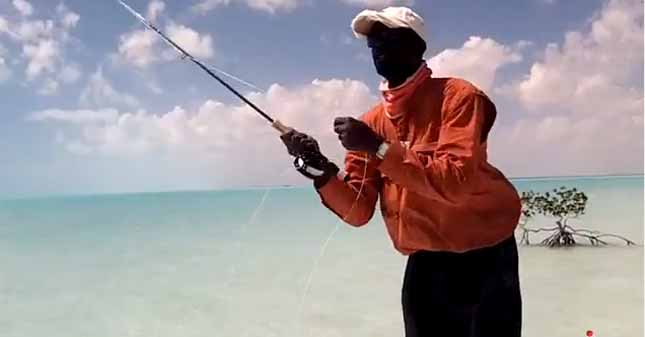 The forward cast and haul

On windier days, which the biggest bones, tarpon and permit are caught, Andy liked to overline by one. One of his 9-weight set ups had a 10-weight fly line with about 2-feet of the front of the fly line cut off. His leader construction would go from about 12-feet to about 9-feet and have ratio of 70>15>15 as opposed to 50>30>20. And he’d use weighted patterns but tied sparsley.

A distinct advantage of the Belgium Cast

The tension of the line is constant – no loss of control at the stops. Round movements are more harmonic than straight movements – no extreme breaks at the stops. Only one cast for almost all saltwater fly fishing situations (oval cast, roll cast and switch cast are created in the same way). It’s a rarity to self hook yourself using a proper “Belgium” cast and rarer still to whack yourself in the back of the head. Too, with the Belgium cast your stronger shoulder muscles are employed rather than the elbow joint – resulting in a lot less stress and fatigue.

Here’s two good You Tube demos of the Belgium cast:

SIDEBAR: In 1975, A. J. McClane, executive editor of Field & Stream wrote a long article  about fly casting techniques, tournaments and about Albert Godart, Lefty Kreh and several others. The article was titled “A Matter of Style” with a sub head; “It’s not how long you make it, but how you make it long – and that’s where the arguing begins.”

NOTE: Godart, a product of the 193os and post WWII, was a Belgian and is credited with promoting the cast. He won several tournaments using the Belgium cast. Fly angling purists in Europe award the honor of inventing the cast to a River Keeper in Belgium named Hans Gebetsroither.

In Godart’s time, casting clubs and tournaments were very popular in Europe and North America.