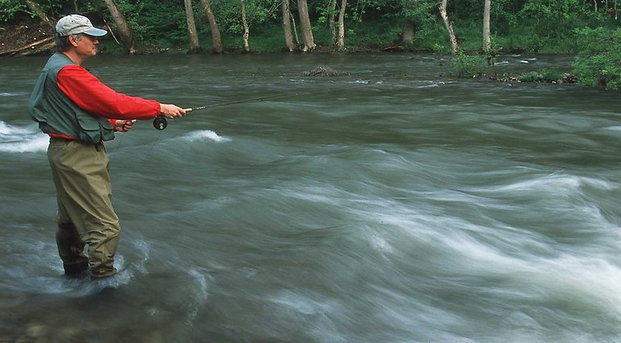 Choosing the right waders and boots

[dropcap]I[/dropcap]n Georgia, all roads leading to a better fly fishing experience in the Blue Ridge Mountains, famed Chattahoochee River (Hooch), salt marshes on the coast or even en route to a sojourn in the Seychelles, go through Atlanta’s Fish Hawk.

The Fish Hawk is the South’s premier fly shop – owned by Gary Merriman. Merriman is Southern Trout Magazine’s class of 2017 Hall of Fame –  inducted into the Legends of the Fly this past February.

Gary’s shop has all the right stuff and staffed with no-nonsense fly fishers who guide their charges to the promised land of better living through better choices.

And so it was for me on a May afternoon, a poor fly fishing soul in search of a better pair of waders and a pair of wade boots to go along for the walk. 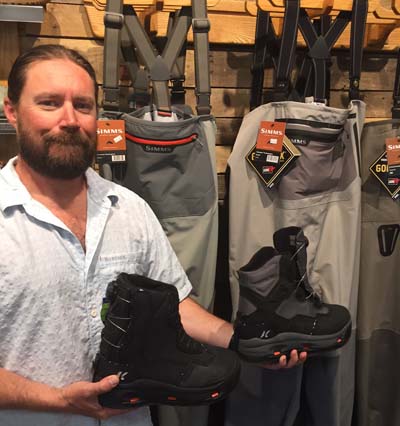 Fish Hawk’s Chad Bryson holding L to R, Korkers’ Hatchback ($240) and Darkhorse ($180). They both come with attachable felt and rubber soles. Aluminum studs are extra. Note: Rubber soles are not your grand mother’s rubber soles, they are much grippier. In the background, Simms’ (L to R) Freestone ($250), Headwaters Pro ($400), and G3 at $500. The latter has five layers of GorTex on the bottom and three on top. Headwater is three and two layered. Freestone is not GorTex.

I read up on both needs to the point where I thought I should have zeroed in but wasn’t sure “exactly” what would be the best investment in waders. My decision on wade boots was not final, but pretty close to final.

In late May, the Fish Hawk was well settled in their new digs, a move from Peachtree to a mile away. The move much better for its day inhabitants and walk-in trade as well – think elbow room and visual experience

Chad Bryson, a professional guide (the real kind) is a highly knowledgeable fly angler. He agreed to take my case without a retainer and heard me out. Without hesitation, he ran through the scenarios of what the responsibilities were for ownership of new waders paired with wade boots.

With Chad, all you need to do is prime the pump and out it comes. He shares dozens of years of guiding in Alaska and throughout the Southeast and his Ph.D.,  The”‘Hooches” Best Holes for Big Trout.

“If you buy an inexpensive, even fairly expensive pair of waders and they’re not GorTex, they’re not fixable if punctured or ripped. If you send these (pointing to Simms’ Freestone model) Tojay Fabric waders back to Simms for repair, they’ll say thanks for buying Simms, but what do you want us to do with them? They’re not repairable.” He adds: “So, will these Freestone’s be an option worth considering at $250? Of course, but only if you fish – say your home waters about a ten times a year, or less, sure. These and others (mentioning Redington and Orvis) would be a consideration. Especially so if your son or daughter were just literally growing into the sport.”

NOTE: The Simms waders, high-end GorTex, are far more comfortable than others I have tried on. Principally, that would be crotch, bulkiness and stiffness issues.

So, are cheaper waders really cheaper?

According to Chad, No. “Not if you fish a lot… 20 plus times a year that entail immersion of a few days at a time, occasionally a week or ten days added in on a destination trip.” Think Alaska, New Zealand, Kamchatka, Iceland or Argentina, for example.

Why I asked? “GorTex fabric is not expensive because it’s a designer statement. It’s expensive because of its guarantee… and guaranteed for a much better reason than fly rods are, it’s tough as nails. And if damaged, send them back to Simms for a $50 fix or a free fix.”

I asked Chad, Some of these other fabrics used to make pretty expensive waders advertise breathable. The Simms Freestone has that advantage in cheaper waders. These non GorTex waders advertise that they are tough and keep on ticking.

“Here’s the thing,” he said. “The less expensive to cheaply made waders will fail in two or maybe three years, and that’s not a maybe. The rub though is that they’re not repairable. And that’s how cheap gets to be more expensive. You have to buy another pair of waders.”

Okay, so what about wading boots? 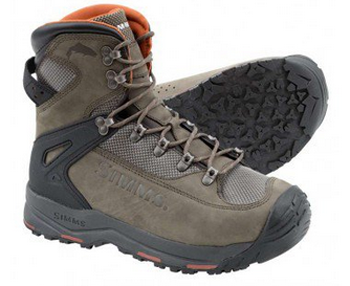 Simms G3 Guide wade boots. Note how high above the ankle these cover.

Chad said, “That has a lot to do with where you plan on fishing. If you’re swinging big flies for steelhead out west in Oregon, Washington or British Columbia, river rocks call for high-top boots like Simms G3 rubber soled. They provide better protection and best stability.

Swinging flies out west doesn’t call for much walking, so having a great walking boot isn’t a high priority with most big water anglers. You fish a few pools and then go back and do it again. The grid pattern on the Simms’ soles are deeper and more random – resulting in grippier than other rubber soled boots.”

Adding, “But if your destinations are mixed riverine habitats, Korkers might be the ticket. The idea of adding multiple and detachable (convertible) foot treads – metal (soft aluminum), felt and rubber is a great one, but early models were a disaster because the detachable tread did just that, detached when they felt like it, not when you wanted. You’d be walking with the current, and your felt soles would pass you by. Today that doesn’t happen because of the design features.”

There’s plenty of advice out there on waders and wade boots, many fly shops carry several brands, but if they don’t carry GoreTex, you’re getting short-changed.

There are many good brands of wade boots on the market. With boots, you have to insist on support and protection with the lightest weight and absolutely must be hydrophobic 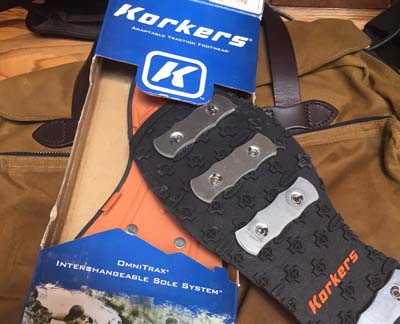 A water soaked boot is heavy and soft – providing little or no support, so think hydrophobic fabrics and similarly capable leathers. The cheaper wade shoes that soak up water end up increasing wading boot cost significantly because you’ll be replacing them all too soon.

Waders have built in neoprene booties. These booties are thick insulating and waterproof socks, so your wade boots need to be one size up. For example, if the waders are rated 11s, you need size 12 wade boots. Some brands, like Simms and Korkers, make clear that need.

Folks with half sizes need to be cautious because all wade boots are not “exactly” alike in sizes.