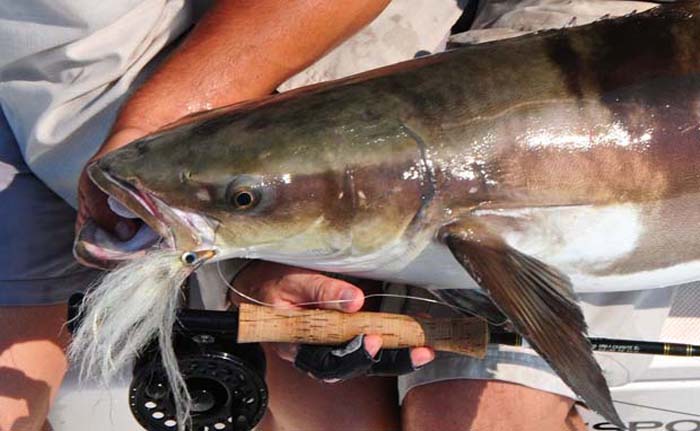 A nice Virginia cobia on a fly. Photo Virginia Fishing.

[dropcap]C[/dropcap]obia (Rachycentron canadum) is not a targeted species, but regarded as an “opportunity” game fish. However, with perfect timing along the Southeastern seaboard, like South Carolina, can prove fruitful with similar summer show-ups along the Gulf coast.

Cobia are not prolific in the shallows (flats) nor schooling except for annual spawning aggregations; however, they will congregate at reefs, wrecks, harbors, buoys, markers and other structures – a good setting for that is Key West.

Cobia use just about the same ambush hangouts as tripletail, but their ploys are entirely dissimilar and the fight vastly different. But, they’re both migratory and pelagic.

As table-fare, cobia are better than tripletail – excellent as a matter of fact.

The International Game Fish Association (IGFA) lists the All-Tackle record at 135-pounds, 9-ounces (caught in Australia – 1985); in Tippet Class (fly tackle) there are various classes of tippet. The biggest cobia on a fly is 83-pounds, 4-ounces on 16-pound class tippet (caught off Key West, Florida – 1986).

Its coloration and markings are distinctive. The back is a deep chocolate color, and the sides are lighter with alternate horizontal stripes that are brownish silver or bronze and white. The broad lateral line stands out. A juvenile’s coloration is the same but more vivid. They look almost exactly like a remora, and like them, they also like to frequently swim with sharks. Cobia are found in tropical and subtropical waters with a preferred temperature range of  68-F +/- to around 86-F +/-. In Florida, Key West is Mecca with cobia around all year long. The best months are usually December through April. Wrecks on the Gulf side turn on as early as November – peaking in February. As the water warms, cobia will begin migrating north in the Gulf, peaking in June-August. The Atlantic migration usually reaches the Chesapeake mid-summer. In the winter, the Gulf of Mexico holds large populations of cobia and the oil rig platforms are popular. Cobia are found in the Caribbean and all the way to Argentina.

Cobia is an inquisitive animal

Norman Duncan, legendary Florida Keys guide, and inventor of the Duncan Loop tells this story. “We’d ride around markers in Key West channels a dozen or so times at a distance of maybe 15-feet from the marker. Then we’d leave and drift back to find the curious cobia had all surfaced to find out what the disturbance was. Then we’d cast into them, and the hookups were in seconds of the fly or lure landing.”

There are a few other scenarios. One, catch one off of a known wreck, or wherever your captain knows of their whereabouts, with conventional tackle using live baits. Bring the fish to the surface, and the brethren will follow, then pitch a fly into the melee.

Also, chum at a likely location and if they rise, pitch a hookless popper – do a bait and switch with the popper and replace it immediately with a fly. It will work like a charm. In both of the strategies, the angler will be within a flats boat length of the boiling cobia. They are curious, like sailfish – undeterred by the sight of a boat or sound of a motor. The bait and switch methodology requires a lot of coordination between angler and captain, and a lot of hard work for the captain who has to keep the cobia interested Also, both practices could bring several other diners to the scene: grouper, kings, amberjack, permit, tripletail, snappers and more. If there’s a third person on the boat, they can pitch small bait chunks to help keep the cobia hot.

On the flats, the best scenario would be to spot one following a ray. The ray, of course, kicking up clouds of sediment and small bait in the wake of it’s skimming along close to the bottom. You’ll cast your fly into the cloud – right behind the ray so that the follower encounters it. A cobia on the flats is more fun, but will tend to be smaller than those that are near-offshore or offshore, but no less willing to do battle. The best flies will be those presented or tied on for you by your guide. However, here’s what works: large white Deceiver with some mylar in the 6- to 8-inch range, big noisy poppers, Randy Morgan’s Cobia Diver in red and white, Bob Popovics Deep Candy Bendback, Lenny Moffo’s version of Del Brown’s Merkin, Seaducer, Clouser Half and Half, Whistler and squid patterns. Cobia is not at all fussy about flies – if there up and hot to trot they’ll hit a Cadillac bumper.

Your fly rod should be no less than a 10-weight, but if you lay into a 40-pounder, you’ll wish you had a 12-weight. One fly line should be fast sinking and the other floating for flats work. Backing should hold 300-yards of 30-pound Dacron. A leader doesn’t have to be long, 9-feet or shorter with class at least 16-pound if you’re IGFA rigging. The shock should be 40- to 80-pound test mono or equivalent fluorocarbon.

A cobia of any size is remarkably strong, and when it runs, you probably won’t be able to stop or turn it to set the drag at only a pound or so and let it run. Sometimes cobia will leap. A strong word of caution, when it seems tuckered and near the boat don’t believe a word of it. It will still be “green” and in a fighting mood. When it is time to gaff it, make sure you get it in the back and under the spine. In one motion, get it into the fish box – it will still be feisty and jerk-twisting like a pole dancer. If it gets dropped on the deck it will tear the boat up and any equipment that’s lying about – you too if you get in its way.