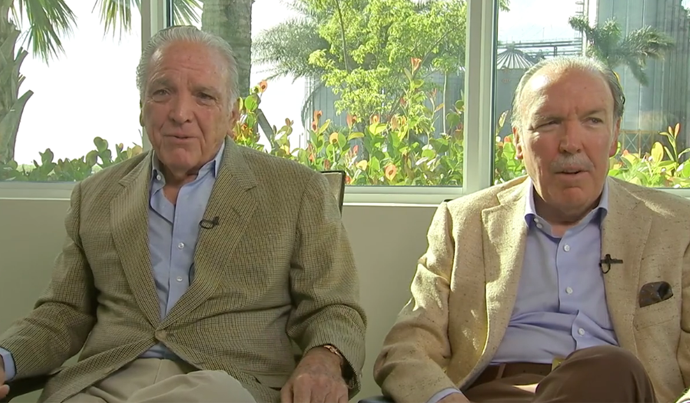 Fanjul brother’s at Induction Ceremony for the Florida Agricultural Hall of Fame on February 13th, 2018. Image is a screenshot.

Can’t fault the Fanjul’s or the Mott family trusts for being on corporate welfare. They just backed Florida’s politicians – both Democrats and Republicans; from town sheriffs to governors, powerful US congressmen and women, 100 US Senators, and those who ran for president of the United States of America… for decades. “It has been like taking candy from a baby” (Como tomar el caramelo de un bebé).

[dropcap]E[/dropcap]motions are high as election day approaches and the 2018 toxic algae crisis grinds on. The good news is that “Vote Water” is getting attention. The bad news is that tribal party ties remain hard to break, even after all the slime, sick people, and dead pets.

There are exceptions of course. Florida Crystals owners Alfy and Pepe Fanjul, for instance, are above partisan bickering. At the end of the day they don’t care which party controls the governor’s mansion or any elected office, they just want results. Alfy manages the Democrats and Pepe the Republicans. The millions they spend on Florida politicians are just small crumbs off the corporate welfare cake that the Fanjuls receive every year, an arrangement that is lucrative for the Fanjuls and politicians, and terrible for everyone else.

As EarthJustice attorney David Guest likes to say, “Big Sugar (Florida Crystals and US Sugar) is not in the sugarcane business, they are in the subsidy business.” These companies feed off taxpayers and consumers like leeches, especially Florida taxpayers, who pay twice. The actual Federal subsidies that double the price consumers pay for sugar is just the tip of the iceberg. Fanjuls: Under Alfonso “Alfy” Fanjul and his brother Jose “Pepe” Fanjul, the family owns 155,000 acres in Florida. That figure makes the Palm Beach County-based family the 63rd-largest landowner in the nation, according to the Land Report. The Fanjuls, the largest employer and landowners in the Dominican Republic, are the majority owner of the world’s largest sugar refiner and have mills or refineries in six countries. They sell sugar and sweeteners globally under the Domino, Florida Crystals and other brand names.

The potentially bigger subsidy is the billions spent on water management in South Florida, and most of the benefit goes to the sugar industry, which is always first in line for water in a drought and first for drainage in a flood. Uninterrupted bumper sugarcane crops for decades, with zero risk and double profits. Results.

Yes, the subsidy business is sweet, all it requires is a steady supply of that guaranteed windfall profit returned to the campaigns of sugar-friendly politicians, rinse and repeat.

That’s why Alfy and Pepe each picked a party–to keep both parties on the gravy train, and to keep either one from growing a backbone when it comes to Big Sugar.

But why is Alfy the Democrat? Did they flip a coin? Is it because he’s more senior, and it’s a harder job? Pepe has to convince conservative Republicans that Florida Crystals isn’t the biggest welfare case in America. That’s not easy, especially when the Heritage Foundation and Grover Norquist say that it is.

But Alfy has an even tougher job. Not only must he convince progressive Democrats that his company isn’t responsible for massive environmental destruction, but also that he’s not a modern day slave trafficker. For anyone who’s curious, there’s ample evidence. Alec Wilkinson’s remarkable book “Big Sugar” documents the shocking, slave-like working conditions on Florida’s sugar plantations in the EAA into the 1980s. In the book, the Fanjuls further distinguish themselves with a reputation of cheating workers of their meager pay more than the other plantations.

More recently in the Dominican Republic, a Franciscan priest named Christopher Hartley made the documentary, The Price of Sugar describing the practice by powerful families–including the Fanjuls–of smuggling Haitian immigrants across the border and essentially enslaving them on their plantations, a practice that Father Hartley recently affirmed is still happening.

Clearly Alfy is not a Democrat because of his Democratic values.

He’s there to put his finger on the scale of which Democratic candidates succeed in Florida. Can you guess how many of those candidates stand up to Big Sugar? Alfy likes candidates that are focused on social issues but out to lunch on anything that would impact the Fanjuls’ business. It’s ok to talk about the environment, but stick to climate change, fracking, environmental scorecards–anything except the things that would impact the sugar industry, like actually saving the Everglades or stopping toxic discharges. And when in doubt, let the Republicans win.

There is grim irony that Alfy Fanjul–the most influential Democrat in Florida, and a supporter of social issues candidates–has been accused of slave trafficking in the Dominican Republic and has a documented track record of horrific exploitation of workers in the Glades communities. But money talks, and there is currently no counterweight to the vast wealth of Big Sugar in the Florida Democratic Party.

The Republicans have their bad actors too, of course. Both of Florida’s political parties have a sugar problem. Both parties also have good candidates. You have to do the homework.

Bullsugar will always support the candidates that have the political courage to stand up to Big Sugar, regardless of party. That’s what it’s going to take to stop these toxic crises: Vote Water.

P.S. If you can, please become a Bullsugar member today to help us find and support political candidates from both parties willing to stand up for clean water.