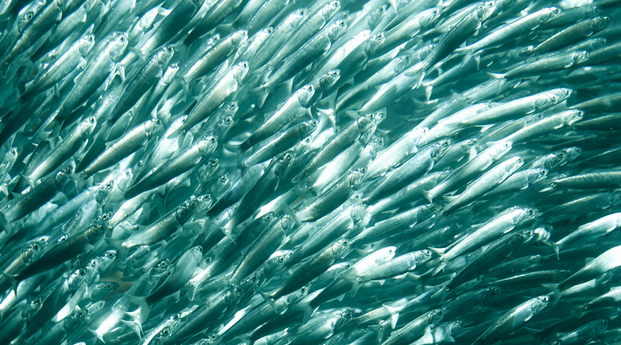 Conservation: Big investment in little fish in the Mid-Atlantic

August 28, 2017 By Peter Baker and Joseph Gordon for Pew Trusts

[dropcap]F[/dropcap]orage fish, the small species that support the marine food web, won new safeguards along the U.S. Atlantic coast on Friday. The National Oceanic and Atmospheric Administration’s Fisheries Service (NOAA Fisheries) announced a final rule directing fishery managers to create science-based measures, such as catch limits, before fishing can begin in federal waters (from 3 to 200 miles offshore) on more than 50 species not already targeted by commercial fishermen. The rule will also help ensure a steady supply of forage fish for the many predators that feed on them, such as striped bass, bald eagles, and humpback whales, and increase security for businesses that depend on healthy ocean systems. When there are enough forage fish in the ocean, the overall ecosystem thrives, helping top predator populations flourish and increasing the yield of catchable fish.

The rule was developed by the Mid-Atlantic Fishery Management Council, which consists of 21 representatives from seven mid-Atlantic states, commercial and recreational fishing sectors, the government, conservation groups, and academia, and largely reflects the version the council passed last year and sent to NOAA to finalize.

Sustaining populations of forage fish is a smart investment in American seafood, jobs, and ocean health. Sensible and far-sighted decisions like these can secure our country’s fisheries as among the most productive in the world.

That’s because when there are enough forage fish in the ocean, the overall ecosystem thrives, helping top predator populations flourish and increasing the yield of catchable fish. In turn, our country gains more seafood from our own waters, as well as expanded recreational and business opportunities. Among those whom this rule will benefit are commercial, recreational, and charter boat fishing operators and their customers; seafood restaurants and consumers; the bait, fish oil, and pet food industries; and other coastal and wildlife tourism businesses.