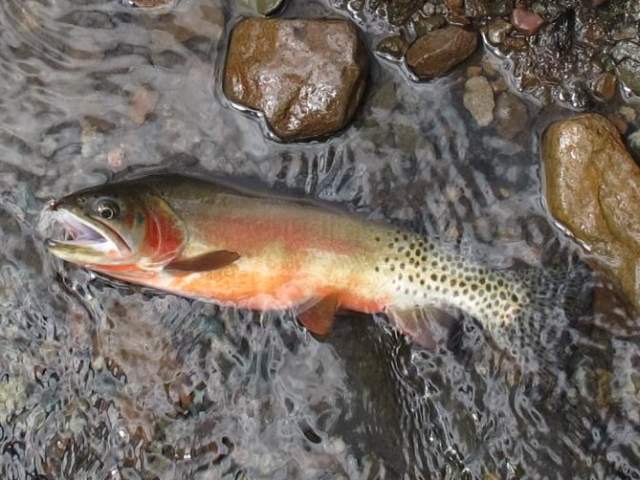 Conservation: Federal agencies and tribes in agreement about trout

[dropcap]T[/dropcap]he states of New Mexico and Colorado, three Native American tribes, and several federal agencies recently signed an updated conservation agreement and strategy plan to conserve Rio Grande cutthroat trout. Managers hope the agreement will prevent the need for federal protection. The U.S. Fish and Wildlife Service is scheduled to decide on whether to list the species in September. “This 10-year agreement provides a detailed road map of the ways local, state, federal and tribal agencies will work together to continue to conserve this trout,” said Kirk Patten, assistant chief of fisheries for the New Mexico Department of Game and Fish. “The Rio Grande cutthroat trout is unique. It is found only in the desert southwest and has the distinction of being the southernmost distribution of any form of cutthroat trout.”

New Mexico classifies the Rio Grande cutthroat as a species of “greatest conservation need,” and Colorado lists it as a “species of special concern.” The trout has been a candidate for listing under the federal Endangered Species Act since 2008.

Over the last 150 years, the historic range of Rio Grande cutthroat trout has been greatly reduced. The trout now occupies 10 percent of its historic distribution in approximately 600 miles of stream. The fish primarily lives in high elevation streams and lakes of the Rio Grande, the Canadian River and the Pecos River basins in New Mexico and Colorado.

Since signing the original range wide agreement in 2003, New Mexico and Colorado have restored Rio Grande cutthroat trout to nearly 100 miles of stream and 27 acres of lake.

“The most effective way to restore the state fish is through these ongoing coordinated efforts,” Department Fisheries Chief Mike Sloane said.