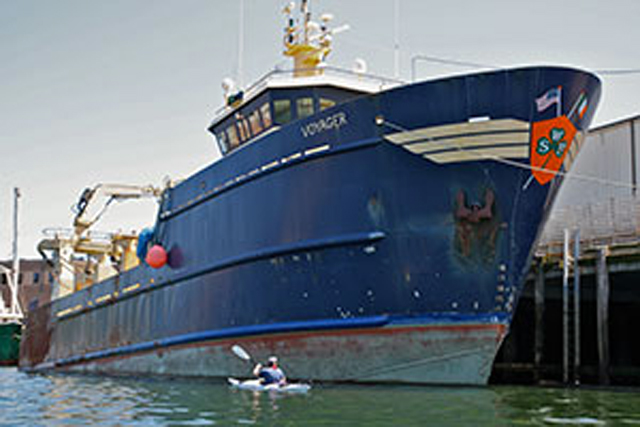 [dropcap]O[/dropcap]ff the Atlantic coast, vast schools of migrating sea herring and mackerel are joined by other forage fish species such as river herring and shad. These great oceanic gatherings draw predators including tuna, cod, striped bass, sea birds, and marine mammals such as dolphins and whales. Massive industrial fishing vessels, called midwater trawlers using advanced technologies, compete with these predators in pursuit of large schools of sea herring and mackerel. Unfortunately, every year the trawlers catch many other species in the process known as bycatch, including millions of severely depleted shad and river herring. The midwater trawlers can catch thousands of pounds of ocean life in a single tow, and some are capable of bringing home a million pounds of fish and bycatch in a single trip. Unfortunately, the vast majority of their trips are not observed by independent monitors.

Two years ago, regional fisheries managers passed plans that would fix this problem by requiring vessel owners to contribute towards the cost of having an independent federal observer monitor every midwater trawl trip. This requirement would help ensure that the rules are followed, all catch is accurately reported (to improve the science that guides management), and incidental catch of shad and river herring decreases over time. Unfortunately, the plan has been unnecessarily delayed for years.