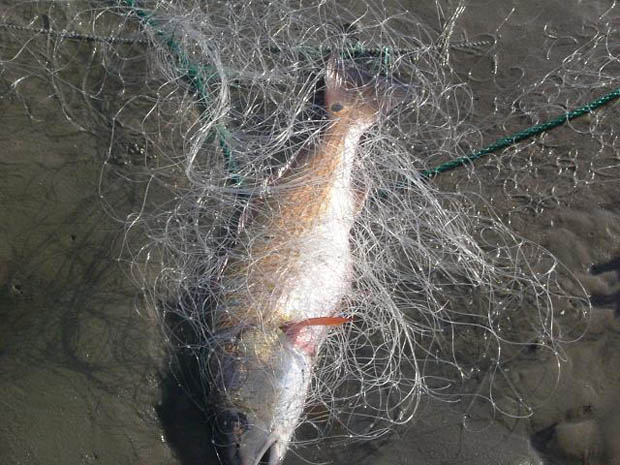 [dropcap]L[/dropcap]eon County Circuit Judge Jackie Lee Fulford yesterday vacated an automatic stay of her controversial order of October 22nd enjoining statewide enforcement of the state’s 18-year-old net ban, virtually assuring an almost open season on Florida mullet stocks during the upcoming spawning season and essentially thumbing her nose at the will of voters of the State of Florida who passed the Constitutional Amendment Limiting Marine Net Fishing. Real controversial Leon County, Florida’s Judge Jackie Lee Fulford. She’s against the will of the people.

The stay of her order became automatic when the Fish and Wildlife Conservation Commission (FWC), through the state Attorney General’s office, filed an appeal of her net ban order.  Lawyers for the Wakulla Commercial Fishermen’s Association, which originally brought the action that led to the net ban ruling, moved to vacate the stay, however, and Fulford granted that motion.  “I do find that there is no irreparable harm if the stay is lifted, and that there is, in fact, irreparable harm if I do not lift the stay. The status quo, I believe in my opinion, has resulted in unnecessary killing and waste, and by adoption of the FWC rules after the net ban amendment, it’s resulted in unfair application of the net ban to some and not others,” Judge Fulford said at yesterday’s hearing.

Jonathan Glogau, Chief of Complex Litigation for the state’s Attorney General and the lead lawyer for the FWC, today filed an emergency motion with the state’s First District Court of Appeal requesting that the automatic stay be reinstated.

Fulford’s October 22nd, order enjoined net ban enforcement and also enjoined FWC from enacting any new rules dealing with gill or entangling nets and from enforcing current mullet fishing rules currently on the books, including the requirement that mullet nets have a mesh size of no greater than two inches. Because the order enjoined a state agency, it has statewide application.

CCA Florida strongly believes that Judge Fulford’s ruling that halted the enforcement of the Amendment Limiting Marine Net Fishing and the rules that are based upon it is contrary to law. CCA Florida will intervene in the lawsuit to protect the Constitutional Amendment that almost ¾ of the State’s voters approved over 18 years ago and to support the rules enacted by the FWC that are based on the amendment.

In her initial ruling she noted that her “decision, could in the interim, cause some turmoil”. CCA’s Ted Forsgren noted that her statement regarding turmoil was a huge understatement regarding the impact of turning gillnets loose on the mullet stocks during the spawning season. “The massive schools of spawning mullet will be slaughtered by hundreds of netters returning to the coastline with their huge gillnets” said Forsgren. “Commercial netters from North Carolina to Louisiana will be swarming Florida to jump on the spawning fish this fall.”

In November of 1994 an overwhelming 72% of Florida voters said “yes” to the constitutional amendment limiting marine net fishing.  The amendment includes both a prohibition on the use of gill and entangling nets in all state waters and a size limit on other nets.  Although the restrictions have been in place for nearly 18 years, there are still factions within the commercial fishing industry who refuse to accept the legal reality that the constitutional prohibition on gill nets means no gill nets.

Numerous administrative challenges and lawsuits have been filed over the last 18 years in an effort to change these regulations, and allow them to use nets that are currently outlawed.  All of the attempts have failed as the Courts have supported the clear intent of the Constitutional amendment.  Early Court decisions have upheld the implementing rules which established a 2 inch size stretched mesh size as the “bright line distinction” between a legal seine net and an illegal gill net.  The size was established based on the historic mesh sizes prior to the enactment of gill net ban.  The Courts ruled that the 2 inch maximum size for seine nets was “Historically based, rational and practical”.

Judge Fulford does not understand the ecological importance of mullet for Florida’s inshore predatory species.  Every inshore fish predator preys on mullet.  Juvenile mullet exist by the millions in Florida estuaries as forage fish for redfish, spotted sea trout, flounder, snook as many other species.  The claims that “baby fish” are caught in smaller mesh nets issue is just a ploy created by the commercial netters. The tiny amounts described by the netters pale in comparison to the amount of juvenile fish taken by inshore predators.  The only way to damage the mullet fishery is to overfish the spawning adults with 3 inch mesh or greater gillnets which was exactly what was happening prior to the ban on gillnets.

Another misconception held by the judge is that commercial mullet fisherman cannot catch fish with the tools allowed to them. That is totally false. Landings data from the FWC verify that mullet landings in Wakulla, Franklin, Jefferson, and Dixie County were 579,527 pounds in 2010 and 493,614 pounds in 2011.  Total statewide landings of mullet in 2011 were 12.5 million pounds.  These fish were caught with legal gear – cast nets and seine nets.

The Constitutional amendment and the implementing rule of the Florida Fish and Wildlife Conservation Commission have brought inshore finfish populations to high levels of abundance.  “Populations of mullet, redfish, sea trout and other fisheries have recovered significantly and the increased abundance has allowed the FWC to reduce take restrictions on a number of species” said Forsgren.

“CCA Florida will continue to be the outspoken advocate and protector of the Constitutional Amendment which has protected Florida’s marine fisheries and the multibillion dollar economic value of fisheries to Florida’s economy,” said CCA Florida Chairman, Jim Williams.

Contact Judge Jackie and let her know what you think. FulfordJ@leoncountyfl.gov