[dropcap]F[/dropcap]Florida is stepping up its assault against nonnative lionfish spreading through the state’s coastal waters and putting marine ecosystems at risk. 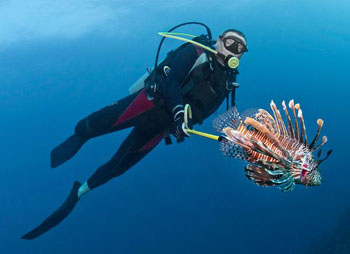 A lionfish’s stomach can expand to 30 times its normal size. This ability and its voracious appetite is what makes it such a frightening INVADER in Florida, the Caribbean, and most recently in the Gulf of Mexico. They can survive temperatures to as low of about 16 °C -. They thrive in  shallow mangrove waters to nearly 1000 feet deep. They’re now a serious threat in the Caribbean, Louisiana , southeast US to as far north as North Carolina. They devour juveniles of many important commercial species, like snappers, groupers, and shrimp. Lionfish also compete with native species, starving them out through competition or by eating them! One good thing, they’re good to eat.
It’s time to consider international controls on live shipments of lionfish. You can order them on the internet. How does that make sense?

Under rules unveiled Monday, recreational fishermen will not need a fishing license to catch the colorful venomous pests as long as they are spearfishing or using a hand-held net. A license still is required to catch lionfish with a hook and line, which is rarely done.

The Florida Fish and Wildlife Conservation Commission hopes the new strategy will recruit more divers to the fight to turn back the tide of marauding lionfish.

“They’re our best possible chance to control them,” said John Hunt, director of the Conservation Commission’s Fish and Wildlife Research Institute lab in the Florida Keys.

Divers have been on the front lines of the fight against lionfish from the start, sponsoring fishing contests and participating in lionfish derbies in the Florida Keys.

Lobster fishermen have taken to carrying specially designed spear guns into the water with them to fend off lionfish that increasingly occupy the same reefs as the lobsters. 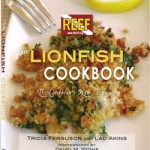