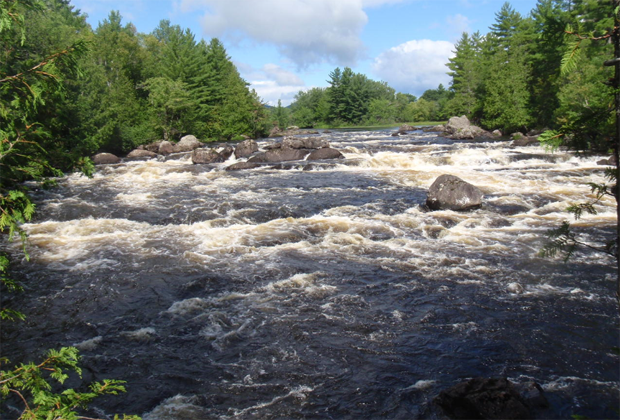 A Plan for the Penobscot

At the Maine Fishermen’s Forum on March 4, 2016, we released a new plan for restoring sea-run fish to the Penobscot River, part of an overarching effort to support healthy freshwater, coastal, and marine ecosystems, as well as vibrant coastal communities. The new plan is organized into three initiatives:

Habitat Protection and Restoration
Research and Science
Communications and Outreach

Penobscot Watershed by the Numbers: Some of the specific activities of the plan include:

The Trouble with Trees

The trouble for these sea-run fish began with Maine’s lumber boom in the 1830s, with Bangor enjoying a stint as lumber capital of the world. With the lumber boom came dams—more than 200 sawmill dams existed on the Penobscot at one point. The mills crowded the river with logs, and sawdust and woodchips began to cover spawning habitat. Over the next 100 years, pulp and paper mills, leather plants, hydropower, and textile mills added to the obstructions and water pollution.

By the mid 1900s, the river was so polluted and dammed that the salmon run, once so highly prized that the first Atlantic salmon of the season was presented to the U.S. President, had dwindled to very low numbers.

Since then, the passage of the Clean Water Act in 1972 led to improved water quality, and habitat restoration work began in the watershed. The largest restoration project, the Penobscot River Restoration Project, came together through the efforts of the Penobscot River Restoration Trust (members include the Penobscot Indian Nation, American Rivers, the Atlantic Salmon Federation, Maine Audubon, the Natural Resources Council of Maine, The Nature Conservancy, and Trout Unlimited), with NOAA supporting the project with technical and financial assistance. With removal of the Veazie Dam in 2014, Great Works Dam in 2013, and construction of a fish bypass system at Howland Dam in 2016, the project is now nearly complete.

But there is still a lot of work to do. That’s why NOAA designated the Penobscot River Watershed a Habitat Focus Area, and is providing greater resources to fish restoration in the watershed .The NOAA Restoration Center has partnered with The Nature Conservancy and provided funding through a three-year cooperative agreement for barrier removal projects in the watershed, including feasibility studies for improved fish passage at head-of-tide dams in Orland and Frankfort, Maine and the construction of a nature-like fishway at the outlet of South Branch Lake. This Implementation Plan outlines how we will work toward this goal over the next few years.