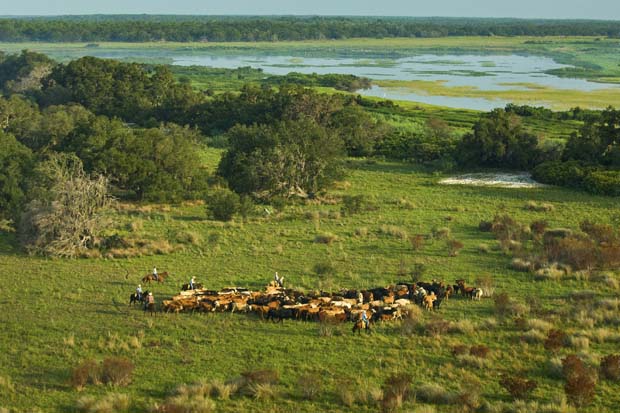 [dropcap]O[/dropcap]ne of the great grassland and savanna landscapes of eastern North America – the Everglades is ripe with protection opportunities that will not only benefit wide-ranging species like the Florida panther but the growing populations on both coasts.

The Everglades is a top Nature Conservancy priority and with your support, we have helped protect more than 360,000 acres within the immense landscape of the greater Everglades over the last 50 years.

Our focus for the last several decades has been on the Northern Everglades, a 170-mile swath of mostly working cattle ranches, longleaf pine savannahs and seasonal wetlands that historically flowed unheeded from headwaters just below Orlando into Lake Okeechobee. These landowners are more interested today than ever in the conservation opportunities being put forth. The Nature Conservancy is advancing multiple conservation outcomes at scale that benefit nature and people by working with a diverse set of partners here.

In the Northern Everglades landscape over the last 30 years we have an impressive record of accomplishments, including several recent successes

On July 13, 2012 an additional 23,000 was added to more than 50,000 acres being permanently protected by the U.S. Department of Agriculture through the Farm Bill’s Wetlands Reserve Program. U.S. Secretary of Agriculture Tom Vilsack came to The Nature Conservancy’s Disney Wilderness Preserve to announce $80 million in financial assistance to acquire conservation easements. Nature Conservancy President Mark Tercek joined Vilsack and four other Obama administration officials at the news event.

May 16, 2012 a large piece of land critical for wildlife passage and the natural recovery of the Florida panther was purchased and protected by The Nature Conservancy and a collaborative public and private partnership. Conservation easements established on the 1,278-acre American Prime property along the Caloosahatchee River in Glades County protect a key natural landscape through which Florida panthers can disperse from habitats farther south. This acquisition required a sequence of events involving the Natural Resources Conservation Service (NRCS), the U.S. Fish and Wildlife Service (USFWS) and other agencies and was accomplished just in time to prevent the land from going to foreclosure auction.

A 150,000-acre refuge established by the U.S. Department of Interior through the U.S. Fish and Wildlife Service Jan. 18, 2012 with the Conservancy’s help. The Everglades Headwaters National Wildlife Refuge and Conservation Area is authorized for 50,000 acres in outright ownership and 100,000 in conservation easements that connect or buffer many of the current conservation properties in the landscape.

The ecologically rich Avon Park Air Force Range in the center of the Northern Everglades has been awarded $2 million in 2011 through the Department of Defense to enhance military readiness by purchasing conservation easements from willing sellers along its borders.

The Nature Conservancy’s Disney Wilderness Preserve revolutionized the way agencies, business and conservationists think about the benefits of nature. In December 2011, the 20-year project with The Walt Disney Company and the Greater Orlando Aviation Authority is declared a business and conservation success: water was returned to nature; the project changed the face of wetland mitigation; a portion of the property is leased to a local rancher for grazing cattle.

Wildlife, Water and a Way of Life

Here’s why protection and restoration of the nearly 4 million-acre Northern Everglades is vital to Florida’s ecological and economic health.

Biodiversity: Many imperiled animals and plants call the Northern Everglades home, and its variety of globally rare habitats and natural communities hold profound biological significance. The Florida panther and black bear, the Eastern indigo snake and gopher tortoise, and birds such as the grasshopper sparrow, snail kite, wood stork, crested caracara and Florida burrowing owl are all native to the region.

Ranching community: Cattle ranches cover nearly one-sixth of Florida’s landmass and much of its remaining native habitat. They also provide employment and contribute significantly to the local tax base. Ranchers use management techniques compatible with conservation goals of natural lands. A well-managed ranch provides some of the same ecological functions as a protected area, and serves as a wildlife corridor between otherwise isolated public lands.

What the Conservancy is Doing to Conserve the Northern Everglades

Facilitating the protection and restoration of wetlands. For more than two decades, the Conservancy has identified conservation properties, assisted and encouraged ranchers to protect and restore critical lands, and provided expert testimony to Washington decision-makers in support of the region’s protection. Restoring natural wetlands on select ranches will improve historic water flow patterns in the watershed.

For example, our work with ranchers facilitated the July 2010 investment of $89 million in conservation easements for the Fisheating Creek basin – one of the least-altered tributaries to Lake Okeechobee. The USDA’s Wetlands Reserve Program will restore nearly 40 square miles of private land for future generations, often reducing taxes for the landowner while protecting wildlife habitat.

Encouraging efforts to create new national wildlife refuges. In April 2010, President Obama announced America’s Great Outdoors program, which includes conservation of large, iconic landscapes. The Northern Everglades was named a top priority. The Conservancy is working with the U.S. Fish and Wildlife Service on proposals to create two new national wildlife refuge sites and expand an existing one that will conserve imperiled species and their habitats.

Documenting the effectiveness of wetlands restoration. At the Conservancy’s 12,000-acre Disney Wilderness Preserve in Kissimmee near the headwaters of the Everglades, our scientists have demonstrated best practices for restoration of former ranchlands. Within this innovative mitigation project, we evaluate the potential of wetland areas to serve as natural water storage areas and increase water quality.

Saving Hatchineha Ranch. Despite having one of the country’s highest concentrations of threatened and endangered species, the ranch’s 5,134 acres were slated for suburban development before the Conservancy purchased it in 2009. Protection of this large conservation landscape is part of the Conservancy’s Northern Everglades strategy.

Serving on advisory and management councils. The Conservancy helps advise the state and federal agencies working in the Everglades on a variety of issues, including land protection strategies and responses to invasive, non-native species. We also lead several innovative Cooperative Invasive Species Management Areas, known as CISMAs, which help private landowners control invasive species on their property. We help provide needed fire to the land of our state partners and remove invasives through the Central Florida Ecosystem Restoration Team.

With solid, regional relationships and a wealth of natural resource information, the Conservancy is a proven leader in the effort to protect the Northern Everglades. We’re excited about recent interest in the region’s protection, yet recognize that much remains to be done.

In fact, today we have an unparalleled opportunity to conserve and restore a fully functional, reconnected wetland corridor in the Northern Everglades. A window of opportunity is wide open – and the time to act is now!