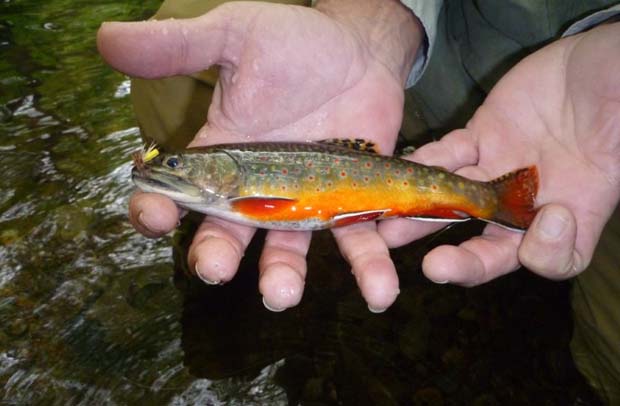 The belly of the fish I was holding in a nameless rill high in Great Smoky Mountains National Park glowed with impossible shades of orange. Underfins were trimmed with ivory; chestnut flanks bore specks of ruby ringed with sapphire. Brook trout can exceed two feet in length, but at 7.7-inches this one was big for its habitat. Recovered from its recent jolt, it shot back into the icy flow.

Park biologist Matt Kulp had electro-shocked it in his search for much larger rainbow trout stocked decades earlier when “a trout was a trout” and quality was measured by weight. In the park’s headwaters Kulp and his colleagues have been shocking rainbows and tossing them below impassible falls or, in bigger water also sealed by falls, killing them with short-lived poison. That’s because brook trout belong here and rainbows, from the Pacific Northwest, don’t. So far, the natives have been restored to 27.6 miles of 11 park streams. But this older race of brook trout, unique to the southern Appalachians, has been extirpated from 95 percent of its habitat. 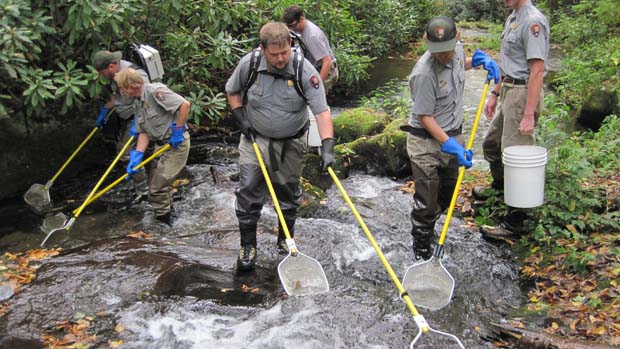 Fishery crew surveying a brook trout stream in GRSM via electrofishing. (In some cases, we have used electrofishing only as a means of brook trout restorations to remove non-native fish such as rainbow and brown trout. However, the stream has to be fairly small for electrofishing to prove a viable method. Photo courtesy of Great Smoky Mountain National Park

Everywhere in the species’ natural U.S. range, from Georgia to Maine and as far west as Iowa, there is less and less of what it needs most — cold, clean water. The brook trout’s scientific name, Salvelinus fontinalis, translates to “dweller of springs.” Brook trout in America (and even Canada) are being lost to habitat damage and alien fish.

But recovery work is underway. On the warm, windless morning of December 23, 2015 I toured Red Brook in Plymouth, Massachusetts with Steve Hurley, regional fish manager for the state Division of Fisheries and Wildlife, and Warren Winders and Geof Day of the Sea Run Brook Trout Coalition.

Where brook trout have access to the ocean they’ll take advantage of that rich environment. Reversing the growth cycle of landlocked fish, these “salters” fatten in winter, then find summer refuge from striped bass, bluefish and ospreys in freshwater. Red Brook’s salters would have been lost to cranberry culture had not passionate angler Theodore Lyman bought much of the watershed in 1870.

In the early 1990s, when Winders, Day and other advocates urged the Division of Fisheries and Wildlife to protect Red Brook’s native trout, they were told that such fish didn’t exist. When they showed them to the Division they were told that the fish were merely offspring of hatchery trout. When genetic analysis by a graduate student proved Red Brook salters were not only distinct from hatchery stock but also from other salters the Division became a believer and protector.