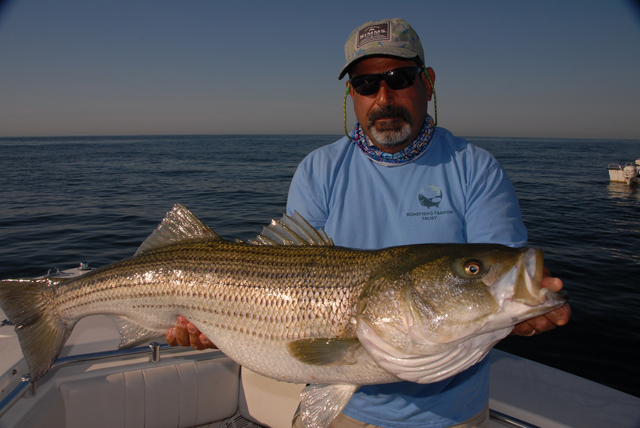 Conservation: With striped bass catch and release, are we innocent?

Catch and release mortality isn’t insignificant, but what are we supposed to do?

[dropcap]W[/dropcap]ow, man … epic weekend. There have been some scary big stripers around the bunker schools off the South Shore of Long Island during the last couple of weeks. Yes, again, I’ve seen more 40s and 50s in the last few days than I’ve seen in my entire life, including all those other times I’ve said that. We even had one on that I swear was every bit of 60, maybe 70, before it spit the hook. It’s a really short window in the morning, and I wouldn’t say we’re catching a lot of fish, but the quality is ridiculous.

It’s been real, real good, man. My entire disposition is different than it was just a couple of weeks ago when the fishing pretty much sucked. With the exception of a few “OK” days here and there, the entire season up till recently was terribly depressing – mostly because the painful reality that there are fewer stripers around these days has really set in. I’m 100 percent Irish, in my early 40s, and I hardly ever sleep more than five hours because I fish a lot. I have a short temper, probably drink too much and I’m a pretty bitter/jaded dude. A total stereotype. Usually, nothing is good, and I hate everyone. Until I have a few good days of fishing, then I’m Mister Happy-go-lucky. Don’t worry, though, it will wear off … right … now.

First, nothing kills a good fish buzz like seeing a fleet of weekend warriors in their bowriders and cruisers (you know, the boats that look like giant sneakers) gaffing every 40- to 50-pounder they are able to get to the boat. These are generally the same morons who say that “the fishing is great” and “everything is fine with the striped bass stock” because they managed to be lucky enough to stumble on one or two days or even weeks of good fishing during the entire season. Certainly they don’t have the broader perspective of people who are out there 100-plus days a year and who have been doing this shit for 20-plus years. Perhaps worse are all of those guys gaffing fish who do understand what’s happening, yet, when the fish do show, they feel entitled to kill every last one. Irritating man… 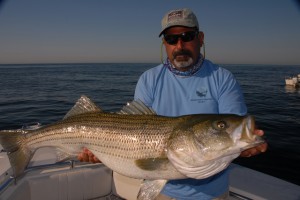 I’ve said it in three different posts already, but I have to say it again here (hopefully this will be the last time). It ain’t where the fish are; it’s where they aren’t. Just about everyone who spends time on the water from Virginia to Maine is seeing a definite lack of striped bass in their usual haunts. Yes, there are some extraordinary bodies of fish, like the one I’m talking about here, but that sort of thing really only highlights where they aren’t. And they aren’t a lot of places. It probably goes without saying at this point, but an abundant, healthy stock is expansive and widely distributed. I wanna wring the necks of those dummies who still insist everything is OK.

I’ve also got to note some of the similarities here to the last striped bass crash. Before the stock completely collapsed, the fishing was again “epic” in various isolated times and locations, including both Cape Cod and Block Island. There were a shit-ton of 50s and 60s caught back in the late 70s (and mostly sold) right before the crash. It’s hard not to think that we might be headed down a similar road and that history is repeating itself.

But I’ve pretty much said all this stuff before. I wanna talk about all us high-and-mighty stone-throwers who are at least trying to release these fish. It’s a damn uncomfortable question, but are we living in glass houses?

I’m gonna confess here. We badly gut hooked two fish over 40 pounds during the weekend. Hey, it happens … particularly with this sort of fishing. I’m not talking about just live lining, because if you use circle hooks, which I generally do, then you can avoid gut hooking fish 95 percent of the time. I’m talking about the snag-and-drop routine, with a weighted treble. Yes, after the first one, I switched over to snagging, bringing the bait in and switching it to a circle-hook. But, um, we didn’t get a touch after that.