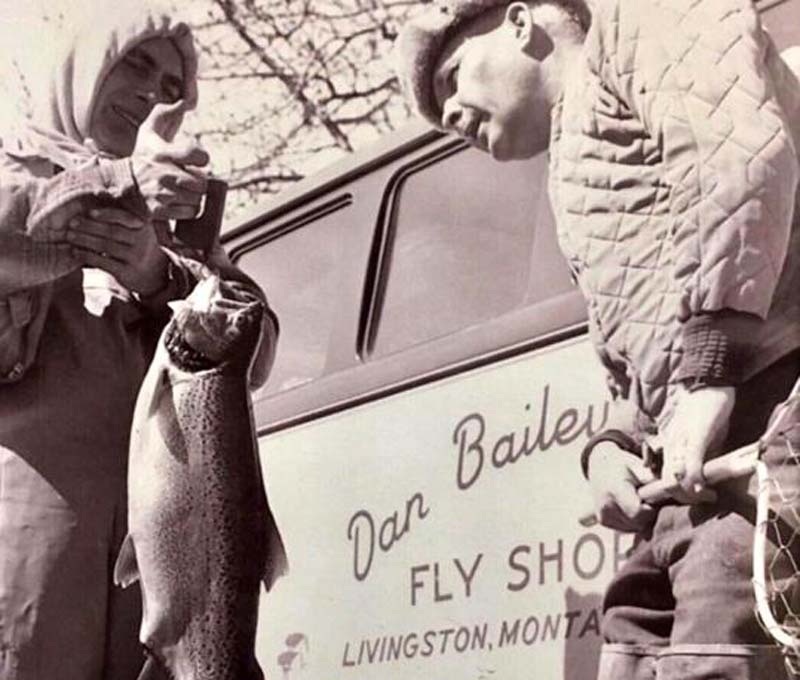 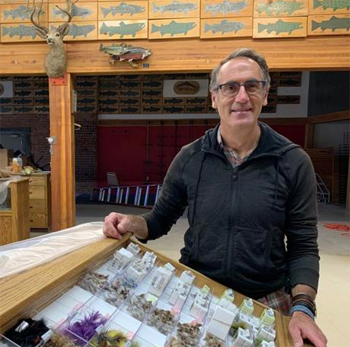 Dale Sexton, June 2020, new owner of Dan Bailey’s has a long history of association with the most famous fly shop in the U. S. Photo by Bradley Warren Wake Up Montana [excerpt shown.]

LIVINGSTON — There’s an added burden when taking over an historic business. That may be why Dale Sexton seems a bit fatigued as he gives a tour of Dan Bailey’s Fly Shop, which he and Mark Gurley purchased in April.

“It’s been a mad scramble,” Sexton said as a carpet layer worked in an adjoining room.

Sexton moved the contents of his Timber Trails outdoor store, located only a few doors down Park Street, into the old fishing store this spring. Now Dan Bailey’s is about more than fishing. There’s a bike shop in the back, skateboards on the wall and hiking gear tucked into another corner.

In deference to the building’s history, the walls of the shop are still decorated with wooden plaques. Each one of the 450 boards on the Wall of Fame contains the black outline of a trout, the name of the angler who caught the 4-pound or bigger fish, the water where they caught the trout and the fly they used. A 1949 Billings Herald article said the wall “has become one of the most coveted fishing trophies in the West.”

“You don’t usually co-mingle a bike and fly shop,” Sexton said. “But it’s part of our past.”

By 1949 the Billings Herald newspaper was offering free Dan Bailey flies to anyone who started or renewed their subscription. One article called Bailey “Lord of the Flies.”

“This business is just iconic in the fly-fishing industry and foundational in Livingston,” Sexton said.

In the 1950s the shop was well-known across the country, thanks to the patronage of renowned anglers like Lee Wulff and Joe Brooks. Bailey also started selling flies, and eventually other gear, through a catalog. The business became so big — employing 31 workers — it was shipping 700,000 flies around the world at its height, employing a host of local women who tied the flies. In 1956, the business moved to 209 W. Park St. where it remains today.

It was 1938 when Bailey and his wife, Helen, moved to Livingston to forge a new future. Had they stayed in Brooklyn where he was studying and teaching physics, his life would have had a very different trajectory according to his son, John Bailey.

Instead, Dan Bailey rented a shop in the Albemarle Hotel where he tied and sold flies, along with other fishing gear. The couple lived in the back of the store.

In 1946, a Fortune magazine story helped boost Dan Bailey’s fame by including paintings of his flies — the Joe’s Hopper, as well as “Variations on the Coachman,” which McDonald called the “most famous of all trout flies.” The 10 Coachman flies were tied “by the crack Montanan, Dan Bailey.” That same year, Red Monical joined Bailey as a partner in the business.

Every one of the 450 fish plaques on the Wall of Fame at Dan Bailey’s Fly Shop has a story, a fact that has been repeatedly driven home to new owner Dale Sexton.

The first day the store opened in June a local musician came in looking for his grandfather’s plaque.

“Are you kidding me?” Sexton said, not realizing that the musician he had long known was Chico Horvath’s grandson.

Horvath was a painting contractor who worked for Sexton’s father, a building contractor. As a boy, Sexton played catch with Horvath at his father’s job sites. Horvath died in a 1978 plane crash. Hhe and the pilot were scouting Emigrant Peak prior to a planned climb of the lofty Paradise Valley mountain.

“Every one of those plaques on the wall has a story,” Sexton said.

The custom of the plaques started when Dan Bailey outlined the body of a large fish he had caught on a cabin wall in New York’s Catskill Mountains. Since Bailey would eat the fish he wanted others to know how big it was, Sexton said.