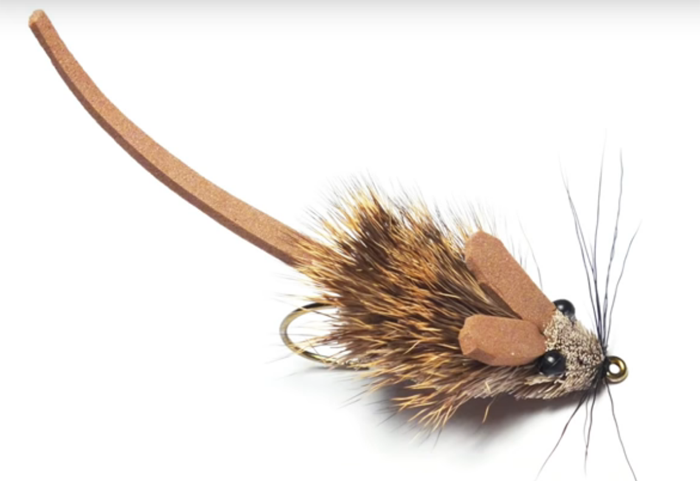 It’s cold and sunny, dressed right it’s nice enough to be outside – no wind, but at 21° with generous ice patches on side roads and stream rocks, my fishing will be done at the vice. Today, the orthopedic surgeon in the ER can relax.

Mousing for lunkers in Alaska

I was skunked once mousing, but that’s only in dozen or more dedicated outings in a drift boat, but never in Alaska. The best hookups mousing to go to Alaska. They have a trout feed nursery called voles. There’s nothing quite like it. Some trout we’ve opened up over the years have a dozen or more voles in various stages of being digested.

How about mousing in the Southeast?

The major waters in North Georgia and Western North Carolina do limit post-sundown or pre sunup fishing, but there’s a window of a half hour post-sundown and pre sunup on those denied rivers. There is a loophole that challenges the law as written regarding night fishing, but you need to research that on your own.

Many rivers do allow night fishing. Those that are closed are clearly defined in Georgia’s and North Carolina’s regs. Recently, a few rivers in NC, previously closed to night fishing have opened to night fishing, the premiere of which is the freestone Davidson River.

It’s best feature is it lends itself well to fly fishing on foot. Additionally, you can cover new water by just moving to a new pool – lots of bows with some browns in the sofa-size class.

In North Georgia and North Carolina, your not going to get a guide roused by your wanting to mouse at night and it will probably not be why you think. It’s just not something that has a history of being productive

My friend and pro guide Chad Bryson, an Alaskan, GA, TN, and NC veteran and his friend fished the Toccoa River professionally for many years – each chalking up 100 hours a year on it. The Toccoa is tailwater fishery like the Chattahoochee River, but it rises only a foot during release versus 10-feet for the “Hooch.” Their collective night exploits fishing mice were three trout in the usual size – no lunkers.

There’s no secret place where mousing is the magic bullet – it’s just not popular in Georgia, North Carolina or Tennessee

Paradoxically as well as a complete surprise, the best fly shops in the Atlanta area had several mouse patterns? Go figure.

Foam floats much better than the shammy/leather, making the fly float and fish much better!  The Mouse Rat is most commonly used for predatory Alaskan Rainbow Trout (and Russian Trout too), but is also great for Bass, Pike and Musky.” — Intheriffle

Ears: Brown 2MM Thin Foam (I do not use ears)

Glue: Brush On Zap A Gap

So, if you’re on your way this summer to Alaska, here’s a freaky easy mouse pattern by Intherifle with the credential of being a Dave Whitlock fly.