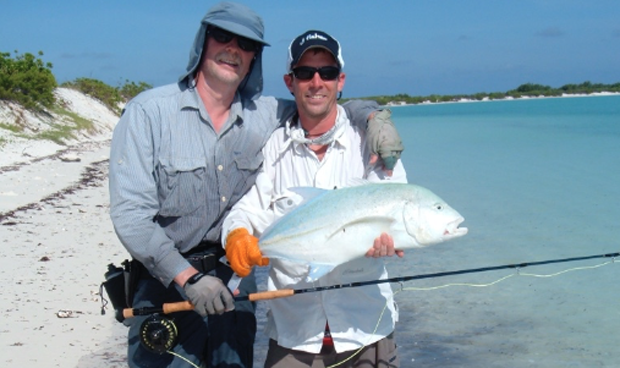 Giant Trevally Give Anglers a Fight on Christmas Island

There are 33 varieties of trevally. The biggest of these is the giant trevally (GT). Its scientific name is Caranx ignobilis (classified in the jack family, Carangidae). They are found in the Indian Ocean (Seychelles) and western Pacific Ocean (Kiribati / Christmas Island). It is easily distinguished by its steep pitched head. It will eat whatever fits in it’s substantial mouth. The are generally offshore in deeper water but at high tide they will come to the flats and hunt in small packs or as large singles. Their assaults are vicious.

On foot, landing one is a task unmatched. I only hooked one on the split culture island of Saint Martin (Dutch / French). It was with borrowed spinning gear and a plug. My Dutch speaking guide said it was a 40-pounder. It ran the shipping channel of a long foreclosed salt mining operation, and took with it plug and entirety of line. I never as much as slowed it down.

[dropcap]A[/dropcap]s a non-fish-eater, I was taken aback when Peter Kairaoi, the lead guide for , took a healthy bite from a dead and rather pungent milkfish he was shredding and tossing into the water for chum. But my gag reflex was pre-empted by a burst of adrenaline as Kairaoi interrupted his sashimi snack to yell, “Trevally!”

A large shadow moved onto the flat, zigging and zagging in search of its next meal. It sped toward us in the shallows until half its immense head was above the water. I cast my 12-weight — a telephone pole of a rod — in the fish’s direction, hoping that my offering would prove tempting, or at least discourage its advance.

Giant trevally, or G.T.’s for short, are the largest of the 33 species of trevally that swim in the Pacific and Indian Oceans. Silver-shaded with prominently forked tails, they are easily distinguished from other trevally species by their steep head profile. They will prey on anything they can catch and squeeze into their capacious mouths: mullet, juvenile milkfish, even bonefish. Generally found in deeper water, they will sweep onto the flats — often in groups of three, four or five — in pursuit of prey. Giant trevally can reach weights of 120 pounds and more, though anglers are more likely to encounter specimens in the 10- to 50-pound range. Many are thankful for that.

“Anyone who has had the opportunity to fish for giant trevally knows that if you get an opportunity at a trophy G.T. — a fish of 50 pounds or better — many things need to go right get the fish to hand,” said Brian Gies, co-owner of Fly Water Travel. “More often than not, somewhere in the string of events something goes wrong — a rod breaks, knots give way or coral severs the line — and you’re left standing on the flat, heart and mind racing, knees weak, playing the situation back in your mind.”

It was the promise of bonefish that initially lured anglers to Christmas Island, an isolated coral atoll some 1,200 miles south of Honolulu, part of the island nation of Kiribati. Since the early 1980s, the atoll’s vast interior lagoon, a mix of sand and coral flats interspersed with deep cuts that usher tidal water to and fro, has been renowned as one of the world’s most prolific and reliable sites for the sleek, finicky sport fish. In the course of stalking bonefish, anglers discovered giant trevally, sometimes in hot pursuit of the bonefish they attempted to play to hand.

There are three ways that fly anglers can pursue giant trevally on Christmas Island. They can establish a post on a flat adjacent to channels with a healthy current and then chum, waiting for the fish parts to draw in other baitfish that will (they hope) in turn lure in the G.T.’s; they can slowly cruise the edges of the flats in one of the island’s motorized catamarans, scanning for G.T.’s that can then be stalked on foot; or they can pursue bonefish on the flats while carrying a 12-weight rod in their pack and switch rods if they happen upon ambushing G.T.’s (easier said than done).

Chumming proved most productive for my group, though it was not until the fifth day of fishing that our flies found purchase. After capturing a brace of milkfish in a seine net, the guides Moana Kofe and T. John anchored our cat on a small coral island and positioned four anglers opposite a channel. Darkening hues of turquoise hinted at the deepening water before us — the domain of trevally.

As Kofe and John tossed chunks of milkfish into the water, great frigatebirds hovered just above them, occasionally plucking a morsel from the surface. Giant trevally materialized in less than 10 minutes, two fish at the point of the island, a gang of four in the shallows in front of the channel. They moved deliberately in search of food, churning the water, swirling at our flies.

Two anglers hooked up in rapid succession; one had only six feet of leader outside of his rod tip when the fish took. Soon we had all hooked and landed fish from the melee, the largest approaching 40 pounds

Before the fishing slowed, I flipped my streamer, a concoction of long white chicken feathers, to the edge of a group of circling trevally. A leviathan that Kofe estimated near 60 pounds charged out of the depths, seizing the fly  . . . read more . . .