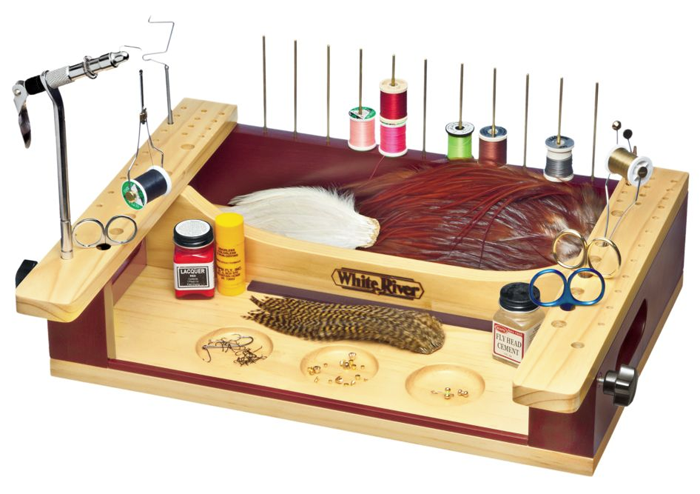 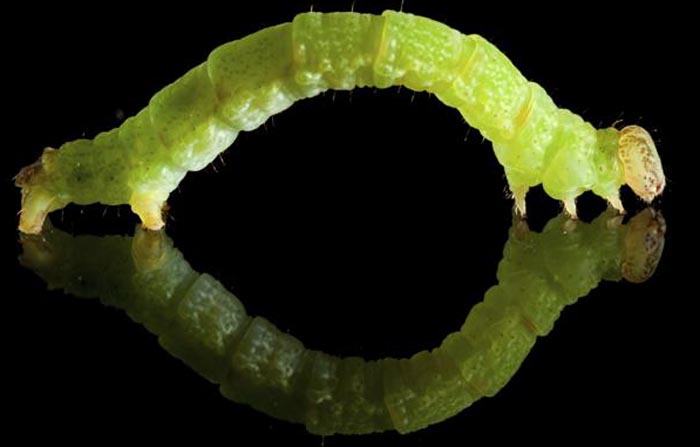 Mirrored image shows locomotion and thus the inchworm name. There are 35,000 known subspecies. This one will turn into a moth. Photo by Animal Sake – invited to share.

An old vise, a tin of mixed hooks, a baggie full of tying material odds and ends, a half bottle of this and that can turn a sh*t day into the best day ever… if you use them as an emergency fly tying travel kit.

[dropcap]S[/dropcap]parse, cheap fly tying kits, with all the tools miniaturized – taking up less space than a TV tray can be found for less than $70 at your local fly shop. These kits make possible complete tying capability if your truck, SUV, RV, car, or lodging if nearby. It’s a little over the top, but if paddling a kayak, canoe or an inflatable, or if you own a skiff these kits and a Zip-Lok bag or two of tying needs, relevant to where you’re fishing, can produce a magical day.

The profile of a magic day and how a tying kit, sort of, made it happen

Angie and I invited Jim Waters, a guide friend of ours [California] – now retired and living in North Carolina to fish with us on the Eberle Farmstead, a many acred property on the border of Georgia and North Carolina rich in riverine assets and Appalachian peaks. It’s been an Eberle property since before the Great Depression when Judge Eberle, a Chicagoan and said to be the smartest guy in the room kind of lawyer, represented Chicago’s Prohibition liquor interests. Yea, them. My joke about Jimmy Hoffa buried on the farm grounds was not considered funny.

Angie, getting a report from Robert, the part time caretaker of the farmstead had told her the water was low, but it was still cold for late June, and midges were active all day, and that something else was going on, but Robert wasn’t sure what it was, but created, he said, a lot of surface feeding interest. Robert wasn’t much of a fisherman but learned from Angie and her sister he’d never be wrong if he said midges.

It was his puzzlement that challenged Angie

By the time Angie and I arrived at the Farmstead, Robert had already let Jim in and had gone for the day. It was too late and too muddy for a shot at fishing – it had been drizzling for two days, and everything dripped, and it was unusually warm, and the humidity reminded me of Ft. Lauderdale. So it was libations and then grilled steaks, and then more libations for the two of them. Neither missed me when I went to bed.

In the morning, their start was slow, and my coffee, fruit, and toast layout were appreciated. Eventually, we all piled into the vintage chop-shopped Land Rover and bounced our way over unkempt dirt roads, thankfully low water streams, and no toppled trees to block our passage.

We made the Cut-Out, a name the Judge had given an odd-shaped parking area with a spectacular mountain view and the place of our usual start. After a short assembly of the uniform choices of the day, 4-weights, floating lines and 12-foot 5X tippets – the only thing missing trout tempters, flies.

The section we would first fish together was all hardwood with trees banking both sides of the river with minimal ground cover. It was a wide piece of water, maybe 40-yards, slow-flowing with countless riffles that disappeared around a bend maybe 100-yards away. The section we’d start at usually yielded smaller rainbows, an occasional smallish brown, and once in a while, a washed down hand-sized brookie with coloring so electric we’d take a dangerously long and life threatening stare. 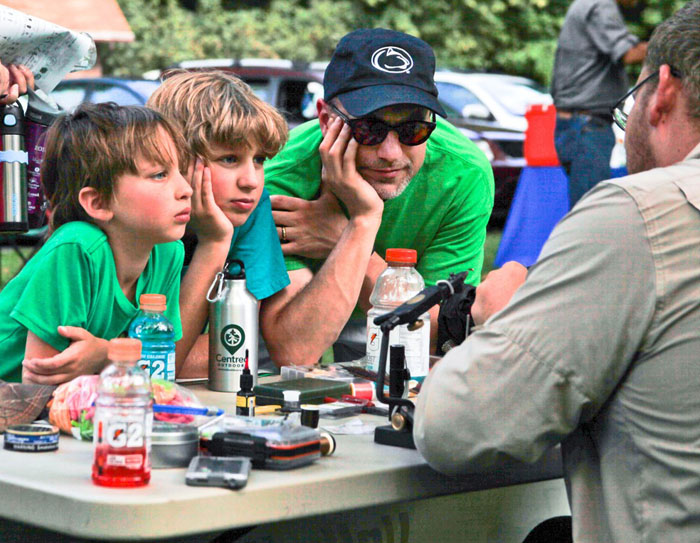 I have not found tying out of the back of my truck, tailgate down, to be an issue, but add wind and weather, and it would be impossible. That said, I can only recall being in such a hurry as to need to tie “right now” less than a half dozen times in 50 years. I do remember being offshore in New Jersey a few times on a vessel with a cabin, providing sit down space to tie. Most of the other “right now” tying occasions on my friends “bus-size” RV fly fishing in West Central Pennsylvania, and near Elk Creek [Erie, PA] fishing for steelhead in February in sub-freezing weather. Packing spare tying tools and materials for destinations has never been a customs issue except for the Bahamas once many years ago.

The gulping disturbance was over the top and the rainbows and guessed to be browns and bass were not small. What was triggering the feed?

Jim figured it out first but fessed up that more than a half dozen green inchworms had found his hat and shirt all because he was under low branches of guessed to be maples. Informed, it was soon wall to wall inchworms crawling streamside, falling into the water, inching over rocks – they were everywhere, and the trout were going crazy.

Yup, you guessed it, nobody had anything that could be substituted, so back to the farmhouse and Jim’s SUV. He had a travel tying kit and after an audit, enough hooks and chenille for a truckload of green inchworms. They both looked at me. And I knew my fate; I was faster than Jim at tying and Angie was ten-thumbed. After laying out the tailgate, I made up eight inchworms on 37160 Mustad hooks and sent them off with four each. The plan was I’d tie up a dozen more and meet them at ground zero.

Jim’s kit was a used plastic emergency aid container with odds and ends fly tying tools and next to the aid box and wrapped in a towel a vintage clamp-down type vise. I found a wood crate, turned it sideways, and used it as my tying desk. The thread I chose was black, unmarked and thick – probably 3/0 thread, 37160 Mustad hooks [#10, #12, #14], chartreuse chenille, and head cement. I made the tail extend about a half inch beyond the hump, an arch tied off at the hook bend from about the eye. I made about six +/- wraps of the black thread to create a head at the hook eye and anchored it with a dab of clear head cement. I had a magic marker in my truck, so I dabbed the chenille with several symmetrical black dots. An artistic need.

My welcomed return met with “gimme”

We split for new water beyond the bend, Jim insisted on bringing his cell phone even though it wouldn’t get reception up in these GA/NC mountains. We agreed to meet-up at around 6:30 at the Land Rover. It had become a brilliant, rich late June day.

This is a Bass Pro product name, White River. It is now available at Cabela’s which is owned by Johnny Morris’ Bass Pro. I think it was $50 a few years ago. Try your local fly shop first. They never seem to buy junk.

The fishing reports were honest; we’d all been there and done that. Only Angie could remember what and how many she caught – 18 [three browns, one brookie, two basses, and the rest rainbows], Jim seemed to have landed the biggest – an 8-pound brown, and I was the rainbow-talker that day with something like a dozen liking my green inchworms. Nobody mentioned the inchworms I’d tied, but I thought they were excellent.

Before the following weekend and getting back at the farmstead, I ran over to Andy Bowen’s Cohutta Fishing Company in Cartersville, Georgia and grabbed the last two Scientific Angler’s fly tying travel kits for $50 each.

When I gave Angie hers she looked puzzled and said, “What would I do with this?”