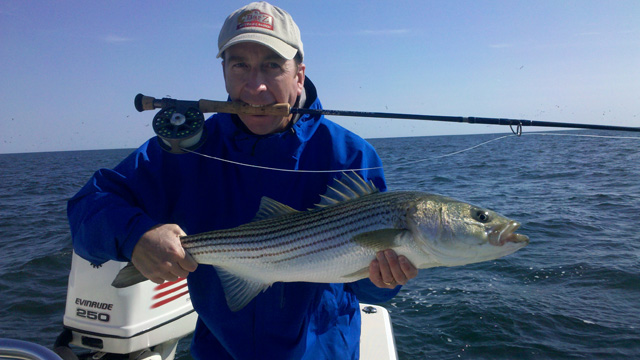 By Andrew August 6, 2013 No Comments
[dropcap]W[/dropcap]hen most waters around Long Island, NY are getting too hot for really good top-water fishing, the waters surrounding North Fork manage to hang in there. With bonito making an occasional appearance, as they have of late, and the albies generally showing up in late August, the striped bass and bluefishing gets nicely rounded out creating a pretty impressive and dependable bite. Early mornings  and evenings tend to be the ticket for the bass. Coaxing them up in shallow water rips with poppers, plugs and streamers can be really exciting as well. Watching a jazzed up large striper whack a fly on the surface is just cool anyway you look at it, let alone in the heart of the summer in New York State. Nearby Atlantic waters

provide the East End with clean cool water that fuels the great fishing the area has to offer through the warmer summer months. Also of vast importance is the sheer volume of bait in the area at this time of year. For instance, right now there is a major abundance of butter fish that fish are really keying in on. Watching fish pick off butters on the falling tide is great. They love butterfish, the tasty little morsels of protein on a virtual conveyor belt. In addition, they key in on spearing, eels, crabs, shrimps and snappers. Speaking of snappers, the area is rife with them as well as their larger brethren in 3-15 pound range. Bluefish snobs need not apply. These behemoths that show up are aggressive and will fight and jump all the way to the boat, dogging you every chance they get. Pound for pound, they will fight as well as just about any gamefish. Albies generally start to show in the latter part of August. (photo by A. Derr)

Albies generally start to show in the latter part of August. Shortly after they start to be seen in Nantucket, they tend to show up somewhere between Orient and Fishers Island. There are some really prime fishing areas that they frequent before setting up shop in Montauk for the well documented pre-migration feed bag in mid-September. And finally, the hallowed East End bonito bite is something of an enigma. While one needs to have an element of luck to get shots at the now elusive bonito, this is a good a place as any to wager your efforts. There are some of the traditionally most productive bonito spots in close proximity to productive summer bass and bluefish water. Recently, we have had some bonito sightings and are excited by there presence. Here is to hoping it comes together, they hang around and we get a really good bonito run this month. I know I’ll be checking my spots with a keen eye and be ready to fire next time they show, (hopefully within 100 feet of my boat!). More to come on this. Personally, I think they know they taste good and make themselves scarce because of it.

Fun for all ages.

Summer months on the North Fork offer not only great summer fishing, but great beaches, restaurants, farm-stands, wineries, and music.

For more information on chartering a boat on the East End, go to: www.longislandonthefly.com

For more information on visiting the North Fork go to: www.northforker.com