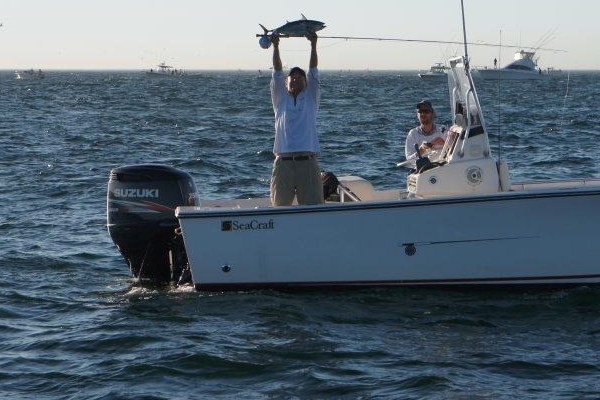 [dropcap]A[/dropcap]fter years of prodding from my friend and fellow fly-junky, Andy Derr, I booked a few charters with him for late September off Montauk in the hopes of catching the early part of the annual migration.  While we were still early for the full feeding frenzy and the famous blitzing bass, we did manage to give this angler enough of a taste to make this an annual pilgrimage.

As I traveled north from Maryland to Long Island, I thought about my first trip to Montauk a dozen years earlier in my fly life……I met my fishing partner at his place on Oyster Bay before traveling out east to meet our guide.  After several hours of rough seas and no fish, we cut bait at the half day mark and headed home stinging from the guide’s bill and lack of fish.   Fast forward to this September.  With infinitely more patience, experience, and skill I headed out east again in pursuit of football shaped albies and monster stripers.

So my buddy Graham and I hit the road early on a Sunday and made the trek to Montauk to meet Capt Andy at the dock by 7:00am.

After stowing gear and topping off the tank we left the harbor for the rip.  Tossed about like the Skipper and Gilligan, we arrived harried at the first spot and started looking for signs of active albies, false albacore – a relative of both, the mackerel and tuna.  Shortly after, we started to see breaking fish and working birds.  Motoring from school to school without result quickly proved futile and frustrating.  Nothing is worse than seeing other boats hooked up all around you, fish breaking, and no bite on your fly.  And that was what we were experiencing.  Finally, Capt. Andy threw a hail Mary with a spinning rig and hooked a fish proving they were not invincible.  After wrestling one in on a pink Sluggo, we caught sight of our quarry and broke the boat’s skunk. 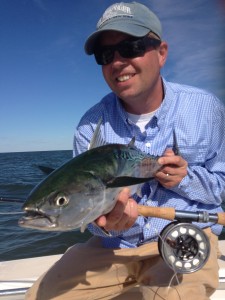 Author with the Green Speed.

Soon after Capt. Andy showed us the way, I hooked into my first albie.  My partner had generously given me the bow of the boat, and I flailed a cast to a group of moving fish.  With a little skill and much luck, the fly landed in front of the pod and some disparate tunny gulped my little pink fly and we were off to the races.  After watching my line and backing dwindle, I suggested that we might need to follow the fish; my partner and captain both guffawed and continued to watch my panicked face as the little albie ripped off line with impunity.  Finally the poor thing got tired after much heat  from my drag and managed to turn and swim aggressively my towards the boat.  Graham and Andy laughed hysterically as I tried to pick up the line fast enough before finally pulling the weary fish along side for a quick photo and release.  No bragging, just fact – I’ve caught some big, fast fish in my life as a fly fisherman, but nothing has compared to the brute, pound for pound strength and pulling ability of the false albacore, nothing. 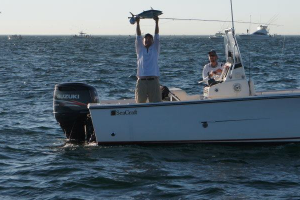 We got the fish in and spared us the fly-skunk on the day before finally calling it and heading to the West Lake bar.  The veteran, Graham suffered nobly without a fish, but swore revenge on Monday.

Motoring out in calmer water was welcomed while we started to look for our first breaking fish;
thing were no better, unfortunately.  We saw loads of breaking fish and a few hooked up boats, but no greenies tight to our lines until I handed the captain my rig for a try… I fish a lot of Scott rods with Bauer reels, and my buddy simply wanted to test the casting acumen of my latest stick.  Only seconds after complimenting me on its stiffness, our captain had hooked into a albie while blind casting – such is life.  If my partner were not the captain’s brother in law, we may have sent him for a swim. 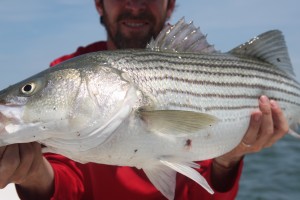 With a dwindling tide and nothing breaking, we decided to take a gander down the south side with some fast sinking lines in search of a few large stripers.  So we set up a drift with the current we had left and started to blind cast and shoot the breeze a bit.  No sooner had we started the drift then we started hooking into stripers.  We doubled up and both landed nice fish.  On the next drift, I felt a tug on the 10 weight that the captain had rigged for me.  With one good run but little else in the way of extreme force, it was hard to tell the size of the fish, but I thought it might be better than what we had already seen.  I was right.  When the small swell rose next to the boat and we got a glimpse of the fish, we were shocked at its size.  Once alongside the boat, we gently gripped the fish and took measurements before a live release; my first big rockfish (Maryland Chesapeake speak).

We failed to hook into any albies on the fly that afternoon and were marginally satisfied with our catch of stripers, but the experience of being on the water with Andy and my dear friend, Graham, imprinted upon me the need to commit to this trip every year.  I will eventually hit the big blitz I have craved, but in the meantime I will savor the trips where we may just fall a little short.