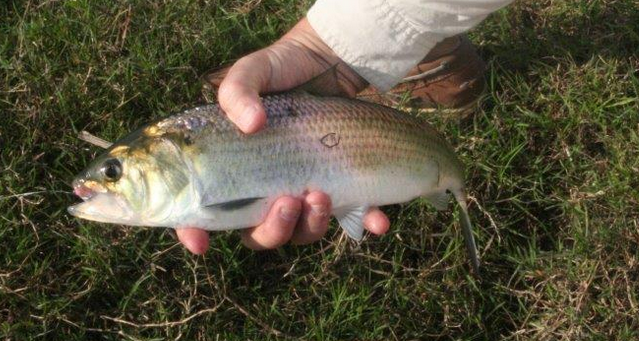 [dropcap]D[/dropcap]espite recent reports about declining American shad runs, the St. Johns River in Florida is back producing. In addition to good numbers of shad, anglers—especially upstream from Puzzle Lake— have encountered small bass in numbers, along with a wide array of colorful pan fish.

Shad-fishing authority Phil Woodham of Titusville suspects that the turnaround has to do with the weather. As he puts it:

“We were only catching a few (shad) before the recent warming trend. Now they’re back in numbers.” He added that both shad and pan fish have been hitting baitfish on top—supposedly an anomaly as far as the shad, which are anadromous migrants that ascend rivers to spawn. The pan fish that Phil was referring to include everything from crappies and bluegills to red-breasted sunfish: a piscatorial smorgasbord that reads like a Who’s Who of pan fish in southern waters.

After hearing the news, my neighbor and I decided to make the trek. George and I had fished with Woodham before and, along with the fishing, we looked forward to his good-natured company. Lucky or not, we’d have a good time with the unofficial proprietor of “Woodham’s Shad Service.”
Another St. Johns “plus” is the scenery. While city folks might feel a bit out of their element, even apprentice outdoorsman can’t resist the backdrop—one of cattle, bald cypress and innumerable water birds that rise in unison from the acres of marshland. With the exception of gators and a few otherworldly-looking steers, the banks—if you can find them— are empty. And if you catch the right day, all you’ll hear is the wind.

The St. Johns gently meanders, due to the limited gradient—a convoluted artery that dissects a several mile-wide floodplain, while diffusing and re-forming as it flows towards the sea. Since shad look for current, the run peaks sequentially at different locations, depending on water levels and rainfall amounts: factors that influence the speed of the flow. Phil has it all dialed-in. He’d mentioned earlier during a phone conversation that the river had only recently returned to its banks. By the time we left Ft. Lauderdale, the river had receded further. I recall forging ahead through the morning fog and arriving at the launch ramp just before noon. Now, just so you know: A number of authorities view shad as a “midday fish.” While I’m not among them, I’m not an early-riser.
After a round of pleasantries, Phil launched his skiff and headed upstream towards a distant tree line. At one point we heard the cough of an airboat: one of the few mechanical sounds we heard all day—a blessing that has become scarcer in recent years. We were rounding a bend when Phil brought us up-to-speed;

“Remember the S-Curves? That’s where the shad were the other day. See that sod bank? That’s where they first showed-up last month.”
He concluded his explanation with an intriguing prediction:

“You’ll see all kinds of fish hitting minnows. The other day, I talked with two guys who were walking the bank where we’re headed. They had caught a hundred fish.”

He was right on the money. From what we could tell, the current was flowing well, despite a north wind that riffled the surface. We ran past several more bends before Phil eased off on the throttle.

It was like we were floating in a huge aquarium. Swirls pocked the surface wherever we looked. Phil decided to ground the skiff, so we could walk the bank and cover more water. From where we were sitting, the current was awash in swirls.

We wasted little time in rigging our gear. George and Phil opted for ultralight spin gear— rigged with lead-heads and ribbon-tail grubs—I chose a fly rod equipped with a floating line and the tiniest of bream bugs. Since whatever they were were hitting small baitfish, I tore-off the legs— in hopes of creating a more-accurate imitation. It worked like a charm.

My spin-fishing cohorts hooked-up every few casts. Meanwhile, I could barely drag my bug a yard without evoking a strike. Most risers, I admit, turned-out to be bluegills, but we hooked double and triple-headers on a regular basis. And all the while, shad were jumping around us. But getting one to bite was a different story—including when I switched to a wet fly.

George slowed down his retrieve and eventually hooked and landed several on an eighth-ounce lead head and Beetle Spin combo.
Phil and I had yet to break the curse, while we racked-up a species list that included bluegill, crappie, red-breast (a colorful sunfish that inhabits certain North Florida streams), stumpknocker, pumpkinseed, a possible shellcracker (other sunfish, all), along with small bass. Eventually, between the three of us, we managed to land over a hundred fish.

But it didn’t take long for our interest to flag. We were, after all, after “nobler game.” While these fish were small, the shad were much larger—a consideration that eventually prompted Phil to back off the bank and head farther upriver. I knew where he was headed from his verbal description. We’d all caught shad there on previous occasions.

Today, we discovered, would be no exception. Phil anchored in mid-current and, within a few minutes, we were into fish. They were shad for a change, and while the majority were 1 ½ to two–pound “bucks” or male fish, we hooked enough larger “roe” shad or females to keep our interest up. Here’s where George enjoyed his finest hour. He’d land three to my one while Phil, who laughed at my efforts, dangled a grub off the stern with his 14-foot “Bream Buster” (a collapsible fiberglass crappie pole with no reel attached)—which bears a striking resemblance to today’s tenkara.

By late afternoon we were all surfeited. We’d caught a boatload of shad (although all were released), and a long drive awaited us. As we sped to the ramp, George made a pronouncement that captures the charm of the Upper St. Johns:

“The only things I smell here are grass, fish, and cow flop.”  He was right on the money.

SIDEBAR: Shad enter the St. Johns at Jacksonville, but only become available to anglers farther upstream. Most years’ runs are confined to the area between Highways 46 and 50, give or take a few miles. Although this is a non-tidal, totally-freshwater fishery, it’s my understanding that anglers who fish for shad are required by the State of Florida to have both fresh and saltwater fishing licenses.

Steve’s book has been dubbed the best book ever written about how, when and where to fish South Florida on foot. Nobody knows South Florida’s rivers, bridges, ditches and canals better than Kantner, aptly and affectionately called the Land Captain.  My copy of his book lives in my SUV.