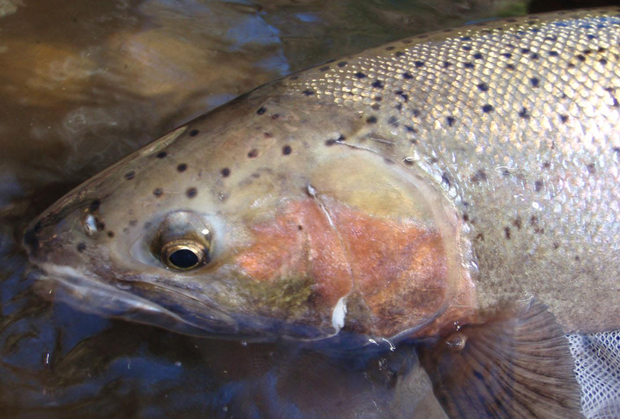 Feature Story: About steelhead; the fish of a 1,000 casts

[dropcap]A.[/dropcap]s the air cools the days shorten and when the deciduous-trees go vivid in color, fly anglers start dreaming about migratory rainbow trout called steelhead. October is the official launch of the Great Lakes steelhead season. It usually peaks between Columbus Day and Thanksgiving. Some, of course come earlier, and others will run upriver and into tributaries throughout the winter. An angler fly fishing for steelhead in February is a common sight. Try casting an iced up flyline!

The technique of fly angling for ‘steelies’ has morphed through the years and the west coasters and now Alaskans are almost 100% into spey casting, swinging flies with skagit and scandi heads and a myriad of different leader add-ons.  These are short 7- to 12-feet or more and are called by company product nomenclature like poyleaders or versileaders. These leaders allow a floating line to have sinking qualities. They come in a variety of sink rates – rated inches-per-second (IPS). They are inexpensive – around $10. We used to be wasteful. Some clowns kill for the boast of it. NOAA image ca. 1942.

Many believe that spey casting for these torpedos is not as productive as standard single-handed rods. That well may be true, but to lump switch rod casting into that less productive category is just plain incorrect. A switch rod angler will cover more water (distance) and have his or her fly in the water much, much longer than any single-handed angler. I’ve never seen a fish bite a false cast. Too, with a switch rod you can use the flyline from your single-handed rods. However, to be able to load a 7-weight switch rod, you’ll need to put on anywhere from 10- to 12-weight flyline – the line has to be able load the rod. There’s big learning curve when anyone takes-up spey angling, but it’s easy to learn switch casting. if you’re already proficient at single-handed casting because you can overhand cast a switch rod.

The native west coast variety of steelhead run up rivers to spawn, and otherwise live in the Pacific Ocean. Steelhead have been stocked in the Great Lakes tributaries for decades. The Great Lakes steelhead use the “lakes” as their ocean and can be fished for with specialized gear from boats. In the fall, steelhead instinctively swim up the Great Lakes’ tributaries where they were born (even hatcheries fish) and the fun begins anew. Steelhead are called the fish of a thousand casts, and for good reason. With the exception of early season returnees, a highly productive day is hard to come by.

The native Pacific steelhead cohabits water with Chinook and coho salmons. Chinook are huge. The IGFA All Tackle Record is 97-pounds, 4-ounces – Kenai River, Alaska in 1985. The IGFA Fly Record is 63-pounds on 16-pound tippet – caught in the Trask River, Oregon in 1987. The hooked coho salmon is considered to be comparable to steelhead in fighting spirit. The IGFA All Tackle Record for coho is 33-pounds, 4-ounces – caught in the Pulaski River, New York in 1989. The IGFA coho Fly Record is 19-pounds, 9-ounces – caught on 8-pound tippet on Kodiak Island, Alaska in 1992.

The Pacific salmon will run up the rivers and tributaries of their birth, spawn and die. They do not eat on their spawning run and bite out instinct or annoyance. However, steelhead and the Atlantic salmon do feed on their spawning runs, do not die, and return to their respective waters post spawn – Pacific Ocean (Steelhead), Great Lakes (steelhead) and Atlantic Ocean (Atlantic salmon).