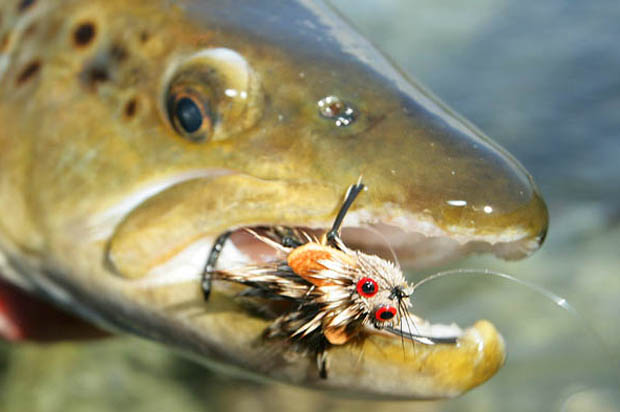 [dropcap]I[/dropcap]n South Florida, fishing is good year ‘round with better always just around the corner. Species of every kind make their way there during every calendar month of the year, both short or long stays, or they are permanent residents. Included in the mix are many varieties of bony fishes (Osteichthyes – 98% of all fish) and several species sharks (Chondrichthyes).

As for the broader southeast, and most of the other states, as well as Canadian provinces, it’s fly tying time until the winter weather and water turn on the pescados. Some anglers do hit the salt north of Palm Coast, Florida in the winter, redfish coming to mind, and trouts and other animals for the hardy fresh water anglers.

When the weather breaks, the fresh water rods in Georgia, North Carolina, South Carolina and Virginia head to their portion of the Appalachians and its foothills to match the first hatches of the season.

Then the heat arrives, and perfect is over until fall, and in years with little summer rains, rivers and streams shrink and heat up – chasing trouts to deep water and cover during the day. They do feed, but it’s mostly at dawn and dusk, or if rains do come and cool the water.

Tailwaters get a special dispensation because dams feed water from the bottom of their impounded waters, which means a lot colder. That keeps trouts and other animals happy and busier than their kin stuck in hot water.

A shrew is like a mouse and found in abundance in Alaska. It is also an overwhelming favorite of trouts. This 19-inch rainbow trout caught in Alaska’s Kanektok River, within the Togiak National Wildlife Refuge, was found to contain nearly 20 shrews in August 2009.
Credit: Alaska Department of Fish and game.

In Alaska, trouts have a very short feeding calendar so they gorge feed. Interestingly, they have unique adaptation to their seasonal conditions. They can expand and contract their stomachs to meet their survival needs. However, a “conventional” fly pattern presented on streams and rivers that are rich in salmon eggs is like having a waitress ask you: “ Do you want a cold, burnt hamburger or a perfectly cooked ribeye?” No takers, ever, on the cold burger.

Faced with the dilemma of trout fishing the North Fork of the Goodnews River in Southwest Alaska, which was choking with trouts and salmons. I couldn’t get one trout bite. Our guide was only a boat driver so I turned to my friend Jim Brooke, giving him a ‘wah’ look. He said: “Do you have any deer hair mouse flies?” I replied in the negative. He gave me four. They all had longish tails. I thought for a minute and our ‘driver’ piped in: “They’ll eat those.”

I tied on a bare 10 or 12 size hook, attaching it to the mouse hook with 8-pound mono and then to the mouse tail with a Duncan Loop – keeping the hook tight to the tail so it wouldn’t foul.

First cast I thought errant because it landed on the bank. When I pulled it free, it plopped in the water and bam

For the next few hours Jim and I hammered trouts along the shore line. Our learned trick, cast to the  near ground then let the mouse plop in the water, and pow. Some bows knocking the mouse a few feet in the air and then hitting it for the take. Dollies pounding the mouse as well (Dolly Varden are actually char, not trout).

During the rest of our week long stay we caught char using the same ploy. Only larger graying took the bait, but smallish bows, around 16-inches, were up to the task.

Summer is here in North Georgia and the trouts are beginning to hide. I’m going to try a little mousing as soon as I tie up a few dozen deer hair mouse flies. I’ll let you know how the mousing goes