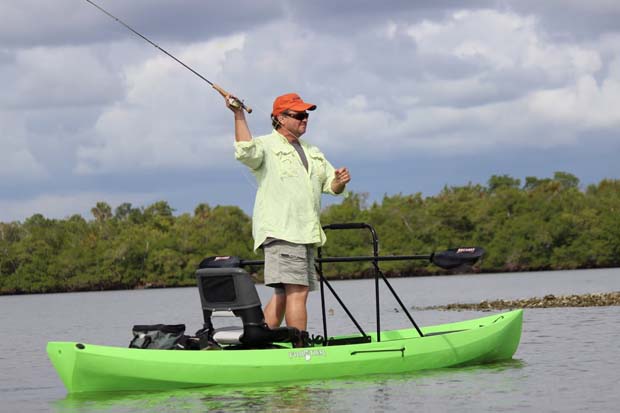 Feature Story: Is it a canoe, SUP board, kayak, dingy or drift boat?

The monickers for these paddling vessels are beginning to blur

At the ICAST Show in Orlando, Florida (July 14 through 17), there were more eye candy products to view, touch, use, fondle, cast, take apart, sit in, stand in and get expert advise on than any boat show we’ve ever been to, and that includes Miami and Ft. Lauderdale’s spectacular international versions.

One of the things that was noticeably a full court press with attendees was anything having to do with ‘paddling’. As a matter fact the ICAST 2015 Overall Best of Show went to Eddyline kayaks’ C-135 YakAttack Edition. The Johnson Outdoors booth (Old town Canoe, Ocean Kayak, Carlisle Paddle Gear and Extrasport) was Grand Central Station from the opening bell to the closing bell. Booth visitors literally had to wait in line to talk ‘paddling’ to a swamped sales staff.

The devotees to ‘paddling’ conveyances are probably the largest single group of outdoors folks in the world. They consist of folks from every known outdoor activity and add to their ranks those who have converted to ‘paddling’: hiking, birders, every kind of fishing (inshore, offdhore, lakes, rivers), hunters, photographers and nature lovers.

Today, it would be hard to just say it’s a kayak, a canoe or a SUP board because the innovations to each can often blur that looks-like distinction

Back in the day, canoes and kayaks were used only as a sit down means of transportation. The engineering to these kayaks, SUP boards and canoes are not just sit down transporters. Almost anyone can standup on any of them, comfortably – some of course easier than others.

There’s a dramatic difference for an angler peering out from a seated position in a kayak or canoe that puts his or her view four feet from the waterline to looking down from six feet above the waterline. In fishing, the catch rate difference, we’ve been told, could be as much as 5X better from a height advantage. Hard to argue if site fishing is the matter at hand.

The newest innovation has caught on with space challenged metropolis types that have a thing for being on the water and outdoors. These new water transporters are inflatables, packing down so they can be stored in an apartment closet and pitched into the trunk. One such producer is Alpacka Raft with pricing from around $600 to $2,000 and weighs only 7-pounds, but has a capability to haul 500-pounds

The other inflatable we found was in the form of a drift boat made by Flycraft USA called Stealth Base, the only model it makes. It’s a much sturdier version that weighs 98-pounds (not counting luggage rack on oars), costs $3,000 and has several don’t leave home without them add-ons that push pricing up another $600 / $700. It can also be outfitted to handle up to a 10 HP outboard. Feature Image by Joe Mahler fishing out of NuCanoe west coast of Florida.